The posterior cerebral circulation consists of the vertebrobasilar system. Any defect in this system can give rise to stroke. The incidence is 20 to 25% (17–40%) of all the strokes. Leading causes include basilar artery stenosis or occlusion (~40%), small artery diseases (15%), and cardiac embolism (13%). Other causes are arterial stenosis, occlusion, lacunar lesion, or potential cardiogenic source of embolism (13%) and unknown (10%). Early recognition of posterior circulation stroke can prevent morbidity and mortality. It is more difficult to recognize and treat than other types of stroke.

Magnetic resonance imaging of the brain 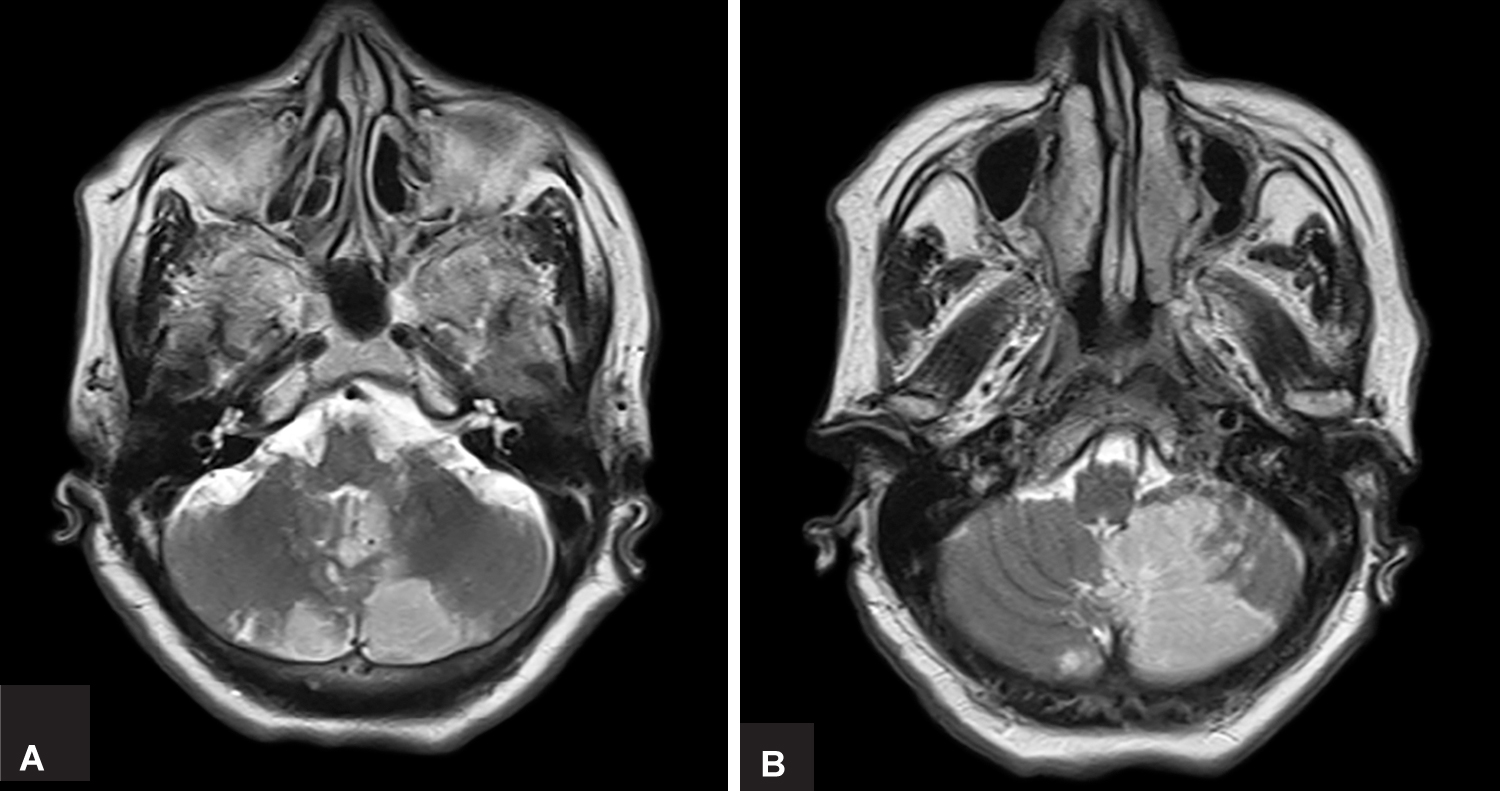 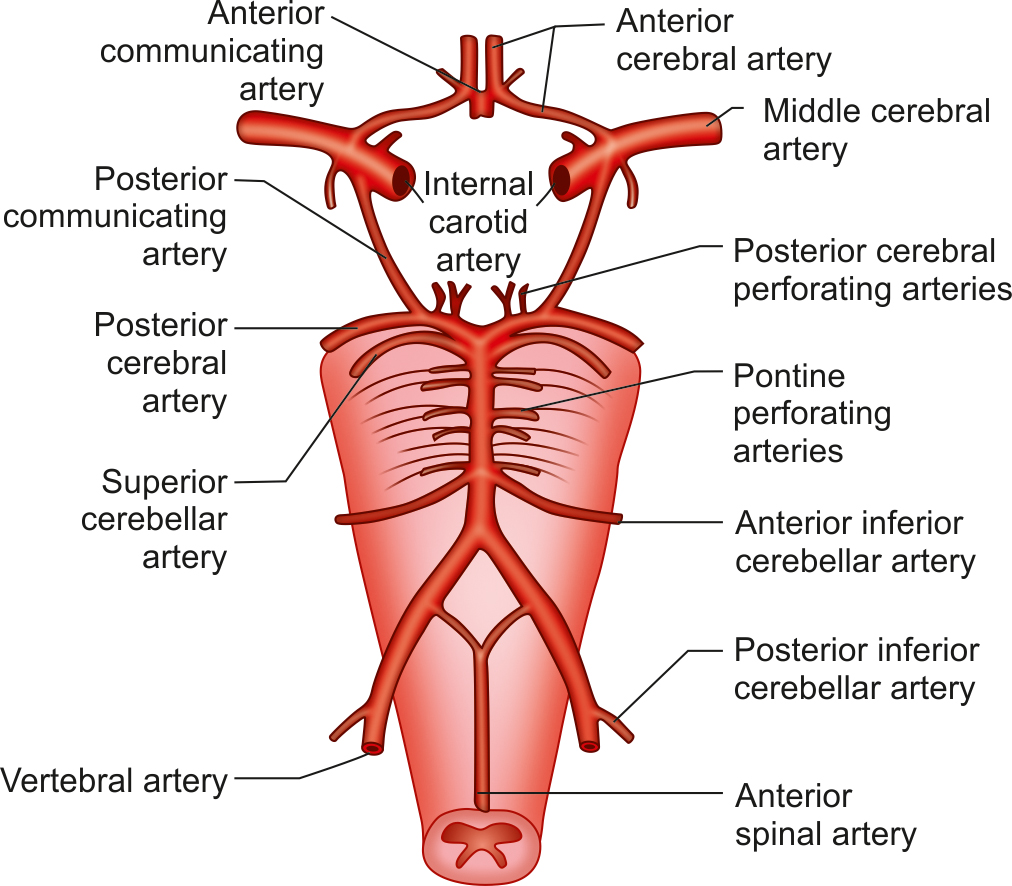 Posterior circulation (Fig. 2) ischemic stroke is a clinical syndrome associated with ischemia related to stenosis, in situ thrombosis, or embolic occlusion of the posterior circulation arteries, and their branches. Most common causes of posterior circulation stroke are occlusion or embolism from large artery vertebrobasilar atherosclerosis or dissection, and embolism from the heart.1,2 Well-known risk factors include hypertension, smoking, hypercholesterolemia, atrial fibrillation, and coronary artery disease. As the blood supply (Fig. 2) to the brainstem, cerebellum, and occipital cortex decreases, patients complain of dizziness (47%), diplopia, dysarthria (31%), dysphagia, disequilibrium, ataxia (30%), and visual field defects (24%). Acute-onset “crossed” deficit-cranial nerve territory symptoms on one side and sensory or motor deficit of the opposite arm and leg are virtually diagnostic of posterior circulation ischemia.3 Conditions like acute peripheral vestibular dysfunctions, basilar migraine can mimic posterior circulation stroke.

Early recognition of posterior circulation stroke is difficult compared with other types of strokes. If recognized early, morbidity and mortality can be significantly brought down.

Diagnosis of posterior circulation ischemic stroke is based on history and rapidly developing clinical signs of focal or occasionally general disturbances of cerebral function, with no definitive cause other than that of vascular origin. We should maintain an index of suspicion for posterior circulation stroke in patients presenting with acute neurological symptoms. It is important to establish the onset and tempo of symptoms, such as acute diplopia, visual field disturbance, or swallowing difficulties in the initial assessment phase.4 Recognition of stroke in the emergency room scale may be used in diagnosing the stroke in the emergency room. Doctors in the emergency department can rapidly recognize acute stroke using this tool as it includes assessment of visual fields.5 All cases of suspected stroke require urgent brain imaging with computed tomography or MRI to exclude hemorrhage. Magnetic resonance imaging has been recommended for assessing transient ischemic attack (TIA) and the posterior circulation defects as per the current international guidelines. Magnetic resonance imaging provides the greatest diagnostic yield when performed as soon as possible or within a few days of onset of symptoms, especially in minor stroke or TIA.6 In an emergency situation, airway, breathing, and circulation should be maintained. Intravenous tissue-type plasminogen activator may be used in patients with posterior circulation stroke who meet the eligibility criteria, within 4.5 hours of onset of symptoms.7 Acute endovascular therapy like intra-arterial clot removal or lysis has been used in acute basilar occlusion because of the high likelihood of death or severe disability in the absence of recanalization.8-10 Neurosurgical intervention with or without external ventricular drainage or decompression may be lifesaving.11

Delayed or incorrect diagnosis may have devastating consequences, including potentially preventable death or severe disability if acute treatment or secondary prevention is delayed. So early recognition and treatment is the crucial step in the case of posterior circulation stroke syndrome. Newer emergency treatment options and stroke prevention policies specific to the posterior circulation are areas of active research.