Diabetes mellitus is a group of metabolic disorders accompanied by chronic hyperglycemia due to absolute or relative deficiency of insulin either due to secretion or action leading to disturbances in carbohydrate, protein, and fat metabolism. Diabetes mellitus is the major health problem of the 21st century. Rapid increase in number of diabetics has made the World Health Organization to declare India as the global capital of diabetes. Diabetes mellitus is increasing faster in Asian countries than in other regions. The present trend indicates that more than 60% of the world diabetic population will be in Asia. An increased prevalence of impaired fasting glucose was seen since 2000, more among the younger population <50 years of age. This is also an indicator of further increase in prevalence of diabetes, with a risk of approximately 50% conversion to diabetes over 10 years. The important risk factors for diabetes are urbanization, a racial predisposition, genetic risk, aging, obesity, and insulin resistance.1

Among intracellular ions, magnesium has a major role in tyrosine kinase activity at the insulin receptor level and also at the postinsulin receptor level of action of insulin. Magnesium also has a major role in carbohydrate metabolism; it acts mainly as a cofactor for glucose transportation across cell membranes, glucose oxidation, and also in the release of insulin. Magnesium participates at various levels of insulin functions like secretion, binding, and insulin activity. Hence, deficiency of magnesium may lead to disturbances in glucose metabolism and also at various levels of insulin secretion and its function in carbohydrate metabolism.2 Intracellular magnesium plays a key role in regulating insulin action, insulin-mediated glucose uptake, and vascular tone. Reduced intracellular magnesium concentration leads to decreased tyrosine kinase activity, postreceptor impairment in insulin action, and worsening of insulin resistance in diabetic patients.3 Clinically, hypomagnesemia is defined as serum magnesium (SMg) levels <1.8 mg/dL. The persistent hypomagnesemia leads to hyperglycemia and insulin resistance. Hypomagnesemia can be both a consequence and a cause for diabetic complications. The concept of magnesium deficiency in the pathogenesis of diabetic complications is still innovative. There is very less information about the core effect of hypomagnesemia in relation to the vascular complications in diabetes, which in turn occurs mainly due to various metabolic effect of chronic hyperglycemia.

This study was done over a period of 8 months between January 2016 and September 2016. The study was conducted to know the frequency of hypomagnesemia in type II diabetes mellitus patients and its relation with glycated hemoglobin (HbA1c).

This is a comparative case–control study, done at a tertiary care hospital. We recruited 200 diabetic patients from medical wards and outpatient department at RajaRajeswari Medical College & Hospital, Bengaluru, India. Study was done on 200 diabetic patients aged above 30 years, diagnosed for diabetes mellitus for more than 3 years. One hundred healthy subjects with no past history of diabetes were taken as controls.

Exclusion criteria include alcoholic patients, patients with diarrhea and vomiting, and patients who were using diuretics, antibiotics like aminoglycosides, amphotericin B, pentamidine, cisplatin, tacrolimus, cyclosporine, and proton-pump inhibitors.

A written informed consent was taken from all participants of the study. Institutional Ethical Committee clearance was obtained before study. About 4 mL of venous blood sample was drawn for the assessment of fasting blood glucose (FBS), HbA1c, and SMg level, and 2 mL of venous blood sample was taken 2 hours after breakfast for postprandial blood sugar (PPBS) level from all participants. The SMg level was estimated by calmagite dye method. In our laboratory, SMg level of 1.8 to 2.5 mg was considered normal reference value. Serum magnesium levels less than 1.8 mg/dL are considered as hypomagnesemia and were included in the study. The HbA1c levels were done by calorimetric method.

We have used descriptive and inferential statistical tools for analyzing the data. We have used frequency and percentages, analysis of variance, Student's t-test, and Chi-square/Fisher exact test as statistical methods. We have considered a p-value of 0.05 as statistically significant. 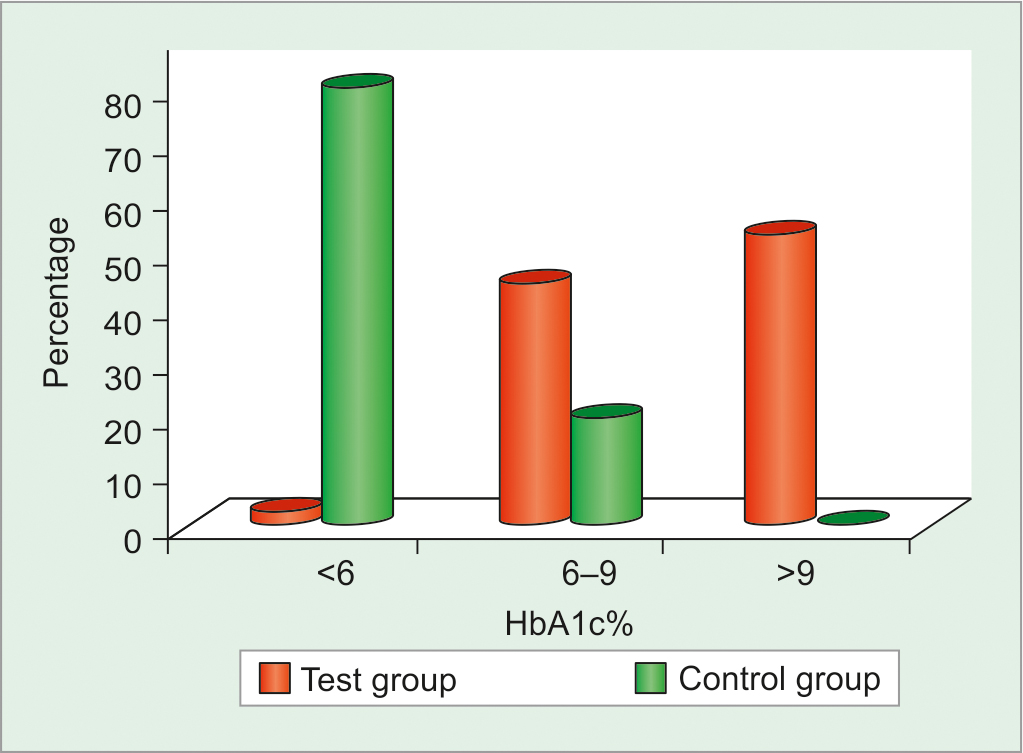 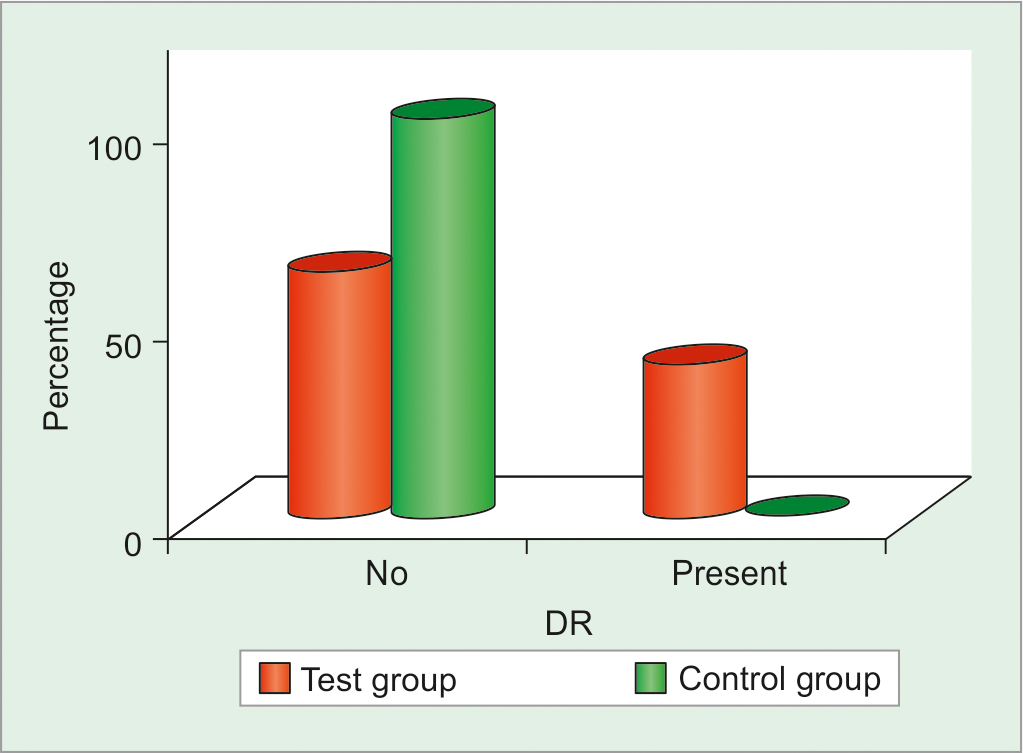 Relation between SMg and HbA1c 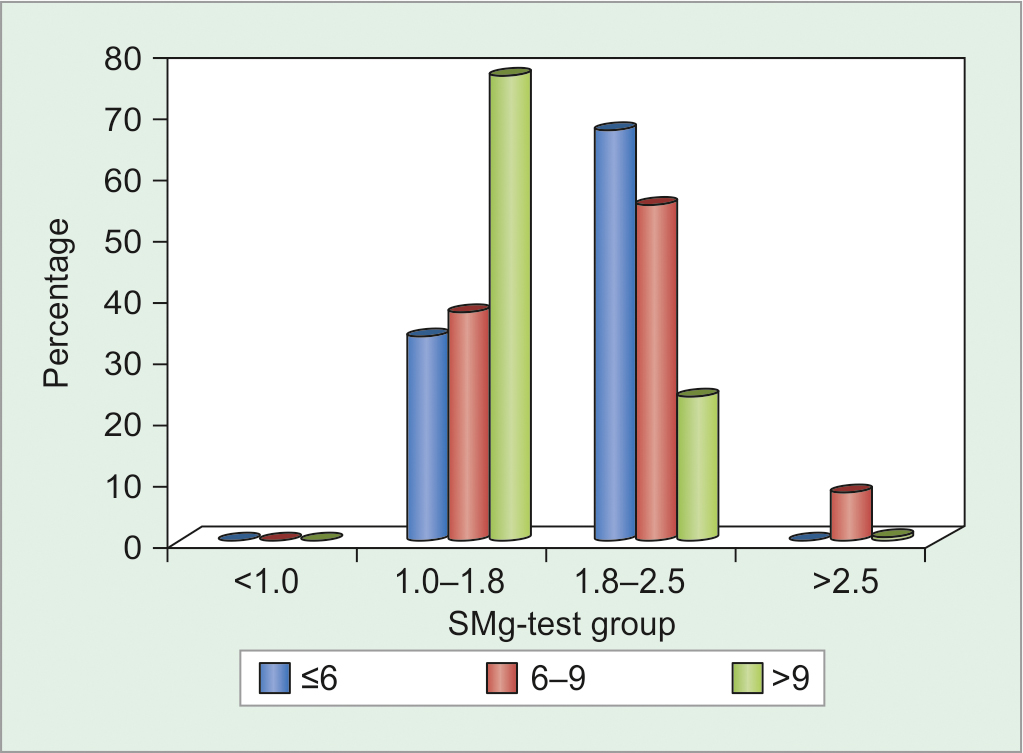 Among the endocrine and metabolic disorders, diabetes mellitus has more prevalence of hypomagnesemia of around 25 to 39%.4 Magnesium deficiency has been now implicated as a novel factor in the pathogenesis of many diabetic complications. Hypomagnesemia can be both a consequence and a cause of diabetic complications.5 The factors responsible for magnesium deficiency in patients with diabetes mellitus are osmotic diuresis and reduced renal tubular absorption of magnesium; insensitivity to insulin in turn affects the intracellular magnesium transport and thereby increased loss of extracellular magnesium and frequent use of diuretics can also lead to magnesium loss.6,7 Earlier studies have found associations between magnesium deficiency and insulin resistance, carbohydrate intolerance, dyslipidemia, and hypertension.8,9

Table 4: Correlation of SMg levels in relation to HbA1c in patients studied

Table 5: Comparison of clinical variables in relation to levels of HbA1c of patients studied

In the present study, hypomagnesemia was observed in 57.7% of patients with type II diabetes mellitus; similar results were found by Shaikh et al2 and Pham et al, who found hypomagnesemia in 55 and 47% of type II diabetic patients respectively.3,10 In our study, hypomagnesemia was associated with raised HbA1c levels in 75.5% of patients and it is consistent with other studies done by Shaikh and Viktorinova et al.11,12 We have observed that patients with high blood sugars and high glycemic index have increased prevalence of hypomagnesemia and increased prevalence of diabetic retinopathy. In diabetes, it is observed that inadequate metabolic control can affect the concentration of magnesium, developing hypomagnesemia, which has direct relation with micro- and macrovascular complications like cardiovascular disease, retinopathy, and neuropathy.13

In our study, we have found hypomagnesemia is associated with chronic hyperglycemia. Almost all microvascular complications of diabetes mellitus are related to the extent and span of exposure to hyperglycemia. The benefits of having good glycemic control in preventing chronic diabetic complications are a well-known concept. There are many studies probing into the issue of intensive blood glucose control in Type 2 diabetics. Role of Other factors contributing to good glycaemic control, like blood pressure control, lipid lowering therapy have also been under intense investigation. In this background, the concept of hypomagnesemia is still innovative for clinicians. Hence, physicians must learn to overcome clinical inertia in considering all the factors contributing to chronic hyperglycemia and treating them. We also need further studies on hypomagnesemia in type II diabetes and the effect of magnesium supplementation.