Chronic obstructive pulmonary disease (COPD) is a major cause of morbidity and mortality throughout the world, and is the fourth leading cause of death.1 By 2020, the World Health Organization predicts that COPD will become the third leading cause of death and the fifth leading cause of disability worldwide.2 The Global Initiative for Chronic Obstructive Lung Disease (GOLD) workshop report “Global Strategy for the Diagnosis, Management, and Prevention of COPD” presents a COPD management plan. This workshop report is based on the best-validated current concepts of COPD pathogenesis and the available evidence on the most appropriate management and prevention strategies for patient care. It has been reviewed by many experts and scientific societies all over the world.3 The COPD is considered as a multicomponent disease associated with chronic low-grade systemic inflammatory response, recognized as a risk factor for its systemic complications, such as coronary artery disease, stroke, and skeletal muscle dysfunction leading to weight loss and tissue depletion, and strongly influences the quality-of-life and increases mortality.4,5 Two patients with COPD experience a systemic inflammation, which can be assessed by measuring inflammatory mediators like C-reactive protein (CRP),6 lactate dehydrogenase-3 isoenzyme, tumor necrotic factor (TNF)-α, and interleukin-6. The COPD is associated with oxidative stress and altered circulating levels of inflammatory mediators and acute-phase proteins.7-12 Tissue damage or infection will stimulate hepatocytes to synthesize CRP, which is an acute-phase protein and has drawn the attention of investigators.

It reflects the total systemic burden of inflammation in several disorders including cardiovascular diseases, COPD, osteoporosis, and even depression.7,10-12 The main clinical value of CRP is its ability to reveal early inflammation when other clinical parameters are equivocal.13 High-sensitivity (hs-CRP) is a widely accepted biomarker in identifying the airflow obstruction.7

However, to know the usefulness of this as a marker in predicting complications and its prognostic value in COPD, further clarification is needed.

From having known that COPD is a multicomponent systemic disease and may be associated with elevated serum CRP levels, we planned the present study. As COPD patients have systemic as well as local inflammation, it may not be possible to evaluate them by spirometery test alone. Authors aimed to evaluate the hs-CRP in a group of COPD patients as an available and cost-effective auxiliary marker in determining COPD stages (GOLD staging) and assess the severity of disease for early and effective management.

This cross-sectional study was conducted in the outpatient Department of General Medicine, RajaRajeswari Medical College Hospital, India. Study duration was for a period of 1 year from June 2013 to May 2014 and conducted on patients with clinically and spirometrically confirmed COPD based on simple random sampling method from those visiting. All male patients above the age of 35 years, who were admitted with COPD and had been smokers for more than 5 years and subsequently confirmed by spirometry showing a percentage ratio of forced expiratory volume in 1 second to forced expiratory capacity of less than 70%, were included in the study. Patients with a history of bronchial asthma, a history suggestive of parenchymal lung disease and other bronchial diseases, such as pulmonary tuberculosis, pneumonia, bronchiectasis, interstitial lung disease, lung abscess, bronchogenic carcinoma, and a history of diabetes mellitus, hypertension, and ischemic heart disease, and those who are on ventilatory support, those with a history of any acute or chronic systemic infections, those with collagen vascular disease, and patients on inhaled, parenteral, and oral steroids were excluded from the study. Data were collected using a pretested proforma meeting the objectives of the study. Detailed history, physical examination, and necessary investigations were undertaken. Informed consent was obtained from all the participants after explaining the procedure. Patients were subjected to pulmonary function tests (PFTs) before administering bronchodilators. The PFT was performed using MIR-Spirolab III spirometer mini-flow meter (Rome, Italy). Three satisfactory efforts were recorded and best effort was considered. The hs-CRP levels were estimated by a quantitative immune turbidimetric test of plasma or serum. Patients were also subjected to other investigations, such as complete blood count with erythrocyte sedimentation rate (ESR), blood urea, serum creatinine, random blood glucose levels, chest roentgenogram, electrocardiogram (ECG), and two-dimensional (2D) echocardiography. The data were analyzed using appropriate statistical methods.

Distribution according to Clinical Diagnosis

Clinical diagnosis showed that 39% of patients presented with acute exacerbation of COPD, while the rest 61% presented with signs of chronic cor pulmonale, of which 30 patients had features suggestive of right heart failure.

Distribution of Subjects as per BMI

The mean hemoglobin was found to be 15 gm% with a standard deviation (SD) of 1.6. The mean total count was found to be 5,758.82 cells/mm3, with a SD of 1871. The mean ESR was found to be 16.53 mm at the end of 1 hour with an SD of 10.84. The ECG findings were suggestive of chronic cor pulmonale, i.e., QRS axis > 90, P pulmonale and right ventricular hypertrophy with right bundle branch block (complete or incomplete) were present in 55 patients, i.e, 53.92%. The 2D echocardiogram findings of chronic cor pulmonale were present in 55 cases, with the mean pulmonary artery systolic hypertension being 55.37 mm Hg. The posteroanterior view of chest X-ray showed evidence of emphysema in 58.8% and chronic bronchitis in 18.6% patients and was within normal limits in 21.66%. Distribution of subjects as per GOLD staging was that 38.2% of the patients belonged to GOLD stage III, 36.3% of the patients came under GOLD stage II, 13.6% in GOLD stage I, and 12.8% were in GOLD stage IV (Graph 1). When we distributed patients as per GOLD staging, 94.12% of the patients had hs-CRP values more than 0.3 mg/dL and the rest, i.e., 5.9%, of the patients had hs-CRP values less than 0.3 mg/dL. Distribution of subjects as per hs-CRP values showed that the majority of patients of all age groups had elevated hs-CRP. The p value was not statistically significant. Here, there is a moderate–strong downhill linear relationship (Graph 2). We found a strong correlation of hs-CRP with BMI and it was statistically significant. It also showed a weak-to-moderate downhill linear relationship (Graph 3). Correlation of hs-CRP with pack years was statistically significant. Spearman's correlation also showed a strong uphill linear relationship (Graph 4). When correlation of hs-CRP with GOLD stages and hs-CRP vs GOLD stage was done, Spearman's correlation coefficient r = 0.850, p-value < 0.0001 (statistically significant correlation of hs-CRP with GOLD stages was present as per Spearman's correlation, and it showed a strong–perfect uphill linear relationship) (Table 1). Correlation of different parameters like Age, BMI, Pack years, GOLD stages with hs-CRP is shown in Table 2.

Distribution of subjects as per GOLD staging 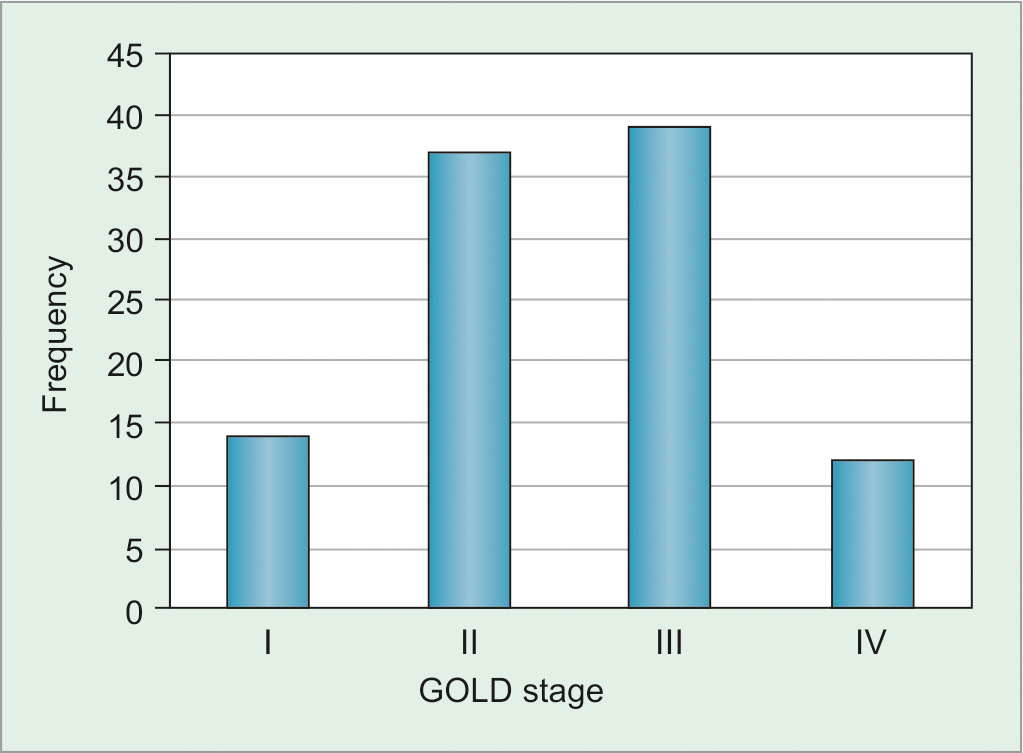 Distribution of subjects as per hs-CRP values 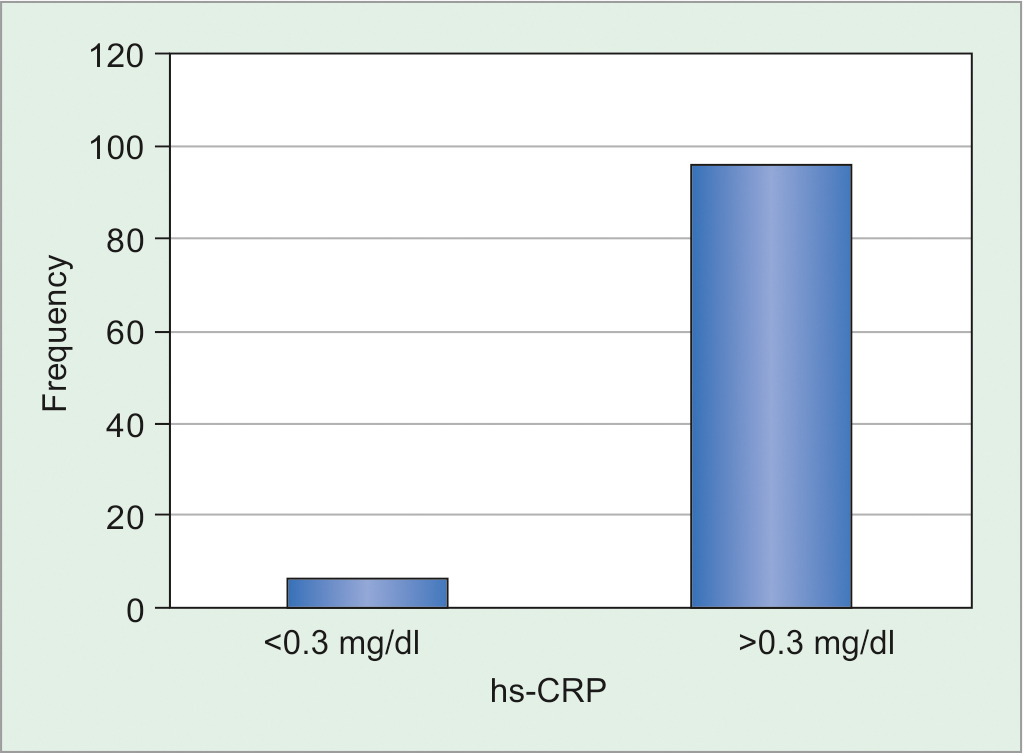 Correlation of hs-CRP with BMI 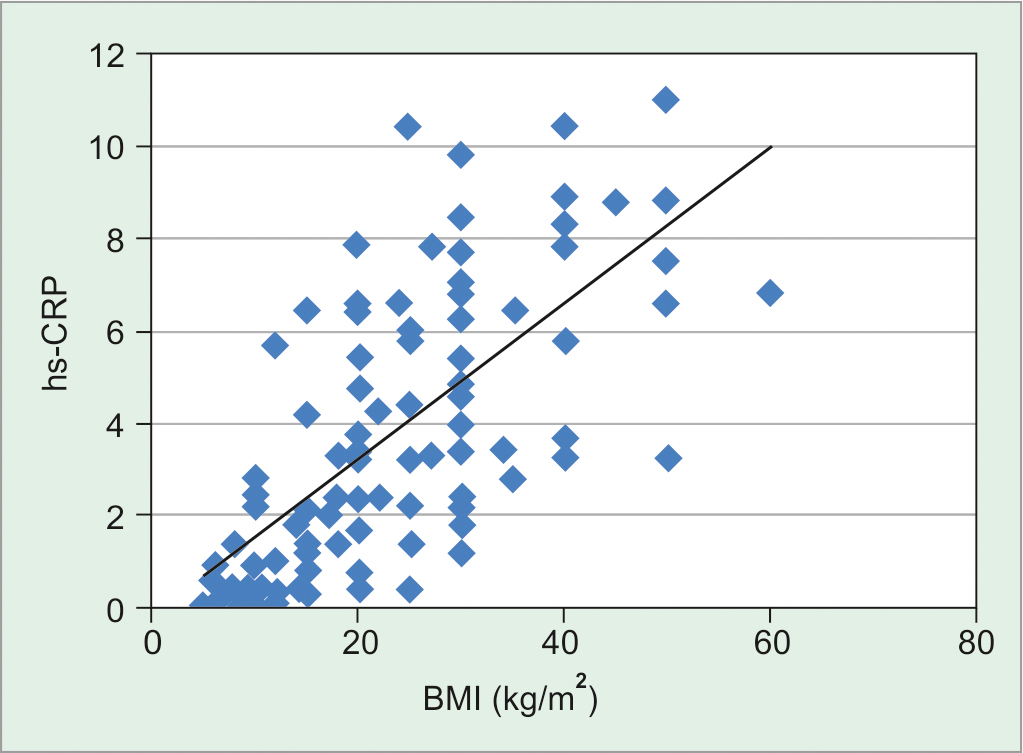 Correlation of hs-CRP with pack years 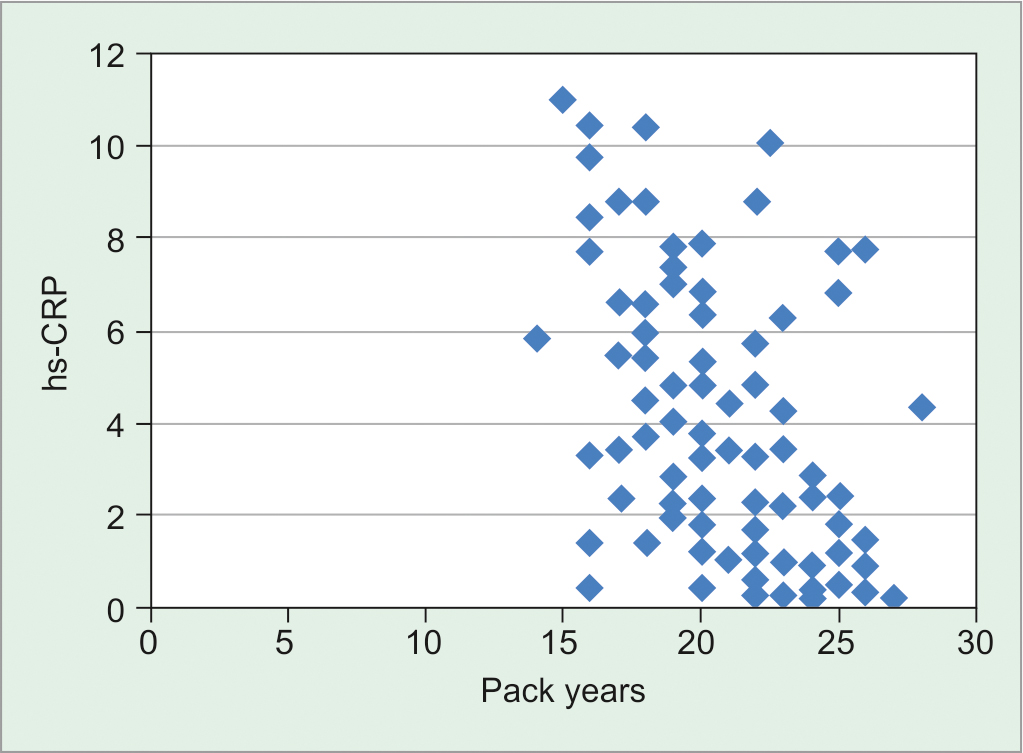 Many prospective randomized epidemiological studies have identified several independent risk factors for COPD, which include smoking, environmental pollution, increased age, and gender. Its pathogenesis is due to ongoing systemic inflammation. Several acute-phase reactants, cytokines, and soluble cellular adhesion molecules have been implicated in this process, with their plasma concentrations increased in a variety of systemic diseases. Furthermore, several prospective studies have shown that CRP is a predictor of increased systemic risk for myocardial infarction, stroke, or peripheral vascular disease in asymptomatic individuals with no known COPD. The COPD is a disease of late adulthood. Assessment of hs-CRP level cannot determine the severity of airways obstruction (FEV1) in patients with COPD. Considering the relationship of the exacerbation rate and other disease severity parameters, it may serve as a good predictor of patient outcome.14 As the age advances, the lung function declines and other risk factors add to the disease process.15 In the present study, the mean age seen is 64.75 ± 10.87, comparable with the results of Alavi et al,16 of 65.19 ± 10.66. Thiruvengadam et al17 and Kamat et al18 study groups had mean ages of 55.0 ± 18.00 and 50.0 ± 20.20 respectively, which are not statistically significant when compared with the present study. In the present study, pack years were not in accordance with other studies. Smoking is a very important risk factor for COPD and is seen in 85% of the patients who develop COPD. In the present study, 70% of the patients were smokers for more than 15 years, when compared with Mohapatra et al19 study group, which also had smoking history in males for more than 20 years. In our study, five patients had hs-CRP values <0.3 mg/dL. These five patients had normal chest radiographs with a relatively good PFT effort and a normal BMI. Their pack per year was also low in the range of 5 to 10 pack years, suggesting that it could be the onset of low-grade systemic inflammation consistent with COPD. Cessation of smoking in these individuals may lead to less morbidity and mortality. A total of 97 patients had raised hs-CRP values, i.e., >0.3 mg/dL. Of the 97 patients, 88 patients were in GOLD stages II to IV, suggesting that marked limitation of airflow was related to raised CRP levels. Patients who presented with right heart failure, i.e., 30 patients, had marked raise in hs-CRP levels. All these patients were under stages III and IV of GOLD stages. They also had high pack years value in the range of 20 to 60 pack years. According to De Torres et al,20 systemic inflammation exists in stable COPD. In COPD patients, systemic inflammation has been associated with reduced lung function, reduced muscle strength, and also reduced 6-minute walk test. In a Copenhagen City Heart Study, Dahl et al21 reported that prospective measurements of serum CRP in both crude and co-founder adjusted analyses were predictive of hospitalization and death from COPD. These results agree with numerous prospective studies that show that CRP is a strong predictor of future mortality. The main finding of our study was that serum hs-CRP level was significantly correlated to stage of disease (as gold criteria), which is comparable with Alavi et al22 study. We found a significant relationship between patients’ serum hs-CRP levels and age, BMI, smoking habits, and duration of illness in the exacerbation state. The COPD patients experience some degree of metabolic changes and muscle wasting, and this fact is associated with higher levels of inflammatory markers and hypermetabolic state. In our study, overweight and obese patients showed higher levels of CRP than patients with normal weight. In a study by Attaran et al23 in Mashhad, there was no relationship between BMI and hs-CRP level. However, in the Juan de Torres et al24 study in Spain, patients with higher CRP levels showed a higher BMI. Also, in Breyer et al25 study, obese patients showed higher CRP levels than normal weight patients. In their study, they analyzed the fat-free mass index (FFMI) in these patients. They did not find any relationship between CRP and FFMI. So, they did not get to a definite conclusion. In De Torress et al26 study, BMI was correlated directly with CRP, and they concluded that inflammatory markers, such as TNF-α and CRP had different behaviors relating to malnutrition or perhaps reflecting depletion of different components (FFMI vs fat mass respectively). The novel finding of the present study was that underweight patients, i.e., BMI < 18.5, constituting 29 patients showed higher hs-CRP levels than normal weight patients (that shows muscle wasting effects of systemic inflammation) as well as obese and overweight patients. It is widely accepted that smoking is the main cause for reduced pulmonary function in patients with COPD.

An increase in hs-CRP levels in relation to an increase in GOLD stages shows that this marker can be useful as an auxiliary marker other than PFTs in assessing patients’ status. Smoking is the most important risk factor for COPD as well as systemic inflammation in COPD, which strongly influences the quality-of-life and increases mortality, leading to weight loss, muscle wasting, tissue depletion, acute myocardial infarction, acute stroke, dyslipidemia, and malignancy. The main clinical value of CRP is its ability to reveal early inflammation when other clinical parameters are equivocal, thus warranting early aggressive management of COPD along with cessation of smoking.