Cardiac disease is an important cause of indirect maternal morbidity and mortality in pregnancy, with a reported incidence of 2% in pregnancies in India.1 Cardiac disorders contribute to 20.5% of maternal deaths.2

In India, the most common cardiac disease encountered during pregnancy is rheumatic heart disease followed by congenital heart diseases (Graph 1).3-5 Dramatic advance in open heart surgery in India has made women with congenital heart diseases to survive till childbearing age and the availability of lifesaving modern therapy gives them an option of pregnancy and motherhood. Also there is a rising incidence of acquired heart diseases probably attributable to the changing modern lifestyles. Obstetric complications like preeclampsia, anemia, preterm labor, and intrauterine fetal growth restriction are common in these women. Early diagnosis and a careful multidisciplinary management are mandatory for a good pregnancy outcome. 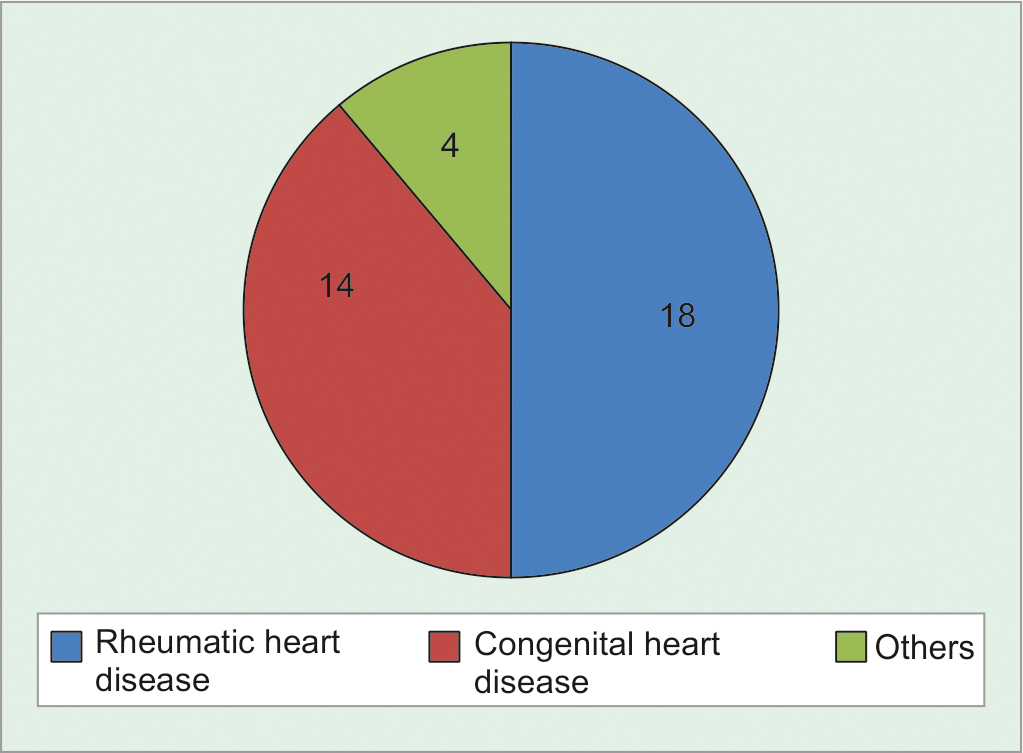 The present study is a descriptive study consisting of prospective data. It was conducted at RajaRajeswari Medical College & Hospital, Bengaluru, Karnataka, India a multispecialty tertiary care and referral center in Bengaluru from January 2014 to January 2016. During the study period, there were 36 pregnant women with cardiac diseases. These included both booked cases in antenatal outpatient department and unbooked emergency cases reporting directly to labor room, who gave consent for the study. 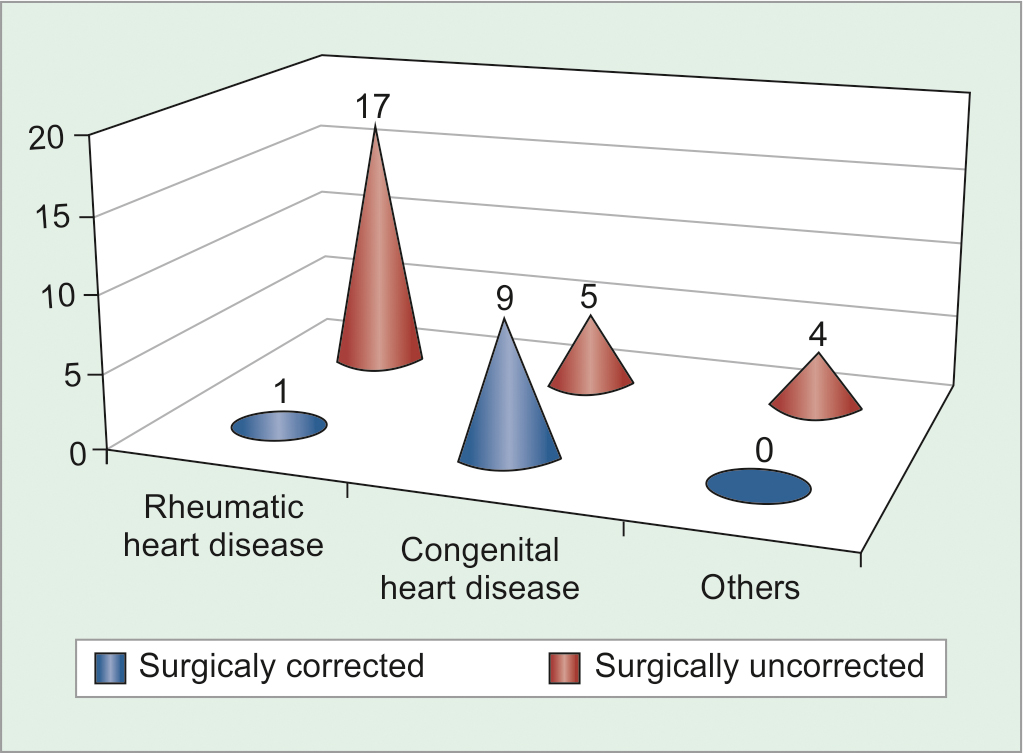 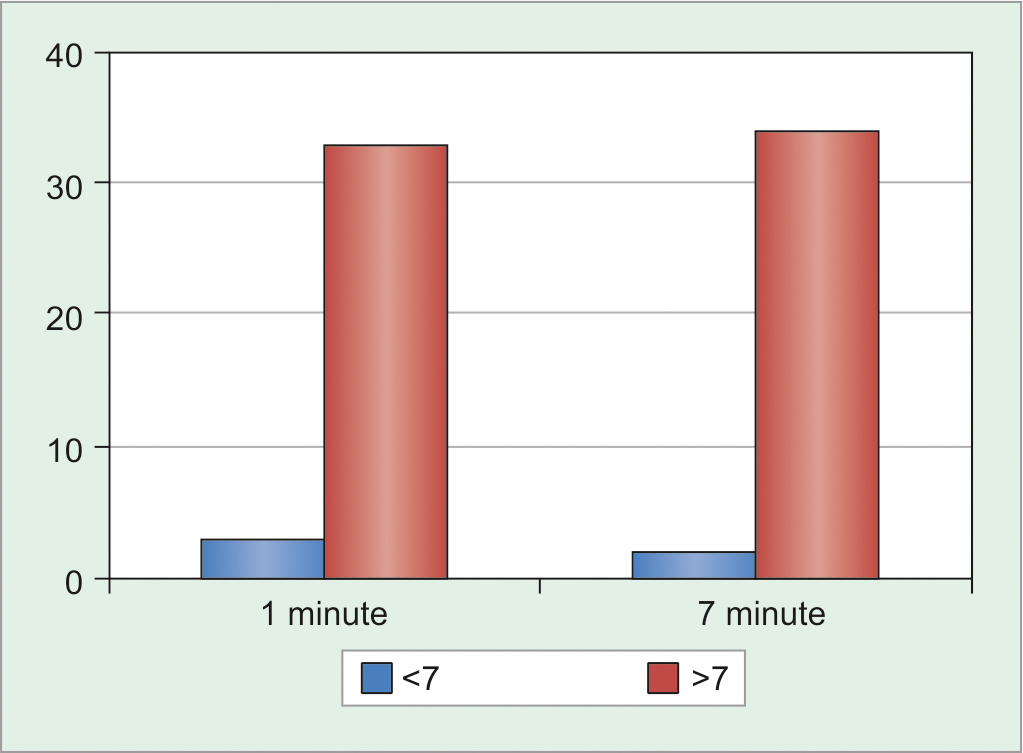 The women were grouped under three broad groups: Rheumatic heart disease, congenital heart disease, and others. All the groups were further subdivided into surgically corrected and uncorrected (Graph 2).

In the present study, the incidence was 0.89%. Sethuraman et al6 observed 0.96% of cardiac diseases in pregnancy. The incidence varies between 0.30 and 3.5%, as shown in various studies like Sugrue et al7 and McFaul et al.8

Majority of women in the present study belonged to the age group of 20 to 24 years (Table 1) and 58.33% of women were multiparous (Table 2), similar to the observations made by Mangala et al4 and Bagde et al (Tables 1 and 2).9

Table 1: Distribution of patients according to age

Table 2: Distribution of patients according to parity

Table 3: Distribution of patients based on NYHA functional classification during present pregnancy

Table 4: Distribution of patients based on type of cardiac disease

Table 5: Distribution of cases according to maternal complications

Table 6: Period of gestation at delivery

Table 8: Distribution of cases according to the fetal outcomes

Table 9: Distribution of babies according to birth weight

On evaluating for NYHA functional class, 66.89% were under NYHA class II followed by NYHA class I (Table 3). This finding is comparable with the results of Indira et al.10

On evaluating the maternal complications, 44.44% had no adverse complications. Similar finding was observed in Stangl et al13 and Avila et al studies.14 The most common complication encountered was anemia (13.88%) followed by sustained tachyarrhythmias/bradycardia and postpartum hemorrhage. One case (02.79%) of maternal death due to peripartum cardiomyopathy was observed. The mortality rate was 2.7% in Avila et al study (Table 5).14 Table 6 shows distribution of cases according to period of gestation at delivery.

Out of the 36 cases, 30 (83.33%) patients delivered during the gestational age of 36 to 40 weeks of pregnancy (Table 6). The patient with complete heart block underwent emergency LSCS at 38 + weeks in view of non-reassuring non stress test. Permanent pacemaker was inserted in the postoperative period. Case of atrial myxoma had an elective LSCS with myxoma excision at 31 weeks, with the indication being severe mitral stenosis with cardiac failure.

In the study group, 41.67% of the women underwent lower segment cesarean section (LSCS), with previous LSCS being the commonest indication. Uneventful normal vaginal delivery cases were of 38.88%. The rate of cesarean section was 52% in Mangala et al study (Table 7).4

The patient with complete heart block underwent emergency LSCS at 38 + weeks in view of nonreassuring nonstress test. Permanent pacemaker was inserted in the postoperative period. Case of atrial myxoma had an elective LSCS with myxoma excision at 31 weeks, with the indication being severe mitral stenosis with cardiac failure.

The fetal/neonatal outcome was good in 88.89%. Commonest complication was intrauterine growth restriction (5.55%). Hemodynamic compromise secondary to valvular stenosis and the resulting decrease in uterine blood flow are the probable explanation for intrauterine growth restriction. One case of intrauterine fetal death noted, which accounts for 2.78% (Table 8). This is comparable to the 2.00% reported in literature.15 Preterm labor and low birth weight are known as major neonatal complications in women with heart disease in pregnancy. During the study period, 72.72% of the babies were born at term and only 27.27% were preterm. A similar observation was made in a South Indian descriptive study.16 Also, 75.00% of babies were between 2.5 and 2.9 kg and only 2.78% of babies were having a birth weight of <2 kg (Table 9). This indicates that the perinatal outcome depends on the severity of symptoms during pregnancy rather than the duration or type of cardiac disease. Appearance, pulse, grimace, activity respiration score at birth was >7 in 91.66% at 1 minute and 94.44% at 5 minutes.

Heart disease in pregnancy is a high-risk comorbidity with a major impact on the mother and the fetus. This study supports the fact that a proper maternal evaluation and an institutional delivery can improve the prognosis in a patient with cardiac disease complicating pregnancy. A multidisciplinary approach is ideal in dealing with and preventing complications. It is mandatory to counsel the patients for contraception and family planning wherever necessary. It is also necessary to follow up these patients during subsequent pregnancies.