Materials and methods: A cross-sectional descriptive study was conducted in the tertiary Medical College and Hospital. A total of 52 COPD patients were included by convenience sampling into the study. The echo study addressed pericardial condition, cardiac dimensions, LV systolic and diastolic function, and hemodynamic of pulmonary circulation. LV dysfunction was outcome variable and IBM SPSS version 22 were used for statistical analysis.

Conclusion: LV defects, specifically E/A ratio was inversely proportional to the severity of the COPD.

Chronic obstructive pulmonary disease (COPD) or chronic obstructive lung disease (COLD) is a pulmonary condition which is characterized by airflow obstruction due to chronic bronchitis or emphysema which is not fully reversible and is usually progressive in nature.1 According to the Global Burden of Disease (GBD), COPD is the third leading cause of death worldwide, something that WHO had not predicted to occur until 2030.2 An estimated 328 million people have COPD worldwide. In 15 years, COPD is expected to become the leading cause of death worldwide.3

Chronic obstructive pulmonary disease leads to secondary pulmonary arterial hypertension (PAH) and right ventricular hypertrophy or “cor pulmonale” and ultimately right heart failure.4 An increase in right ventricular (RV) afterload induces a left ventricular (LV) diastolic dysfunction because of biventricular interdependence as RV and LV are enclosed in a relatively nondistensible pericardium. Hence, changes in right ventricular volume will affect left ventricular volume.5 An increase in RV afterload is common in COPD patients. Secondly, forward failure of the RV, as indicated by a reduced RV ejection fraction will hamper an adequate filling of the LV. Increase in pulmonary arterial pressure results in impairment of RV function and underfilling of the LV, leading to a failing stroke volume response.5

Existent but undocumented LV dysfunction secondary to ischemic heart disease (IHD), is high in COPD patients because they share many risk factors in common such as age, male predominance, cigarette smoking.6 Other factors such as hypoxia, and hyperviscosity of blood secondary to polycythaemia and shifting of interventricular septum toward left side may also contribute to the LV dysfunction.7

A cross-sectional descriptive study was conducted in the department of general medicine and intensive care unit (ICU) at a tertiary medical college and hospital, from June 2011 to May 2012. A total of 52 COPD patients were included by convenience sampling into the study. Both male and female COPD patients diagnosed by physical examination, chest X-ray, pulmonary function tests were included in the study. Ethical committee approval was obtained from the institutional review board and informed consent was taken from all the participants.

A thorough clinical examination including general survey and detailed systemic examination as per proforma were done. Routine measurement of blood pressure (BP), pulse, and respiratory rate were done. Echocardiography, chest X-ray and spirometry are the main of the study.

2D-echocardiography was done by a VIVID 7 model of GE healthcare system with a multifrequency probe with a range of 2-4.3 MHz both 2D and M-mode studies were done. All echo-doppler studies were carried out by the same cardiologist. The echo study addressed pericardial condition, cardiac dimensions, LV systolic and diastolic function, and hemodynamic of pulmonary circulation.

Left ventricular function was also assessed by using the following parameters: EF (ejection fraction) = measure of how much end-diastolic value is ejected from LV with each contraction (56-78%).

FS (fractional shortening) = it is a percentage change in LV dimension with each LV contraction (28-44%).

Left ventricular dysfunction was considered as outcome variables. Stages of COPD, duration of smoking, demographic variables were considered as explanatory variables. Descriptive analysis was carried out by mean and standard deviation for quantitative variables, frequency and proportion for categorical variables. The association between categorical explanatory variables and quantitative outcome was assessed by comparing the mean values. ANOVA was used to assess statistical significance. p- value < 0.05 was considered statistically significant. IBM SPSS version 22 was used for statistical analysis.

A week negative correlation (r = 0.0207) between duration of smoking and E/A ratio was observed as per the scatter plot (Fig. 1). 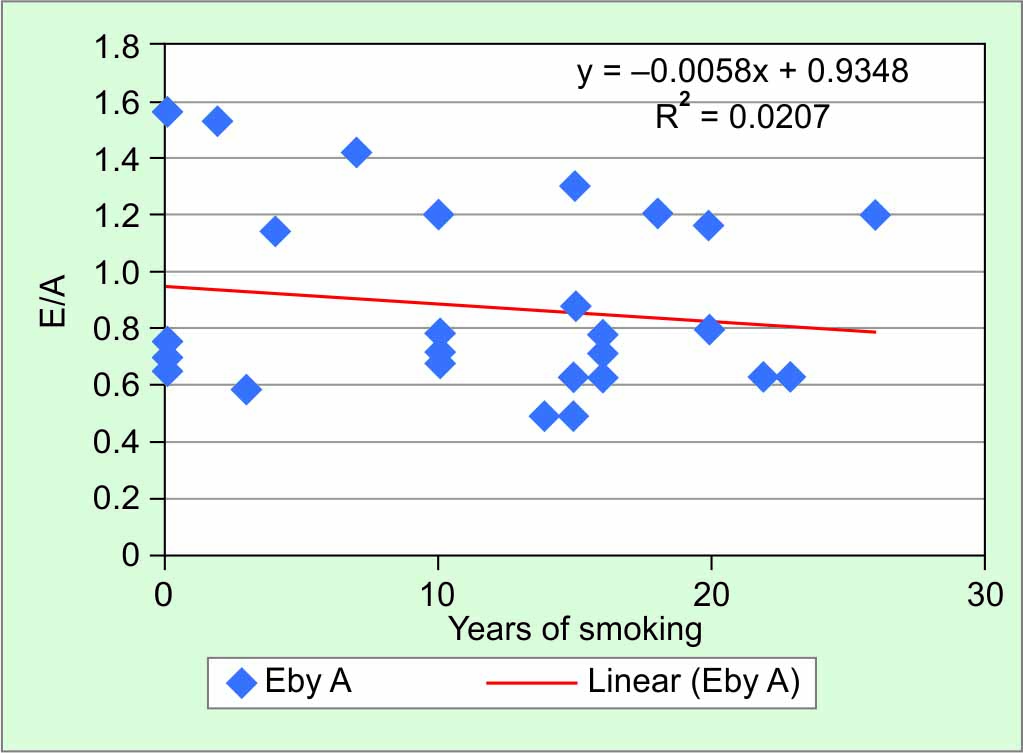 A week negative correlation (r = 0.0458) was observed between duration of smoking and Left ventricular end-diastolic diameter (LVEDD) as per the scatter plot (Fig. 2). 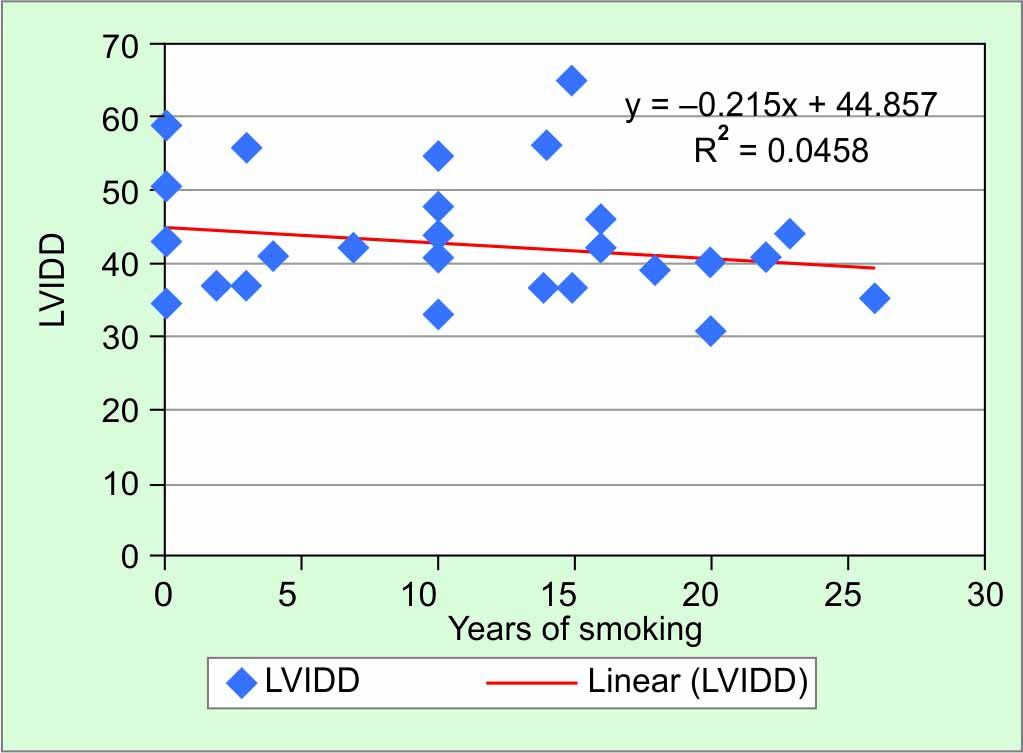 Figure 2: Relationship between LVEDD with years of smoking

In the present study, we assessed the left ventricular function in COPD patients and have found that majority of them had statistically significant decreased E/A ratio in stage 4 COPD (p < 0.05). The interaction between COPD and cardiovascular comorbidity is complex and bidirectional. Several studies have reported cardiac abnormalities in COPD with the right ventricle.

The present study demonstrated a week negative correlation between duration of smoking and E/A ratio. It is supported by the fact that cigarette smoking and other exposure factors lead to inflammatory changes which disrupt the vascular pulmonary endothelium.

There was week negative correlation between duration of smoking and LVEDD. This can be explained as there is a lower preload in left cardiac chambers mediated by an intrathoracic hypovolemia and a decrease of the pulmonary vascular bed caused by dynamic hyperinflation.13 This mechanism may explain not only the reductions in LV diameters and volumes but also the lower stroke volumes and the supposed LV diastolic dysfunction found at the transmitral doppler analysis. Indeed, the inflow pattern is not only an index of ventricular relaxation and compliance, but it is also influenced by others variables such as the preload and the HR.14,15 A lower preload can mimic an impaired LV relaxation in normal functioning heart.16

One of the limitations of our study was a smaller sample size, and the method used to assess the lung function was spirometry, whereas lung volume measurements would have been more accurate. Further well-designed cohort studies and use of future three-dimensional echocardiography with optimal sample size will be helpful in defining the left ventricular dysfunction in COPD patients.

Left ventricular defects specifically differences in E/A ratio were present in patients with all stages of COPD severity. The pathophysiological mechanisms involved can act independently or synergically, given the complex heart-lung interaction. These findings pave the way for future research, and to new diagnostic and therapeutic strategies. Treatment and prevention of smoking can have a great impact on the natural history of coexisting COPD and CVD.

We acknowledge the technical support in data entry, analysis, and manuscript editing by “Evidencian Research Associates.”