Case report: A 36-year-old male patient was referred to our hospital for evaluation of a swelling in the upper neck which gradually progressed over a span of 3 months. It was painless, firm in consistency, and ovoid in shape. The blood and urine investigations were normal. Fine needle aspiration cytology (FNAC) was performed and the findings were correlated with IHC and the mass was confirmed to be a mucoepidermoid carcinoma.

Discussion: Mucoepidermoid carcinomas show variability in their behavior. The prognosis is dependent on the clinical stage, site, grading. Duration before diagnosis ranges from months to years. The cure is possible in low and intermediate grades of tumors. Characteristically, it shows t[11;19][q21;p13] with MET1–MAML2 fusion in other cases it occurred in the parotid gland and palate. This is probably the first case reported to occur in a submandibular gland in a patient in the third decade of his life, with its incidence normally common in the 5th to 6th decade.

Salivary gland tumors represent <5% of head and neck tumors with their annual incidence being <1/100,000 population.1

Most of the salivary gland tumors that arise from major glands gradually increase in size. Loss of tongue functions coupled with facial paralysis indicates malignant involvement of salivary glands.

Most of the major salivary gland tumors are often painless and non-tender.2

The mucoepidermoid carcinoma is <10% of all salivary tumors but accounts for 30% of salivary gland malignancies.5

It is believed to arise from pluripotent cells of the excretory ducts of the gland. It has three different types of cells which include mucous, intermediate, and epidermoid cells. Histopathologically, the tumor is classified into three grades, low, intermediate, and high. The intermediate grade is least common while the low grade is most common.6,7

Fine needle aspiration cytology (FNAC) is an important diagnostic and planning tool along with immunohistochemistry (Figs 1 to 6).

The present report describes a 36-year-old male patient presenting with mucoepidermoid carcinoma in the submandibular gland.

A 36-year-old male patient presented to our outpatient department with a solitary swelling in the left submandibular region, extending along the body of the mandible. It was 5 × 3.5 cm swelling, ovoid in shape with an even surface. He reported pain that was insidious in onset, progressive in nature, and of dull aching type. The pain was non-radiating and not referred. The past medical, dental, social, and family history of the patient was unremarkable. 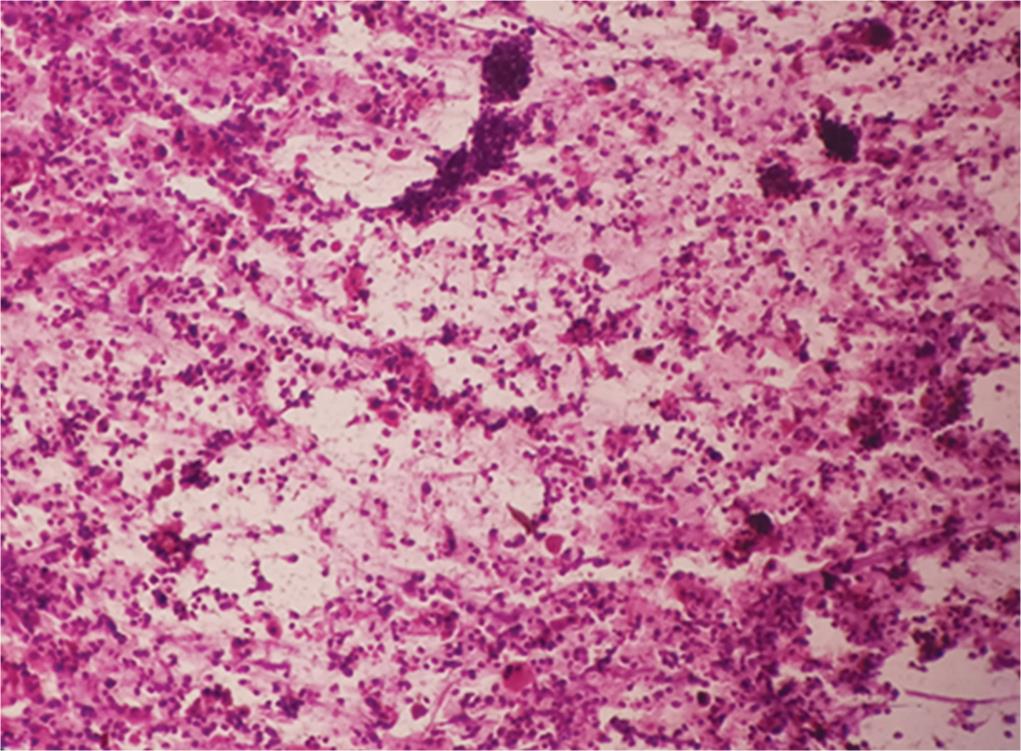 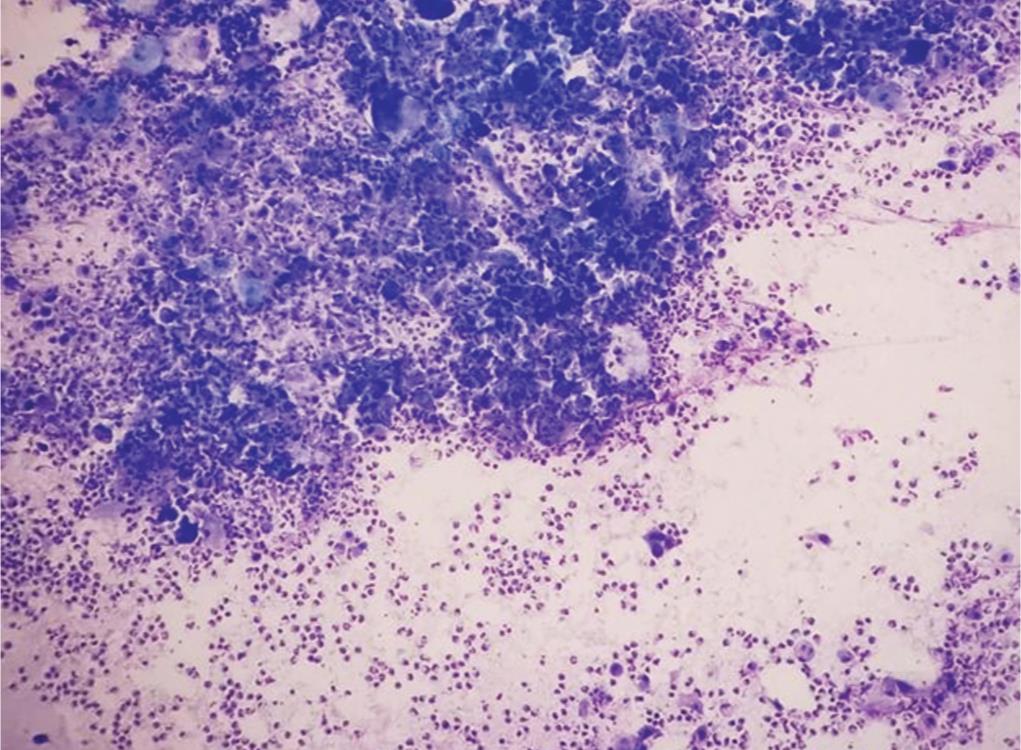 Fig. 2: MGG stain 10× sheets of cells in an inflammatory background. Squamoid cells are seen along with cells having bizarre nuclei 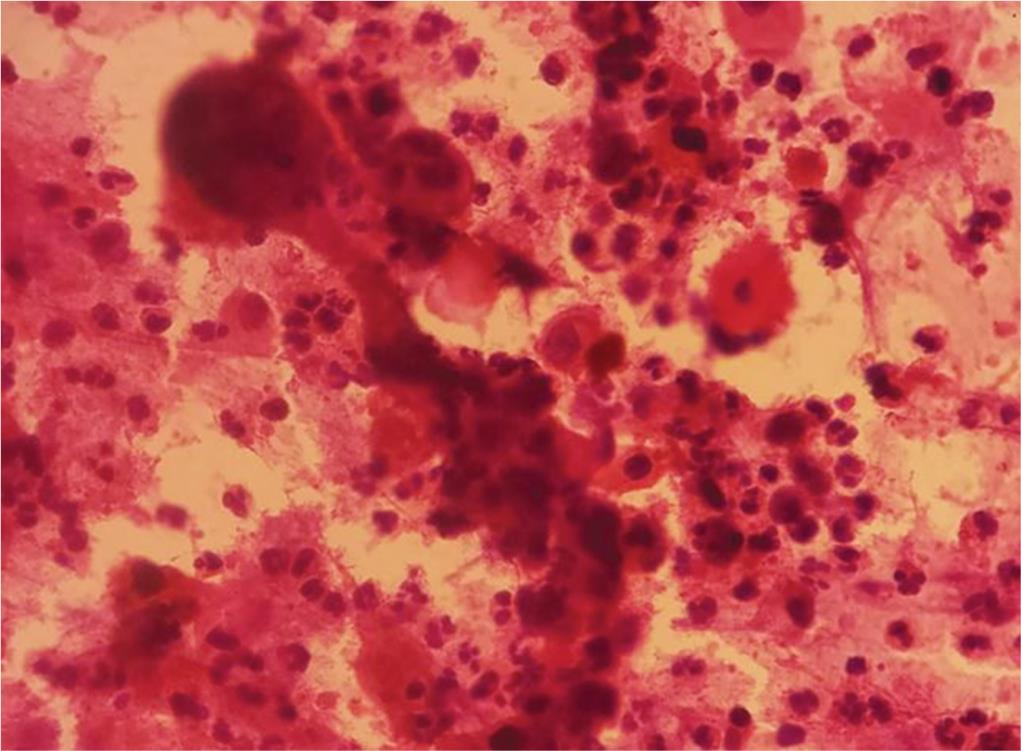 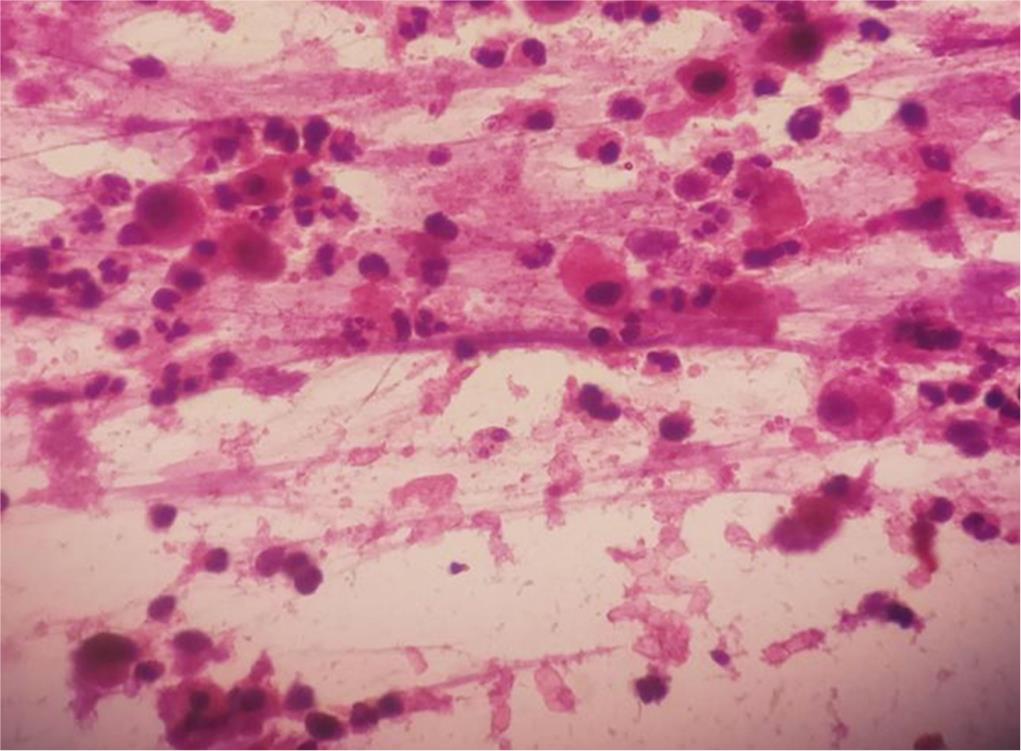 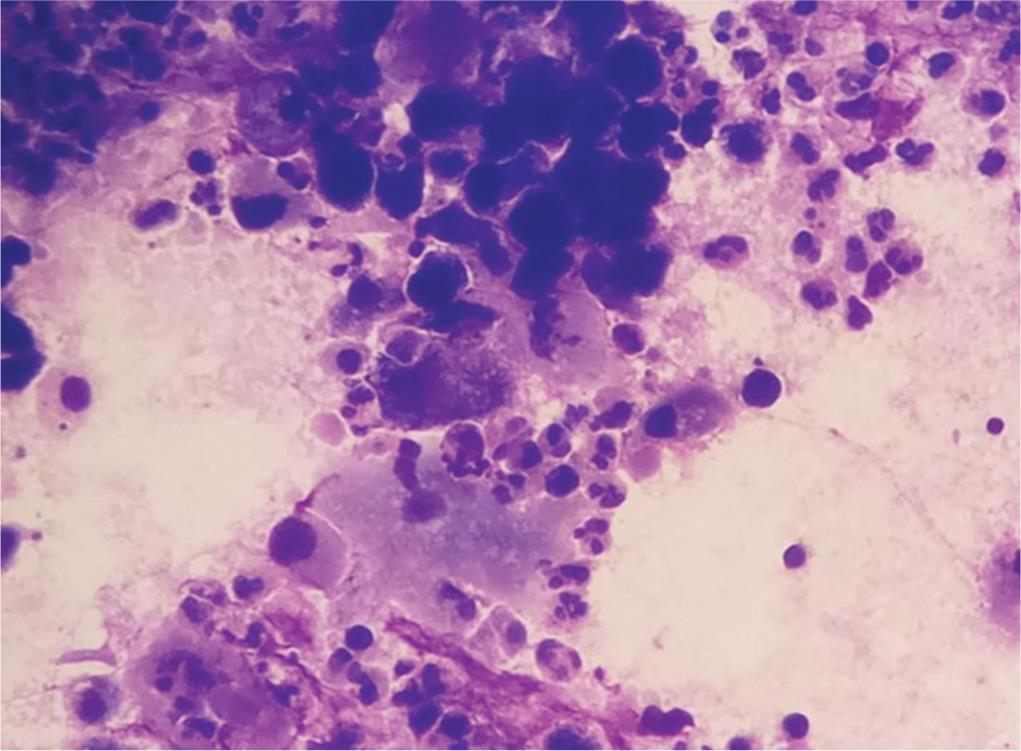 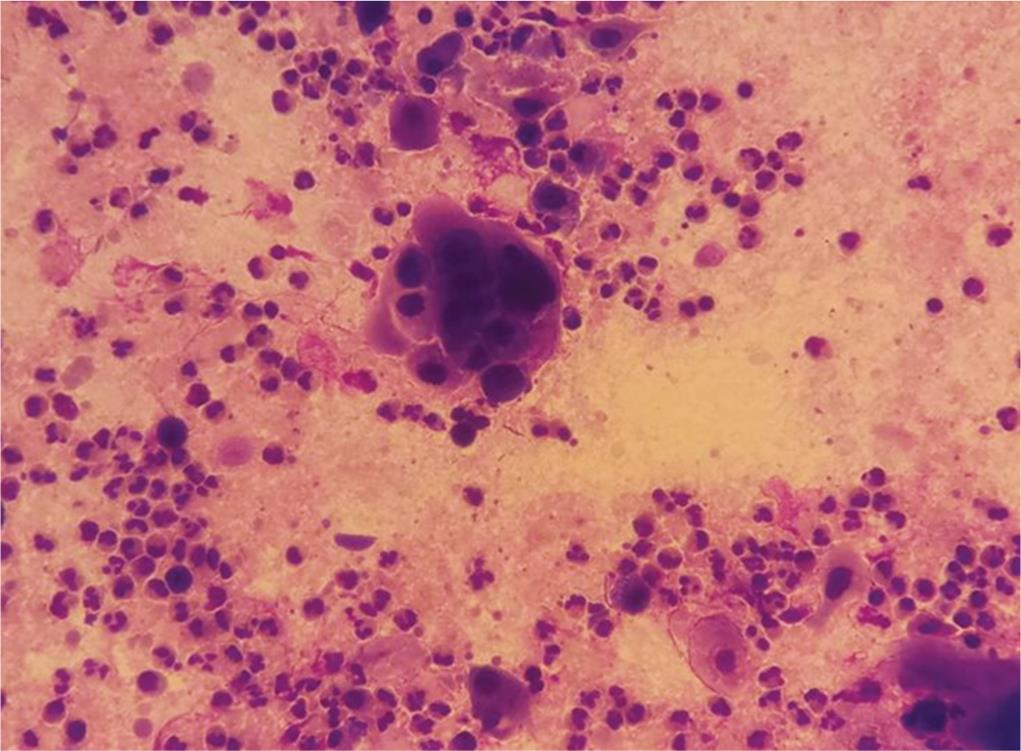 On examination, the swelling was found tender, firm to hard in consistency. It was on mobile, arising from plane deep to muscle.

The hematological evaluation revealed normal values after which an FNAC was performed. Pap and MGG-stained smears showed highly cellular aspirate comprising poorly cohesive cells arranged in sheets. The majority of the cells were of the intermediate type with pleomorphic nuclei. Squamous differentiation was evident. Occasional mucin secreting cells were seen. Mitotic activity was present. The background was necrotic and showed acute inflammatory infiltrate.

To confirm the diagnosis, IHC was performed and biomarkers for mucoepidermoid carcinoma were found to be positive.

MEC is a common malignant tumor of the salivary gland but morphological heterogeneity makes diagnosis difficult.8,9 Not all diagnostic features are found in the fine needle aspiration, especially in the low-grade lesions.10 Hence, the diagnosis of mucoepidermoid carcinoma may be missed and confused with other benign and malignant lesions.11,12

When the epidermoid constituent predominates, the histological appearance of the tumor may closely resemble that of squamous cell carcinoma, and is considered to be a high-grade MEC tumor is considered to be low grade when mucin-secreting cells are predominant with the cystic background. The morphological appearance of MEC shares similarities to metastatic clear cell renal adenocarcinoma and clear cell bronchogenic squamous carcinoma. Hence, appropriate work-up of the patient must also include imaging of the lungs and kidneys.13

Cell proliferation of the MEC serves as one of the most important criteria for measuring its biological behavior and aggressiveness MEC.

Mucoepidermoid carcinoma is very rarely found in the submandibular gland. IHC can help in the diagnosis of salivary gland tumors, by supporting the histological assessment. The confirmatory diagnosis must be made after comparing both the IHC and morphological findings.11 This case report exemplifies the FNAC findings and adds to the existing literature on the same.

The patient was referred to the surgery department for a further course of management.