A Delayed Diagnosis of an Acquired Dyke–Davidoff–Masson Syndrome Variant: A Case Report

Dyke–Davidoff–Masson syndrome (DDMS) is an important cause of intractable and drug-resistant seizures. It has varied clinical presentation and distinct neuroimaging features. Here, we describe a male patient presented with recurrent generalized tonic–clonic seizures, and cognitive deficit and characteristic neuroimaging features of marked sulcal all ventricular prominence seen on left side suggestive of hemiatrophy associated with mild calvarial thickening with pneumatization of sinuses seen on left side with dilatation of left petrous edge which is suggestive of DDMS. Early institution of neuroimaging in patients with intractable epilepsy will make early diagnosis and better outcome.

Dyke–Davidoff–Masson syndrome (DDMS) is an uncommon disease characterized by seizures, hemiparesis, facial asymmetry, and mental retardation with varied psychological manifestation with distinct features on cross-sectional radiological imaging.1 Dyke–Davidoff–Masson syndrome is occasionally seen in clinical practice but one of the important causes of recurrent and refractory seizures. The clinical presentation as well as the radiological features may be variable depending on the age and extent of cerebral insult. We report a case of an acquired form of DDMS in a 17-year-old unmarried boy with a history of recurrent seizures with cognitive decline as well as neuroimaging presentation.

A 17-year-old boy studying in ITI presented with history of generalized tonic–clonic seizures. As per the parents, he was born at hospital as full-term normal vaginal delivery and his developmental milestones were appropriate as per age with no behavioral abnormalities. He had history of head injury at the age of 3 years followed by loss of consciousness lasting for 3–4 hours for which no evaluation was performed. He had first episode of seizure in 2017 lasting for about 1–2 minutes of jerky movements of limbs associated with frothing from mouth, clenching of teeth, up rolling of eyeballs, tongue bite without bladder, and bowel incontinence. Patient complained that his scholastic performance was decreasing from past 4–5 grades. He had difficulty in paying attention and concentration at a particular task. He also complained that he was not socially active as before and there was decreased interaction with the peer group. He was taken to local Postgraduate Institute of Medical Education and Research (PGIMER), Chandigarh, hospital and was investigated. His contrast-enhanced magnetic resonance imaging (CEMRI) was performed, where he was prescribed medications. Again, he had two to three episodes of seizure and for the same he came in 2019 in psychiatry OPD of Maharishi Markandeshwar institute of medical sciences and research (MMIMSR), Mullana, and was advised computed tomography (CT) brain.

On mental status examination, he was tidy and cooperative. No abnormality was detected in his neurological examination. For the same, a detailed neuropsychological assessment was performed using PGI memory scale (PGIMS) to assess cognitive functions. On PGIMS, there was dysfunction in the mental balance, attention, and concentration. Further in the subtest of verbal adult intelligence, there was dysfunction on information, arithmetic, and comprehension. Further, Raven’s progressive matrices for IQ assessment were administered, with IQ being 84 which indicated below average level of intellectual functioning.

In view of this, diagnosis of epilepsy was considered and he was further investigated. The blood investigations were within normal limits. Contrast-enhanced magnetic resonance imaging (CEMRI brain) showed diffuse atrophy in left posttemporal parietal and occipital lobe with ex vacuo dilatation of ipsilateral ventricle and surrounding gliotic changes and Wallerian degeneration. Thinning of distal body region of corpus callosum and gliotic changes in hippocampus and parahippocampal region on left side with atrophy of fornix. After which CT brain was performed that showed as in Figure 1 e/o marked sulcal four ventricular prominence seen on left side suggestive of hemiatrophy associated with mild calvarial thickening with pneumatization of sinuses seen on left side with dilatation of left petrous edge. Electroencephalogram (EEG) findings showed generalized slowing which was suggestive of seizure disorder. So, on the basis of clinical and radiological findings, a diagnosis of DDMS was entertained. The patient was started on T. oxcarbazepine 300 mg once a day in morning (OD) and 600 mg hora somni (HS)/at night. 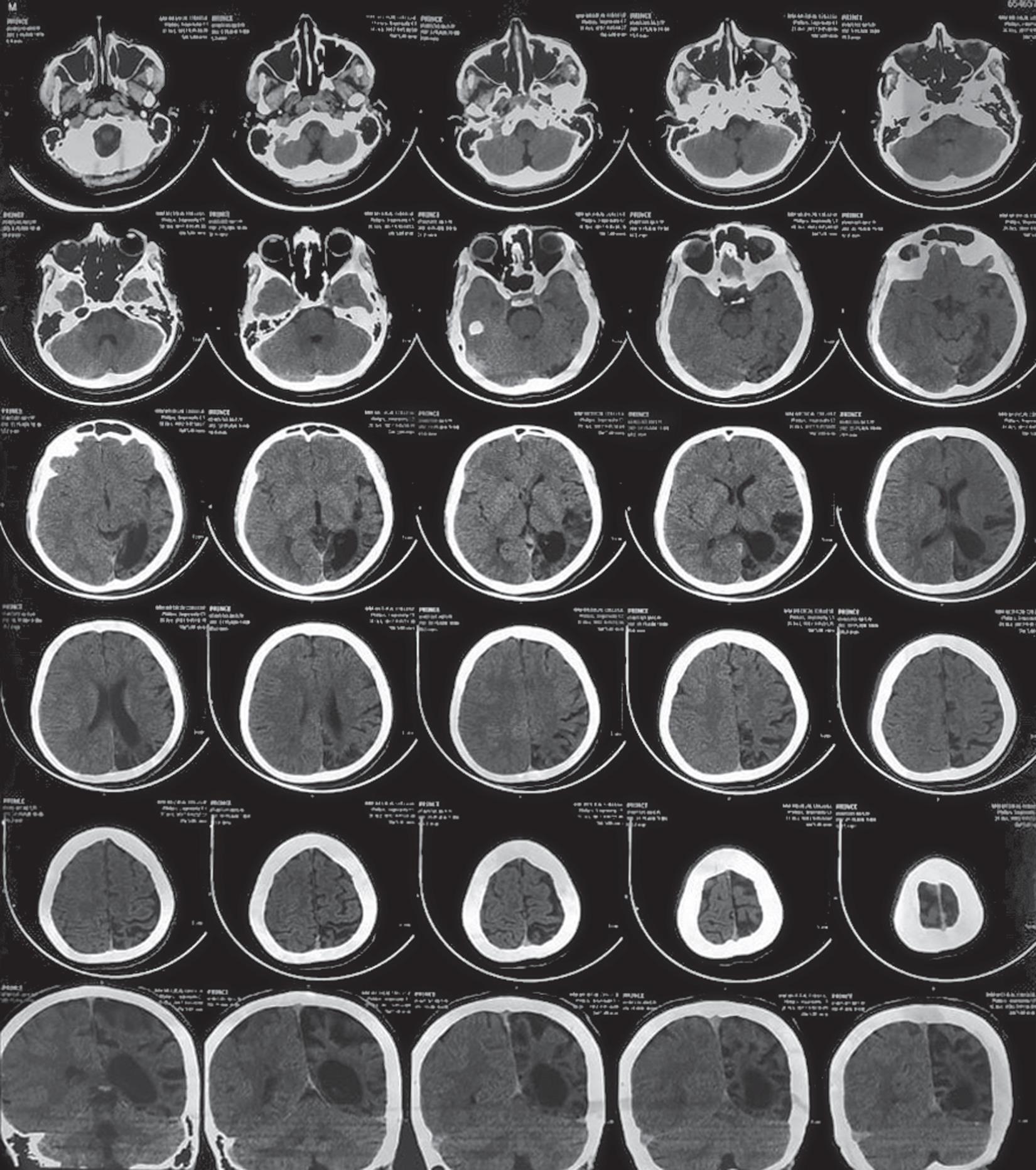 Childhood cerebral hemiatrophy or DDMS is a rarely occurring condition that can be regarded as the end result of a number of different disease processes. It is characterized by marked asymmetry of cerebral hemispheres. The condition may be congenital or acquired. In the congenital or primary form, there are usually no evident etiological factors and symptoms present at birth or shortly after. Cerebral damage is likely due to intrauterine vascular occlusion during the prenatal period. The acquired form or secondary hemiatrophy often results from a cerebrovascular lesion, cranial trauma in early childhood, or inflammatory process.

Sharma et al. also conducted a study that showed DDMS has varied form of clinical presentation depending on the extent of the brain injury starting from facial asymmetry, seizures, unilateral hemiplegia, or hemiparesis to mental retardation along with learning disabilities and rarely, patients can have neuropsychiatric symptoms. In our patient, seizures as well as neurological (structural) changes may have led to decline in cognition.2,3

In acquired DDMS, the proposed etiological factors are trauma, hemorrhage, ischemia, infection, birth asphyxia, prolonged febrile seizures, and tumor. It is mainly due to several ischemic episodes resulting from variable causes, which in turn reduces brain-derived neurotrophic factors production, which finally ends in cerebral atrophy.2,4 In our case, the history of trauma (head injury) is present in childhood.

Unal et al. showed that CT or magnetic resonance imaging is the gold standard for the diagnosis of DDMS. The nature and extent of the underlying pathological processes vary widely. The largest series of DDMS in the literature concluded male sex dominance (73.5%) with left hemisphere involvement (69.2%) among 26 patients with a mean age 11.5 In our case, also male and left hemisphere involvement is there.

Sharma et al. have also reported delayed appearance of mental retardation and early appearance of seizures associated with cerebral atrophy after the onset of hemiparesis.3,6 Acquired causes are usually hemorrhagic or ischemic vascular diseases in the postnatal period. In addition, damage can be caused by trauma, tumors, and infection.7,8

Dyke–Davidoff–Masson syndrome is a rare preventable cause of refractory epilepsy. Adult presentation of DDMS is unusual. A thorough history and imaging can give an early diagnosis and differentiate from other close differentials. Treatment is largely supportive and aims at controlling seizures along with physiotherapy, occupational therapy, and speech therapy.

In conclusion, the present case illustrates the classical clinical and neuroimaging findings of DDMS and brings the attention of clinicians to this uncommon syndrome.