Background: Uterine fibroids are histologically benign tumors that originate from smooth muscle cells and usually seen in the genitourinary tract such as in the vulva, ovaries, urethra, and urinary bladder but may arise in nearly any anatomic site. Leiomyomas that become adherent to surrounding structures (e.g., the broad ligament, omentum, or retroperitoneal connective tissue) develop an auxiliary blood supply and lose their original attachment to the uterus, thus becoming “parasitic.” These lesions may manifest as extrauterine pelvic masses that compress the urethra, bladder neck, or ureter and may produce symptoms of varying degrees of urinary outflow obstruction or secondary hydroureteronephrosis. We herewith report the relationship of power morcellation and the development of parasitic fibroids in two patients after laparoscopic hysterectomy.

Case description: Case 1: A 30-year-old patient presented to the hospital with an abdominal mass that was progressively increasing over a 2-year period. The histology of the mass showed interlacing bundles of benign smooth muscle fibers consistent with a leiomyoma. Surgical excision of the mass was done. Case 2: A patient of 41 years nulligravida presented to the hospital with complaints of pain in the abdomen, continuous dull aching type of pain that relieved on medication for 2 months, and a palpable mass per abdomen since 1 month. Ultrasound findings showed a large mass in pelvis posterior to uterus, likely indicating parametrial fibroid or ovarian fibroid. Total laparoscopic hysterectomy with open myomectomy treatment was done for the patient.

Conclusion: Parasitic leiomyomas are caused following laparoscopic myomectomy or hysterectomy. Given the potential sequelae of retained fragments, careful attention to remove all residual specimens is warranted, and morcellation should be done in a containment bag.

Uterine fibroid is the most frequently seen benign gynecological tumor of the female genital tract. Although it has a relatively high prevalence rate of around 40% in women aged 40 years and older, the majority of the patients with uterine fibroids are asymptomatic. Many different treatment modalities have been used for symptomatic patients, ranging from medical to surgical interventions. Surgical management may be performed through laparotomy or minimally invasive surgery, among others.

The advent of power morcellators has made it easy for large leiomyomas to be removed laparoscopically with less blood loss, shorter hospital stay, and faster recovery time. There are many methods for tissue retrieval, such as through a mini-laparotomy incision or through a colpotomy, and they are becoming less popular. But we need to keep in mind that the fragmentation of the fibroids using the morcellator may also lead to peritoneal seeding, which, if not detected early at the time of the operation, may grow to form parasitic leiomyomas (Figs 1 and 2).

Uterine fibroid growth is dependent on the sex steroid hormones, estrogen, and progesterone. Studies from in vitro and animal models over decades suggest that estradiol (E2) plays a central role in myoma growth via its receptor, estrogen receptor α (ERα). Most medical treatments such as the gonadotrophin-releasing hormone agonist (GnRHa), aromatase inhibitors (AIs), selective estrogen receptor modulators (SERMs), progestins, and selective progesterone receptor modulators (SPRMs) reduce menstrual bleeding in patients with myoma. It is theorized that exposure to estrogen and progesterone could be a risk factor for the development of parasitic myomas as only GnRHa, AI, and SPRMs treatment options can reduce both myoma volume and menstrual bleeding.

A patient of aged 30, para 1 living 1, presented with an abdominal mass that was progressively increasing over a 2-year period. The mass although not painful was spread across all four quadrants and predominantly more on the left side of the abdomen. On palpating, the mass was firm, nontender, and mobile in transverse direction. Three years earlier, she had undergone laparoscopic myomectomy for a cervical fibroid. An 8 × 8 cm fibroid was removed with power morcellator. One year back, she underwent LSCS which was uneventful. The patient also complained of persistent menorrhagia and dysmenorrhea since the previous surgery and was under medication for the same. These included tranexamic acid and mefenamic acid with the onset of menses, which provided good symptom relief. There was no symptoms of anemia, such as fatigability, palpitations, or dyspnea, and the patient was not on any hematinic.

Figs 1A and B: Parasitic fibroid after surgical removal 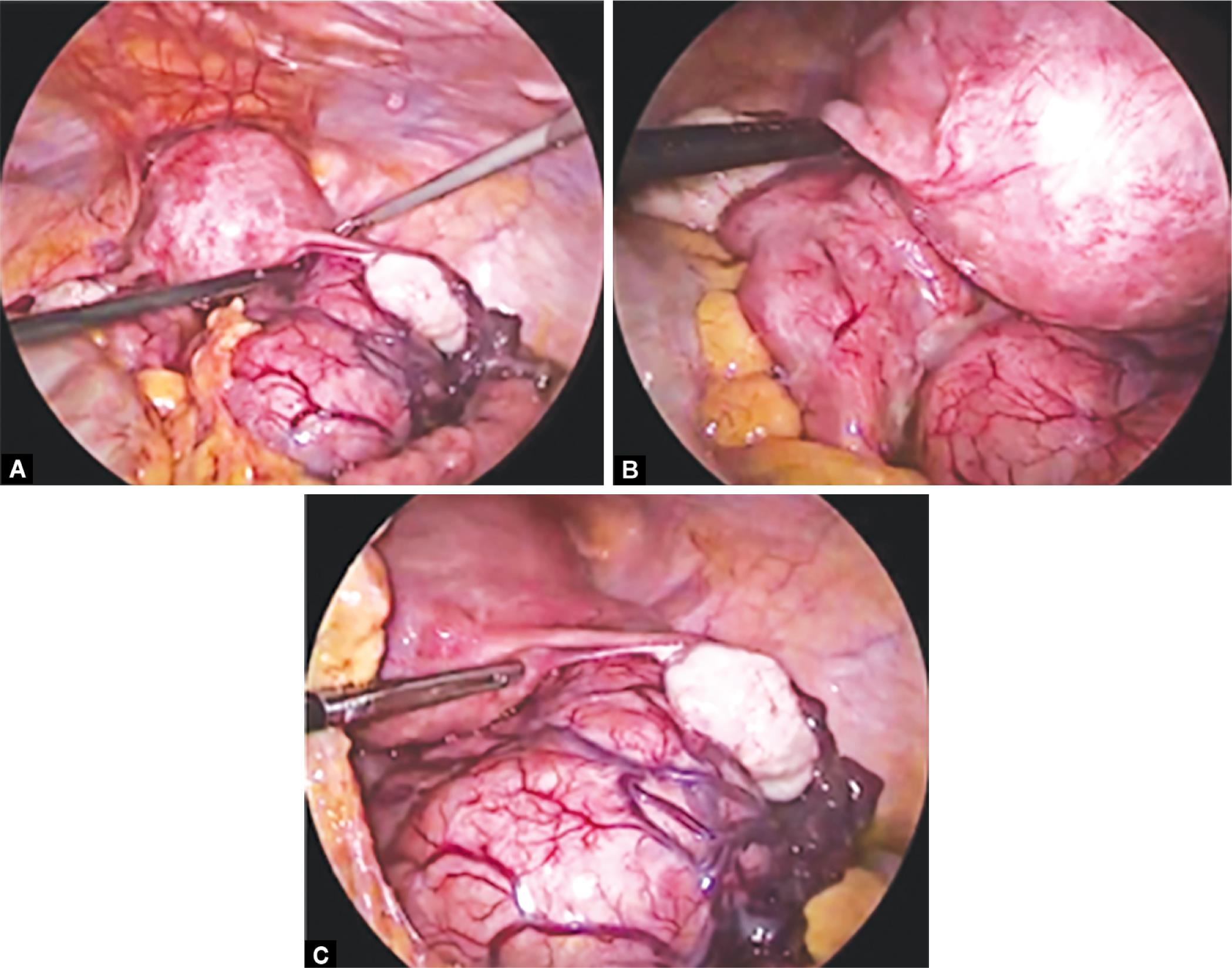 Figs 2A to C: Laparoscopic images of parasitic fibroid

Her papanicolaou smears for cervical cancer screening were up to date with normal cytology. She had no urinary symptoms such as frequency of micturition, dysuria, or incomplete voiding nor bowel symptoms such as constipation. On palpatory examination, it revealed an anterior abdominal wall mass in the left iliac fossa and which was overlying the previous left laparoscopy port (the site used for morcellation during the previous laparoscopic myomectomy). She had a normal sized uterus.

Ultrasound examination of the pelvis revealed a large mass in the peritoneal cavity extending from the epigastric region to pelvis that was separate from the uterus. It approximately measured 22.5 cm in superoinferior extent, 20 cm in the transverse extent, and 7.8 cm in the anterior–poterior thickness. It was predominantly hypoechoic and showed mild vascularity on Doppler. It was partly compressible on probe pressure. There were no cystic areas or calcifications. A similar second lesion was seen in the right upper quadrant measuring 12.2 × 8.2 × 5.2 cm. This was located below the liver. A similar lesion was seen between the upper pole of right kidney and inferior surface of liver. It measured 7.7 × 2.0 × 3.4 cm with minimal free fluid in the peritoneal cavity.

Hemogram examination revealed a hemoglobin level of 11.8 g/dL, white blood cell count of 4.2 × 109/L, and platelet count of 261,000 × 109/L. Management options were discussed, and the patient opted to have an excision of the parasitic fibroids. A 4-kg parasitic fibroid along with three smaller fibroids was removed which was attached to the subcutaneous tissue with no visceral or major vascular attachments. The histology of the mass showed interlacing bundles of benign smooth muscle fibers consistent with a leiomyoma. The patient’s postoperative recovery was uneventful, and her review 6 months following the surgery was unremarkable.

A patient aged 41 years and nulligravida presented with complaints of abdomen pain, continuous dull aching type of pain that was relieved on medication for 2 months duration, and a palpable mass per abdomen since 1 month. Patient gave history of regular menstrual cycles. She was having hypertension and was on medication for the same and gave history of having previously undergone laparoscopic myomectomy in 2013 for fundal fibroid 10 × 12 cm which was removed by electromechanical morcellation.

On examination per abdomen, her uterus size was 14 to 16 weeks size, and on per speculum examination, the cervix was not visualized. On bimanual examination the cervix was pulled up. On palpation, a large mass was felt in the posterior fornix entering into the abdomen. Mobility was not elicited.

Ultrasound findings showed a large mass in pelvis posterior to uterus likely indicating parametrial fibroid or ovarian fibroid. On further investigation, it was concluded to be an enlarged uterus with intramural fibroid.

Findings of MRI depicted a large heterogeneous lesion measuring about 20 cm seen in lower abdomen and pelvis extending posterior to the uterus and in the pouch of Douglas suggestive of pedunculated uterine myoma.

Laparoscopic findings showed uterus of 16 weeks size. Bilateral tubes and ovaries were normal. The mass was a 10 × 10-cm fibroid in postoperative day extending into the rectovaginal septum. There was a 3 × 8-cm fibroid from uterus adherent sigmoid colon and two fibroids of 0.5 × 0.5 cm on the anterior abdominal wall. Also, multiple fibroids were found adherent to peritoneum with largest one being 3 × 3 cm. Management options were discussed, and total laparoscopic hysterectomy with open myomectomy was done.

Of the various treatment options present, laparoscopic myomectomy and hysterectomy are increasingly becoming more available.1 Power morcellators are used to aid in tissue removal of large tissues such as the uterus and the leiomyomas.1 During the procedure, there are chances that some of the resultant small fragments may accidentally remain in the abdominal cavity and become implanted with development of blood supply, resulting in subsequent growth.1–4 These parasitic leiomyomas may then form a rare sequela of laparoscopic myomectomy.5,6

It clinically presents as quite nonspecific and depends on the site for recurrence, such as the pelvic cavity/wall, small intestines, rectum, cecum, vaginal/cervical stump, and laparoscopic port site.2,5,7 Most patients are usually asymptomatic with an incidental finding of the parasitic myoma during other investigations or procedures. The most common symptoms include abdominal/pelvic pain, abdominal mass or pressure, abdominal distention, and vaginal bleeding.5,8

A benign smooth muscle tumor that is distant from the uterus in a patient with a history of laparoscopic myomectomy with morcellation usually raises the suspicion of a parasitic leiomyoma.5 The exposure of these tumors to steroid hormones and growth factors plays an important role in their growth.9 This can also be one deciding factor to differentiate this benign condition from other malignant abdominal conditions. The initial investigation should always include a pelvic ultrasound.1 To differentiate benign leiomyomas from other solid pelvic and abdominal tumors, MRI come in handy.5 The nondegenerated myomas are typically hypointense on T2-weighted images and isointense on T1-weighted images. The difficulty in differentiating the benign leiomyoma from the malignant leiomyosarcoma emphasizes the need for a thorough clinical history and histological diagnosis.

In a case reported, it was seen that uterine leiomyoma particle was growing in an abdominal wall incision after laparoscopic retrieval, suggesting unintentional implantation at the site of removal through the trocar sleeve.10 In a study by Hutchins and Reinoehl, they reported a retained myoma after laparoscopic supracervical hysterectomy with morcellation which was an infarcted myoma 5 × 4 cm and was retrieved by exploratory laparotomy.11

To prevent the potential sequelae of retained fragments, all residual specimens need to be removed. Also, the patient needs to be placed in reverse Trendelenburg position after morcellation and copious irrigation of the abdomen, and pelvis may be helpful in washing small pieces.13 A thorough evaluation of the abdomen and pelvis should be performed to remove any tissue remaining.3,8,14 The morcellation can be performed in a containment bag that reduces the spread of the morcellated fragments. Whenever malignancy is suspected, morcellation should be avoided and large specimens can be retrieved from the abdominal cavity by bisecting or by cutting them into small portions that can later be removed colpotomy or minilaparotomy.1

A rare late complication of power morcellation is parasitic leiomyomas that are caused following laparoscopic myomectomy or hysterectomy. Commonly seen symptoms are abdominal/pelvic mass that may require surgical excision. During power morcellation, care should be taken to prevent excessive fragmentation of the tissues, which may then become implanted and lead to formation of parasitic myomas. Morcellation should be done in a containment bag.

The cases shown here reiterate the need for removal of all fragments, however minute they are, after morcellation. Knowledge of the potential complication in retained morcellated fragments of myomatous uterus and the associated imaging findings, as well as the clinical history, is essential for the proper diagnosis of such lesions.