Pediatric brain is anatomically different from adult brain, and so are the pathophysiology and management of the pediatric head injuries. The physiologically immature brain of a child is more prone to cerebral edema and diffuses axonal injuries. The common delayed complications are formation of leptomeningeal cysts and postconcussion syndrome.1 It is very rare to have posterior reversible encephalopathy syndrome (PRES) as a complication of traumatic brain injury (TBI) in children. Therefore, it was a diagnostic dilemma for us when bilateral occipital, frontal, and parietal hyperintensities on T2-weighted MRI (magnetic resonance imaging) images complicated the recovery of a child after TBI. We shall discuss the salient aspects of management and the role of MRI in pediatric TBI. The cause of PRES and differential diagnosis will also be explored.

Key messages: Diagnosis of PRES in children with no known comorbidity requires a high degree of suspicion for early recognition with the use of MRI brain.

Posterior reversible encephalopathy syndrome (PRES) is more commonly described in adult population, especially during hypertensive emergencies. The causes such as the use of immunosuppressive drugs, e.g., cyclosporine, tacrolimus, patients suffering with SLE, hemolytic uremic syndrome, and thrombocytopenic thrombotic purpura and post-bone marrow or stem cell transplantation also predispose an adult patient to development of PRES.2 Children suffering from renal disease or on chemotherapy are at an equal risk. PRES following head injury has been reported only once in the literature after brain surgery.3

A 7-year-old boy with an alleged history of fall from 10 feet height was brought by paramedics to ED within one hour of the accident. The child was positioned supine on board with cervical collar placed. RL was ongoing at maintenance rate through a 22 G IV cannula placed on the dorsum of the right hand. The child had two episodes of vomiting and one episode of generalized tonic clonic seizures. The child’s ABCs were immediately assessed. He was barely opening eyes to trapezius squeeze and was making incomprehensible sounds. He was extending all four limbs on painful stimulation.

The monitor showed a pulse rate of 110 beats per minute and BP of 100/60 mm Hg. The child was intubated using the rapid sequence intubation (RSI) protocol with a 5.5 mm size cuffed endotracheal tube and connected to ventilator with the settings of SIMV 16, PEEP 3, and FiO2 1.0. Post intubation, vitals were stable. CRT was less than 3 seconds. Capillary blood sugar was 112 mg/dL. He was not febrile and pupils were normal in size and reaction. Secondary survey was completed as ABCs were stabilized. There were abrasions on forehead that were not bleeding. There was no abnormal facial bone movement, and extremities were not deformed. We got an arterial blood gas, focused assessment sonography in trauma (FAST), and pelvic X-rays ordered along with a noncontrast CT scan of the brain. The child was loaded with 0.5 g of levetiracetam and continued on maintenance fluid orders. Before sending to radiology room, he was catheterized and a nasogastric tube was placed. The CT scan (Fig. 1) showed a diffuse cerebral edema with nearly obliterated ventricles and fractures of left greater wing of sphenoid and squamous part of temporal bone with no contusions of brain parenchyma.

The neurosurgeons had evaluated the child. He was started on ampicillin 250 mg and 20% mannitol 10 g intravenously (IV) twice daily. A nonoperative approach to decrease cerebral edema with drugs and early weaning from ventilator was adopted. Blood gases two times a day with hemogram, coagulation profile, and liver and renal function tests were taken. The first set of results obtained four hours later was normal. The blood gases on same ventilator settings were normal except for a PaCO2 of 30–33 mm Hg. On the next day morning rounds, the child was opening eyes to verbal commands and he was localizing pain. A repeat CT scan was planned and weaning trials were documented in the case sheet. Neurosurgeons added cerebrolysin; other than this, the same treatment was continued.

The evening blood gas was suggestive of hypercapnia with PaCO2 of 44 mm Hg. He had received two spontaneous breathing trials since morning, each with a pressure support of 7 mm Hg. The ER doctor on rotation duty in ER ICU considered exchanging the ET tube over airway bougie to rule out tube block. The drug used was midazolam 2 mg IV only. Post-procedure, vitals recorded were 170/110 mm Hg and a heart rate of 126 beats per minute. There was no drop in oxygen saturation. The GCS had dropped to E1M2VNT which remained the same even after 8 hours without the use of additional sedation. The chest radiograph was not showing any infiltrates, and the serum creatinine, urea, electrolytes, and glucose were not suggestive of uremic, metabolic, or hypoglycemic encephalopathy. The pediatric neurologist advised for MRI and we were not sure if they suspected meningitis in the absence of fractures of cranial vault. The MRI (Fig. 2) showed multiple hyper-intense areas in bilateral cerebellar hemispheres and subcortical white matter of bilateral frontal, parietal, and occipital lobes. Fluid attenuated inverse resolution (FLAIR) images showed diffusion restriction. The radiologist opinion was PRES, but as it is the most uncommon occurrence after traumatic brain injury (TBI) in this age group, we kept on looking for other differential diagnosis and causes for PRES. 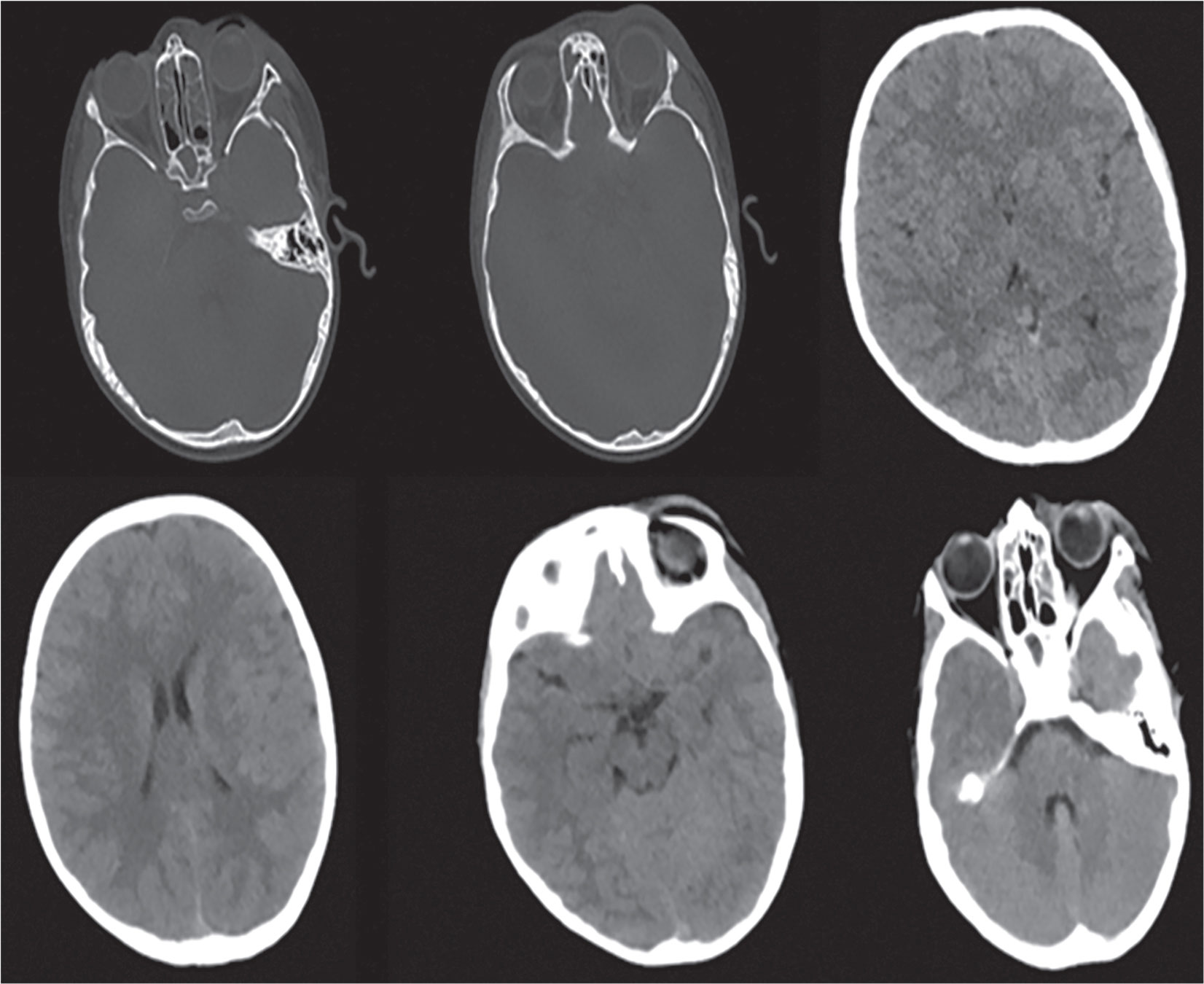 The child was shifted under the care of the neurologist and we followed up the case. He was weaned off ventilator over the next fifteen days. He was tracheostomized as protracted course was expected initially. He gradually improved in GCS and was discharged home with a Glasgow Outcome Score (GOS) of 5.

Posterior reversible encephalopathy syndrome (PRES), first described by Hinchey et al. in 1996, is a clinical condition presenting with neurological symptoms including headache, seizures, altered sensorium, and loss of vision and accompanied by characteristic MRI findings affecting the occipital and parietal lobes which are potentially reversible.4 Amongst the list of predisposing factors to the development of PRES, our child had no comorbidities. However, an underdeveloped autoregulatory capacity of a child’s brain which can be easily exceeded under certain conditions, resulting in a region of vasodilatation and vasoconstriction, especially in the arterial boundary zone cannot be denied. This causes breakdown of the blood–brain barrier with subsequent transudation of fluid along with hemorrhage. The preferential involvement of the posterior circulation has been postulated as being due to the sympathetic innervation protecting the brain from a sudden increase in blood pressure being relatively less in the arterioles supplied by the vertebra-basilar system than in the anterior circulation.5 Similar clinical presentations can also be seen with posterior circulation ischemia-infarction, vasculitis, status epilepticus, hypoglycemia, cerebral venous thrombosis, and reversible cerebral vasoconstriction syndrome. Absence of supporting symptoms and signs ruled out the above. PRES resulting from a major hypertensive response to laryngoscopy was our strongest guess. It is a well-known fact that laryngoscopy and intubation, especially under emergency conditions with least support of pharmacological agents, result in a remarkable sympathetic stimulation.6 The recorded blood pressures in our patient were, though, not abnormally high. As much as 15–20% of patients with PRES are normotensive or hypotensive. Even among the hypertensive, <50% were above the limits of a cerebral flow autoregulation of <140–150 mm Hg.7 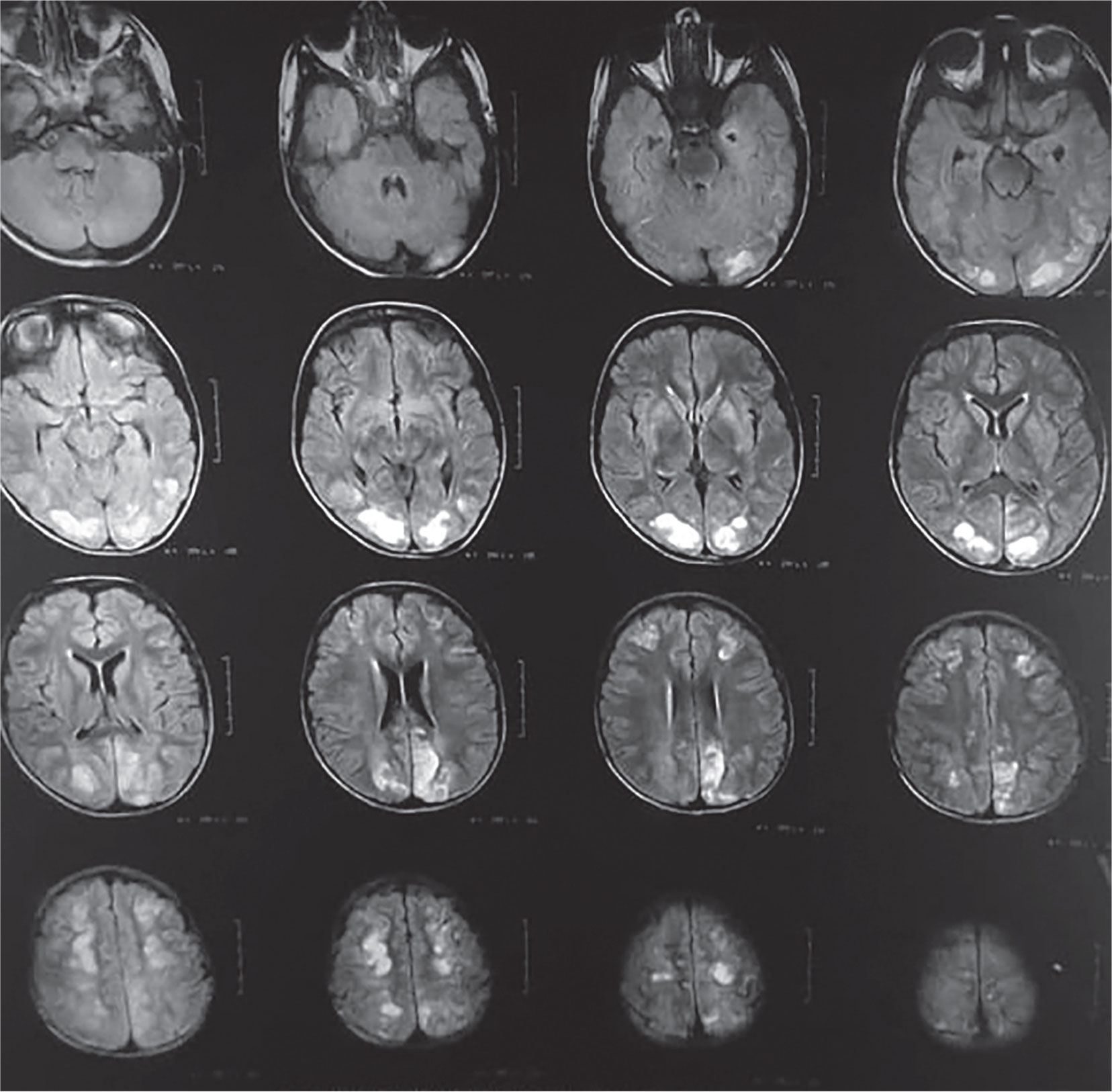 Another possible explanation is the cytokine storm or Brain on fire seen in first 24 hours of pediatric TBI.8 Excessive circulating cytokines contribute to the injury of the microvascular endothelium which in turn increases vascular permeability. Hydrostatic leakage and extravasation or transudation of fluid and macromolecules through damaged arteriolar walls into the adjacent brain interstitium can result in vasogenic edema.

Cerebrolysin has neurotropic activity, which is useful in children with autism, cerebral palsy, and TBI. However, cardiorespiratory side effects of cerebrolysin could also result in neurological injury. The drug can rarely cause hypertension after a fast infusion as documented in the literature.9 More disturbing can be the catatonia following cerebrolysin administration which can cause respiratory embarrassment, and a significant sympathetic response can follow. In either of the situations, a sudden increase in blood pressure leading to vasospasm and failure of autoregulatory mechanism can predispose to PRES.

There are three radiological presentations of this condition: (1) a holohemispheric watershed pattern with a linear involvement of the frontal, parietal, and occipital lobes predominantly, along a watershed distribution, (2) a superior frontal sulcus pattern with predominant involvement of the frontal lobes, and (3) a dominant parietal–occipital pattern in which the typical predominance of the posterior lobes was maintained. Brainstem, cerebellum, basal ganglia, thalami, internal capsule, and splenium of corpus callosum are the atypical sites of involvement. DWI and apparent diffusion coefficient (ADC) have been found to be helpful in differentiating atypical presentations of PRES from conditions such as central pontine/extrapontine myelinolysis, nonhemorrhagic infarcts, and hypoglycemic or hypoxic encephalopathy. Due to vasogenic edema in PRES, ADC shows increased values with a slightly increased signal intensity on DWI, whereas the other conditions show reduced ADC values due to cytotoxic edema.10 Our patient demonstrated increased intensity on diffusion weighted image (DWI) with increased ADC values in the parietal and occipital lobes.

The recently concluded ADAPT TRIAL provides insufficient evidence to recommend the routine use of MRI in pediatric TBI, but in complex situations, it proves helpful in making the diagnosis.11

The symptoms and lesions of PRES may resolve completely if the diagnosis and treatment are prompt, as was seen in our patient; however, failure to diagnose may lead to irreversible infarction and death, most often as a result of acute hemorrhage or massive posterior fossa edema causing obstructive hydrocephalus or brainstem compression. Recurrence of PRES is rare and may be associated with infections especially mycoplasma pneumoniae12 and rapid rise in blood pressure.

In the absence of documented predisposing conditions, we suggest that PRES should be kept in mind as a possibility in children presenting with encephalopathy and seizures in the setting of pediatric severe brain injury. In complex situations, MRI is important to establish such uncommon diagnoses.

We acknowledge the help from Dr Vamsi Krishna, neurosurgeon and his team.