A Review on Cell Cycle Checkpoints in Relation to Cancer

Genomic integrity is required to maintain long life and prevent diseases associated with genomic instability such as “cancer.” The cell cycle is a compilation of well-organized, sequential molecular events, that lead to succession of DNA replication and segregation of replicated chromosomes. Cell cycle checkpoints are the strict regulatory mechanisms that monitor the order, integrity, and fidelity of the main events of the cell cycle. These include growth up to the acceptable cell size, replication, and integrity of the chromosomes, and their accurate segregation in due course of mitosis. Many of these mechanisms are highly conserved, while other studies on higher organisms have shown to control alternative cell fates with a significant impact on tumor suppression. Here, we take into consideration these different checkpoint pathways in a cell cycle and the consequences of their dysfunction on the fate of a cell.

A recent in-depth view of cell cycle regulation and cancer has provided novel samples of research at the “Frontiers of Science.” However, the number of foremost revealing information about both the topics has been derived from the intersection of these two fields.1–5 This review intends to introduce the basics of the cell cycle and its regulation at different checkpoints in relation to cancer. Cancer is broadly a result of unchecked cell multiplication due to abnormal activity of varied cell cycle proteins; therefore, cell cycle regulators are considered attractive targets in cancer therapy. Many cancers are uniquely linked with these proteins and are therefore selectively sensitive to their inhibition.6 After a long run of research on the physiological functions of cell cycle proteins and their relevance for cancer, these data recently got converted into the first approved cancer therapeutics, targeting the regulator of cell cycle.7 Here, we are reviewing the role of cell cycle proteins in cancer, only on those proteins that directly regulate cell cycle progression along with cyclin-dependent kinases (CDKs) and their transcriptional regulatory mechanisms.

“Cell cycle” is a highly integrated process that regulates the timing and frequency of deoxyribonucleic acid (DNA) duplication and cell division. As a biological concept, the cycle of events that a cell undergoes from one division to subsequent is called “the cell cycle.” The contents of the cell must be accurately replicated during this period. In other words, the cyclic path of cellular events is known as “the cell cycle.”

The G1 phase/pre-synthetic phase begins immediately after the mitotic division, where new organelles are formed along with proteins and ribonucleic acid (RNA) synthesis. By the end of the G1 phase, the cell attains double the size. This is followed by the S phase/synthetic phase in which, a duplicate copy of every chromosome is formed by doubling the amount of DNA in the cell, along with the synthesis of RNA and proteins. In the G2 phase/pre-mitotic phase, the cell gets prepared to start mitosis, where DNA synthesis stops, but the synthesis of RNA and protein continues. Finally, in the M phase/mitosis, the cell undergoes nuclear as well as cellular division, resulting in two daughter cells containing the same amount of genetic material as that of the parent cell.9,10

The mitosis/M-phase consists of four phases. The first phase is prophase, where 46 replicated chromosomes condense with two sister chromatids each, along with the formation of spindle fibers and rupture of the nuclear membrane. It is followed by metaphase where chromosomes with attached spindle fibers, move towards the middle (i.e., metaphase plate) of the cell. Then anaphase comes into play, where centromeres divide to convert each sister chromatid along with chromosomal migration to the two opposite ends of the cell. Finally, the telophase brings the end of mitosis, where chromosomes unwind, spindle fibers break down with reformation of the nuclear membrane as well. It is followed by cytokinesis, where cell membrane contracts, ultimately resulting in two daughter cells with 46 chromosomes each.9,10

Internal and external signals: either stimulate or inhibit a metabolic event. Internal signals, such as a small cell with inadequate availability of nutrients, incomplete DNA synthesis, and incomplete attachment of kinetochore, all these factors may act as “stop signal.” On the other hand, high levels of cyclin with a stable concentration of mitosis-promoting factor (MPF), complete DNA replication, and attachment of all sister chromatids with kinetochore spindle fibers act as “start signal.” 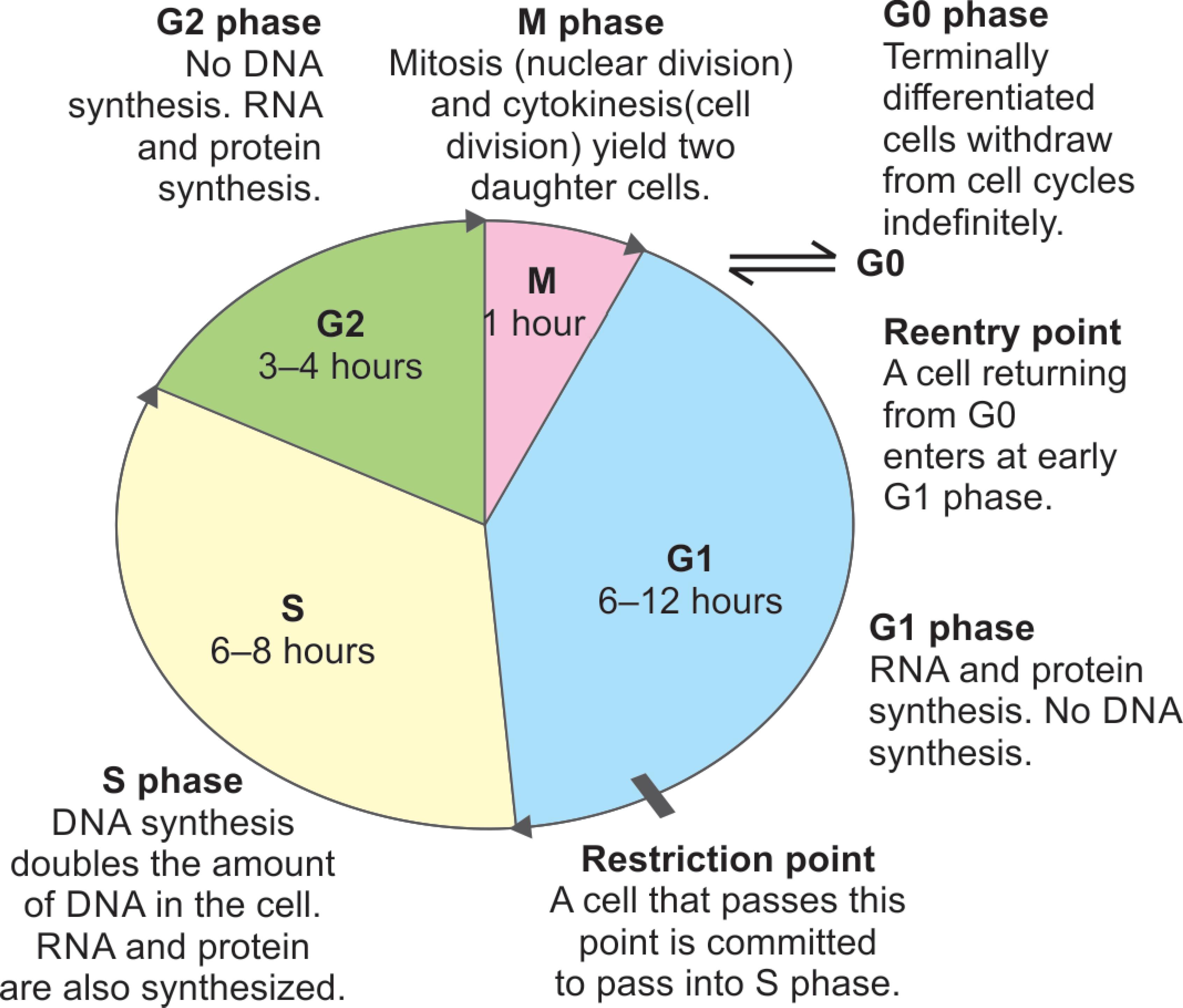 Similarly, external signals, such as the absence of adequate space to grow (in vivo), no proper anchorage in Petri dish (in vitro) act as external “stop signal,” Whereas, growth hormones can be added as “start signal”.11,12

CellCycle Checkpoints: The Checklist of the Cell

G1-restriction point checks if the cell is fully mature, with ample space and adequate supply of nutrients, then the growth hormone will induce S-phase. Otherwise, if the cell maturation is incomplete with inadequate space, nutrients, and growth factors, then the cell is destined to enter G0. At S-checkpoint by default, DNA is completely replicated with rising levels of DNA polymerase with its substrate (dNTPs) and cyclins. There is one important controlling mechanism that comes into play, termed as “replication licensing,” otherwise known as “The Fidelity Check of Cell Cycle.” It takes place by means of phosphorylatic degradation of origin binding protein, which is essential for the replication. It is the intrinsic property of an individual chromosome, which ensures single replication per each cell cycle.1,3,13–15 At G2 checkpoint, there occur peak levels of cyclin with increased activation of mitosis-promoting factor (MPF-kinase), which results in nuclear envelope disintegration. It also ensures that DNA replication in the S-phase has been completed successfully. It monitors the levels of growth factors and other related proteins as well. Then the M-spindle assembly/integrity checkpoint operates at the end of M-phase in order to sense proper spindle integrity, precise chromosomal orientation in metaphase plate, and appropriate binding of spindle fibers to chromosomes. If any of these three found defective, then the integrity checkpoint stops the cell cycle progression, thereby preventing inappropriate “chromosomal sorting.16–19”

Hunt, Hartwell and Nurse—Nobel Laureates from 2001—have discovered the key regulators of the cell cycle, CDK and cyclin.

Cyclin proteins are named so, due to their cyclic nature of production and degradation. They mainly trigger kinase activity. About 8 cyclins have been identified. Cyclin D, E, A, and B come to play serially during each cell cycle.

These are the enzymes affecting the molecular activity of those proteins, which help a cell to pass through various stages of the cell cycle. The cyclin-CDK complex phosphorylates important target proteins and ensures the cell to proceed through the cell cycle. On completion of the cell cycle, their levels decline quickly18,19 (Figs 3 and 4).

Cancer or malignancy is the unchecked and uncontrolled multiplication of cells. Cell cycle regulator genes or the checkpoint genes are either misregulated or mutated in cancer, for example as seen in case of overexpression of cyclin D in cancer of breast, esophagus, liver, and a subset of lymphomas. However, amplification of the CDK4 gene leads to malignancies like melanomas, sarcomas, and glioblastomas.20–24

A proto-oncogene is a normal gene having the potential to become an oncogene by mutations; while oncogene is a gene that when mutated, gains a function or is over-expressed, abnormally resulting in the conversion of a normal cell into a cancer cell. It also causes a rise in gene transcription by kinases. These kinases are called transcription factors which usually affect G1/S transition, causing increased cyclin-CDK expression with decreased inhibition at an inappropriate time of cell cycle e.g., SRC, RAS, MYC, BCL21,22 (Flowchart 1). 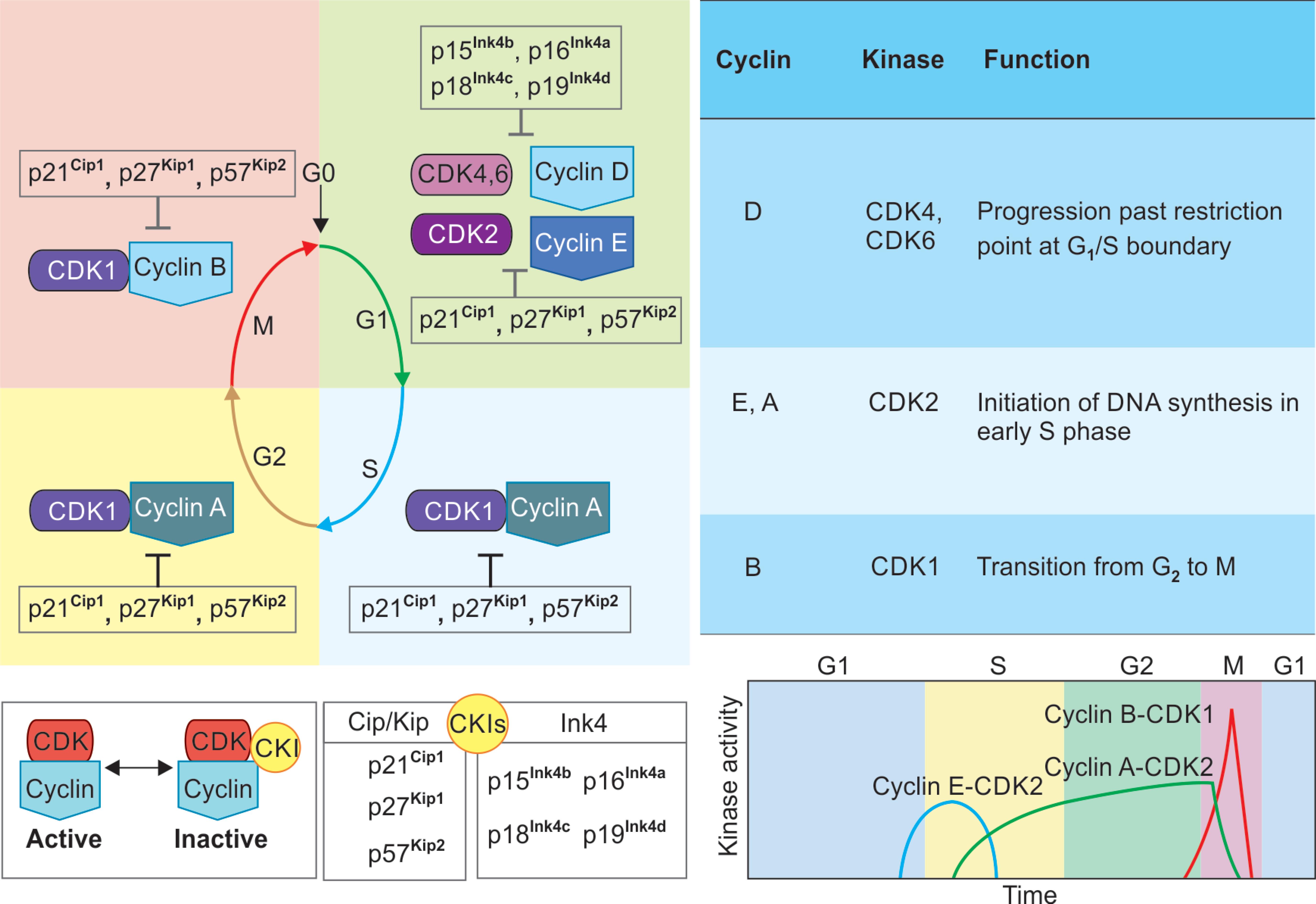 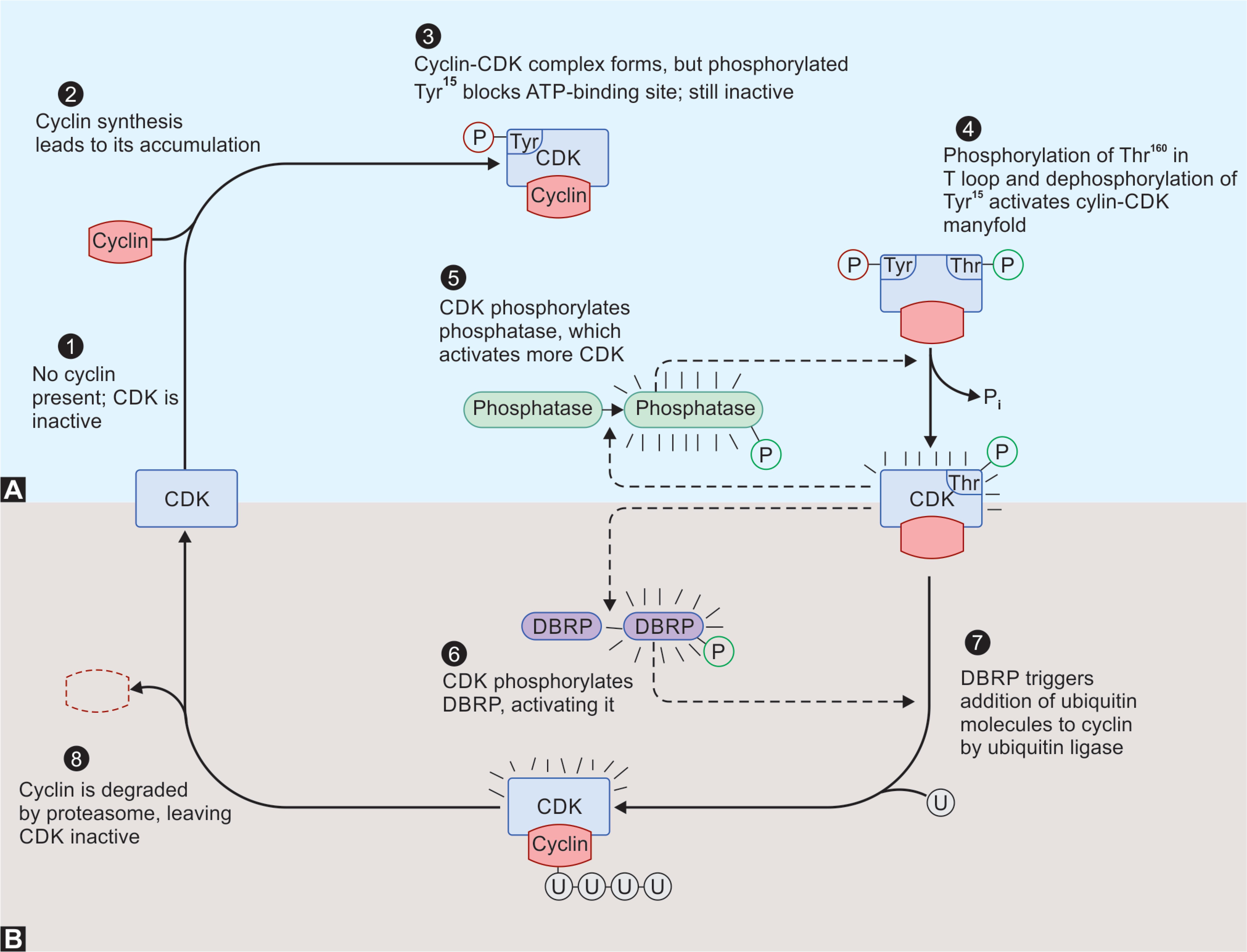 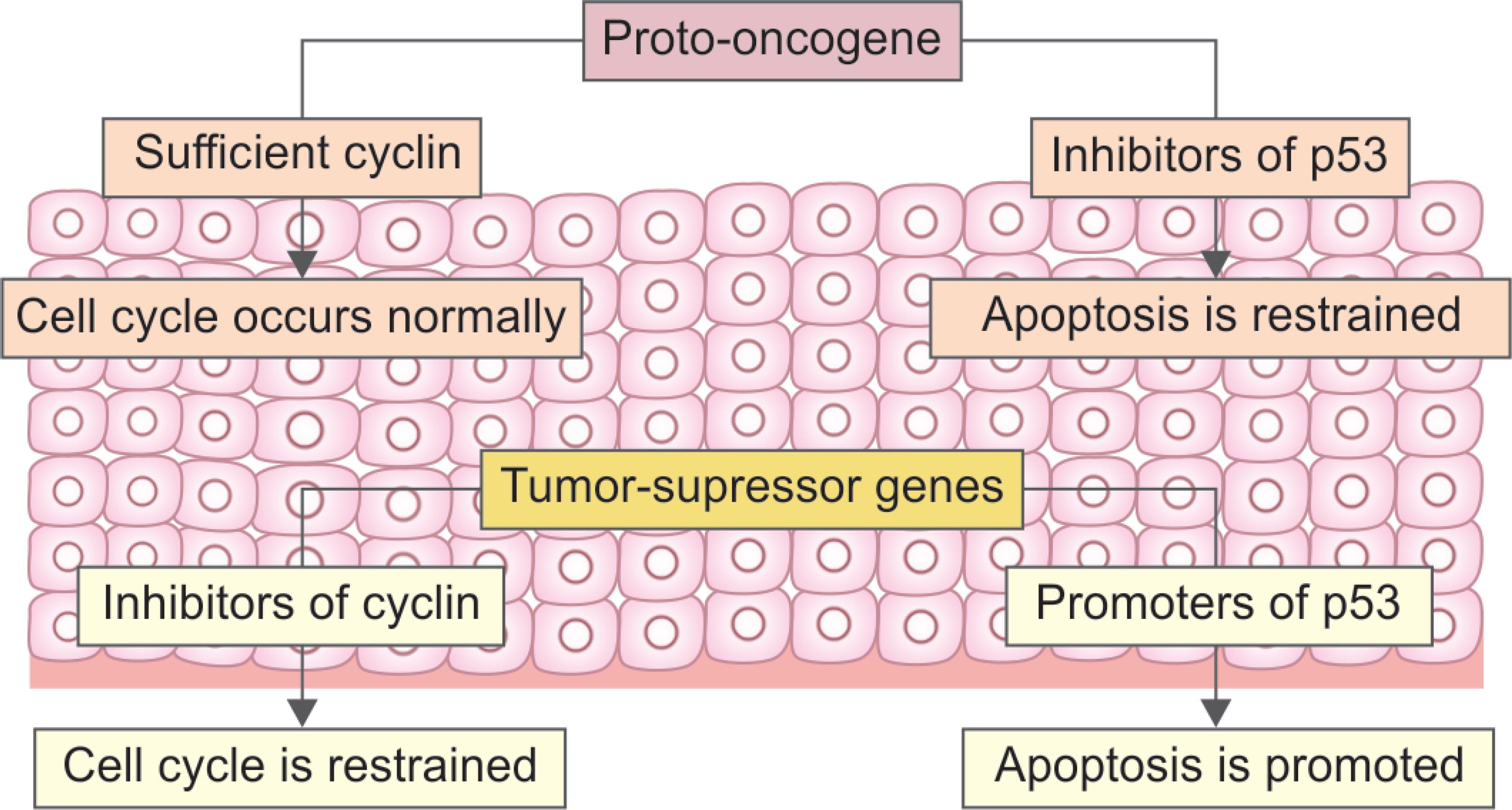 The checkpoint control proteins are coded by tumor suppressor genes (synonym: anti-oncogene). They prevent the entry of cells into S-phase in order to check the replication of damaged DNA, ultimately preventing abnormal cell division. Mutations in tumor suppressor genes are recessive but inheritable. So, both the copies must be knocked out to cause abnormal cellular division. They are principally involved in DNA repair, cell cycle control, and cell death (apoptosis) e.g., pRb, p53, APC, BRCA 1 and 2.22,23

Retinoblastoma protein (i.e., pRb), the product of the retinoblastoma (Rb) gene, which is a tumor suppressor gene, located on chromosome 13q is a ubiquitously expressed nuclear phosphoprotein, that plays a key role in regulating the cell cycle. It acts by binding with E2F, a regulatory transcription factor, in order to have control over cell cycle progression. It controls the cell cycle progression at the transition from G1 to S phase. It exists in the active hypophosphorylated state; upon binding to E2F, the cell enters into a quiescent state. pRb gets inactivated by phosphorylation, thus phosphorylated Rb cannot bind to E2F, thereby cell cycle proceeds to S phase. Germline mutations or loss of the Rb gene lead to retinoblastomas, osteosarcomas. Somatically acquired Rb gene mutations cause malignancies, such as glioblastomas, small-cell carcinoma of lung, breast cancer, and urinary bladder cancer8,24–30 (Fig. 5). 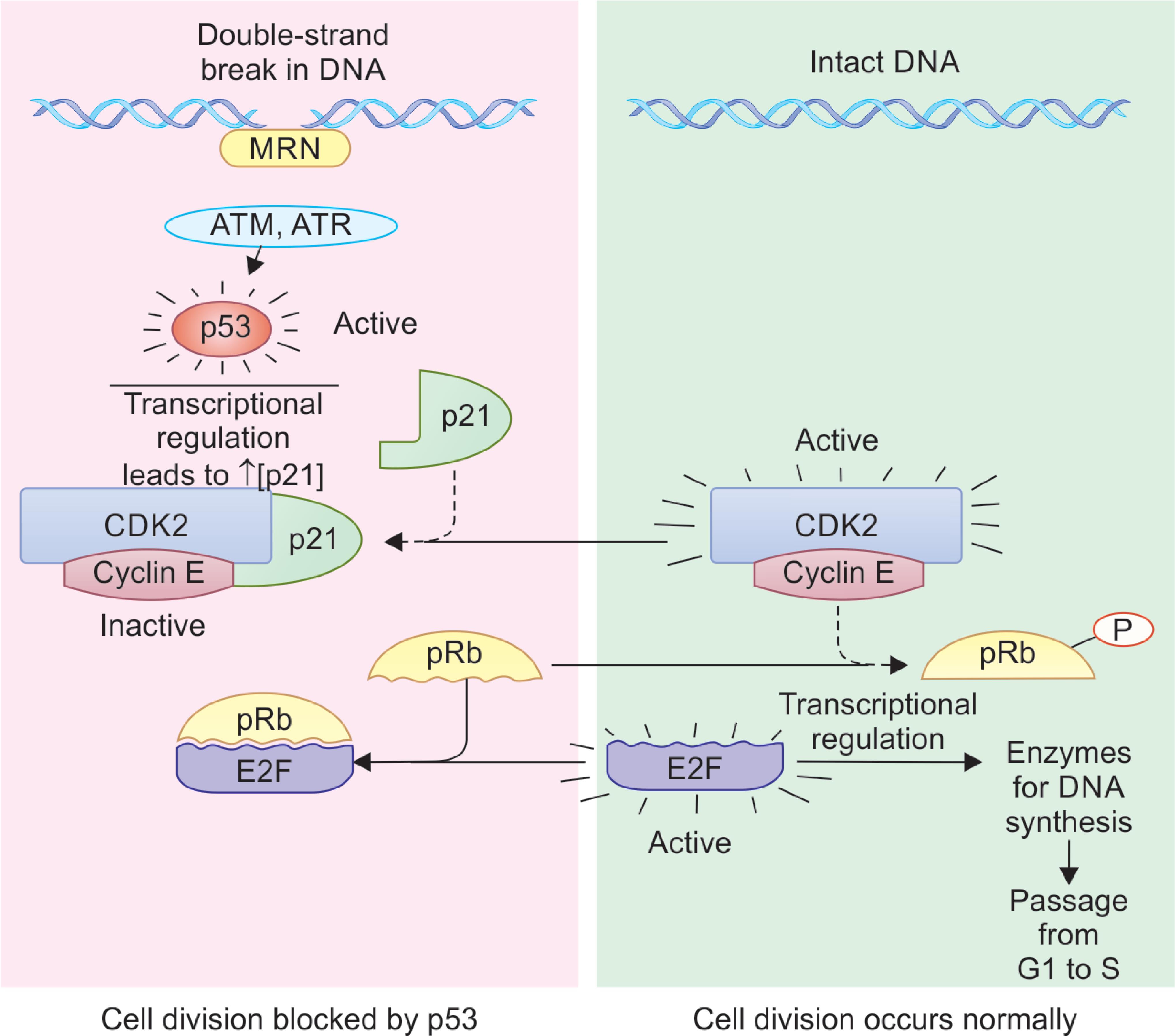 Fig. 5: Regulation of passage from G1 to S by phosphorylation of pRb

p53 gene is located on chromosome 17p and it is the most common (80%) target for genetic alteration in tumors as suggested by genomic sequencing study. It mainly controls G1 and G2 checkpoints. p53 acts as a “molecular policeman” that prevents the propagation of genetically damaged cells through the cell cycle by acting as a DNA binding transcription factor. Homozygous loss of p53 occurs more or less in all types of cancer, such as cancers of the lung, colon, and breast, the three leading causes of cancer deaths.31–34

Mechanism of Action of p53

Various carcinogens and mutagens for example, heat, ionizing radiations, and toxic chemicals cause DNA damage. In normal cells with intact and functional p53, there occurs activation of p53 which upon binding with DNA, leads to the up-regulation of target genes. It results in the activation of p21 (CDK inhibitor), which in turn causes temporary arrest (quiescence) of the cell cycle at the G1 checkpoint. By another GADD45 mediated mechanism, the cell tries to perform DNA repair. If the DNA repair is successfully attained, then the cell cycle resumes from quiescence and proceeds further. But if DNA repair fails, then the cell either undergoes permanent cell cycle arrest (senescence)with that damaged DNA or programmed necrobiosis (apoptosis). Thus, p53 inhibits neoplastic transformation by three aforesaid interlocking mechanisms31,35–37 (Flowchart 2).

These mechanisms operate in cells with intact p53. But when DNA damage happens in cells with p53 mutations or loss of p53, there occurs failure of activation of p53-dependent genes. So, the arrest of the cell cycle, as well as DNA repair, fail to take place in this situation, ultimately resulting in the formation of mutant cells. Furthermore, they expand with subsequent additional mutations, finally ending in the formation of a malignant tumor.36–39

As mentioned previously, the cell cycle is a series of coordinated events that comprise the process of DNA replication and cell division. There are two types of cell cycle control mechanisms. First, a cascade of protein phosphorylation that leads a cell from one stage to the next. Second, on the completion of critical events, there are several checkpoints to monitor the progress and delay progression to the next stage if found to be necessary. This checkpoint control is more supervisory as well as vigilant to sense flaws in the DNA replication and segregation.40 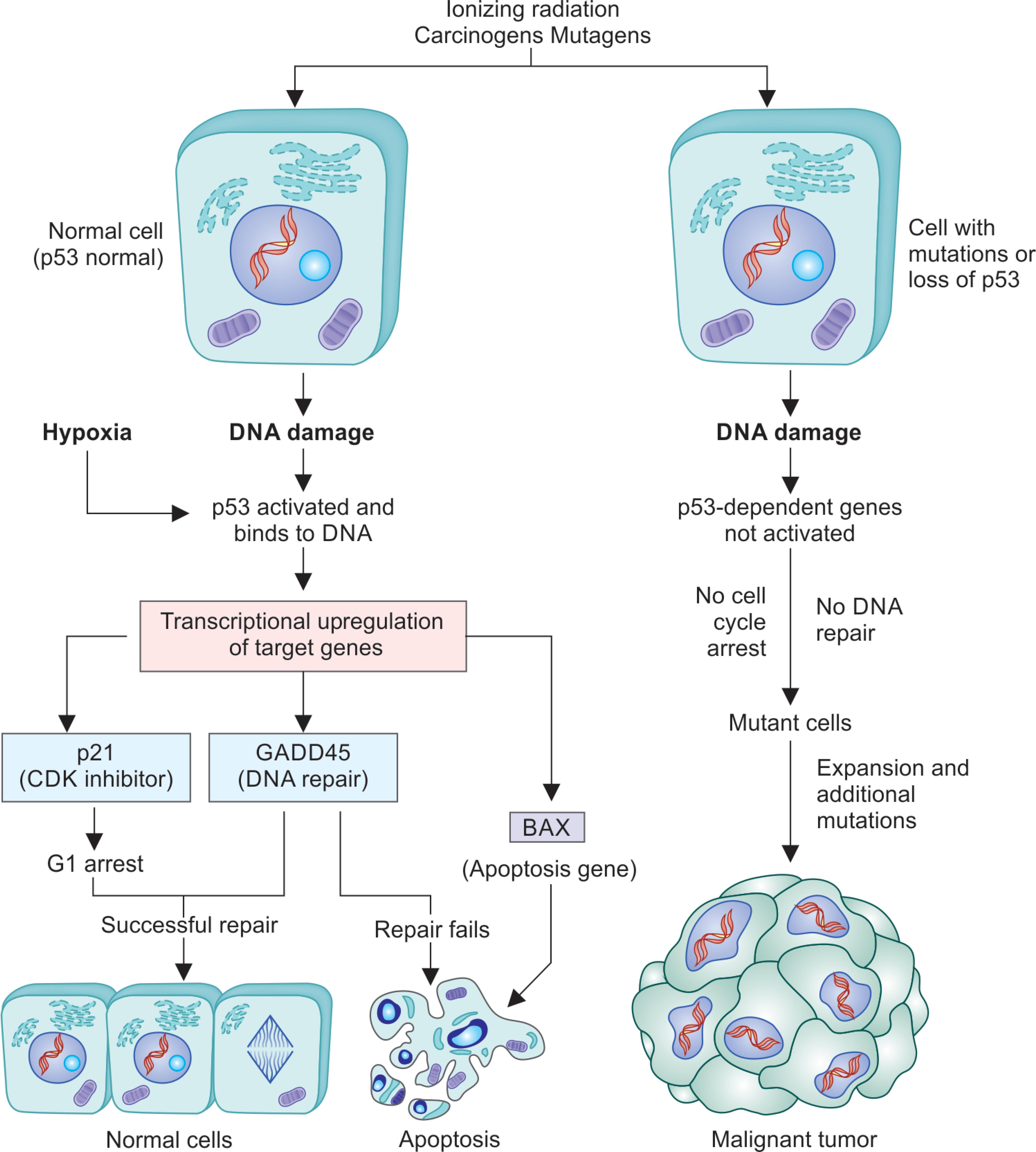 Flowchart 2: Role of p53 in the prevention of carcinogenesis 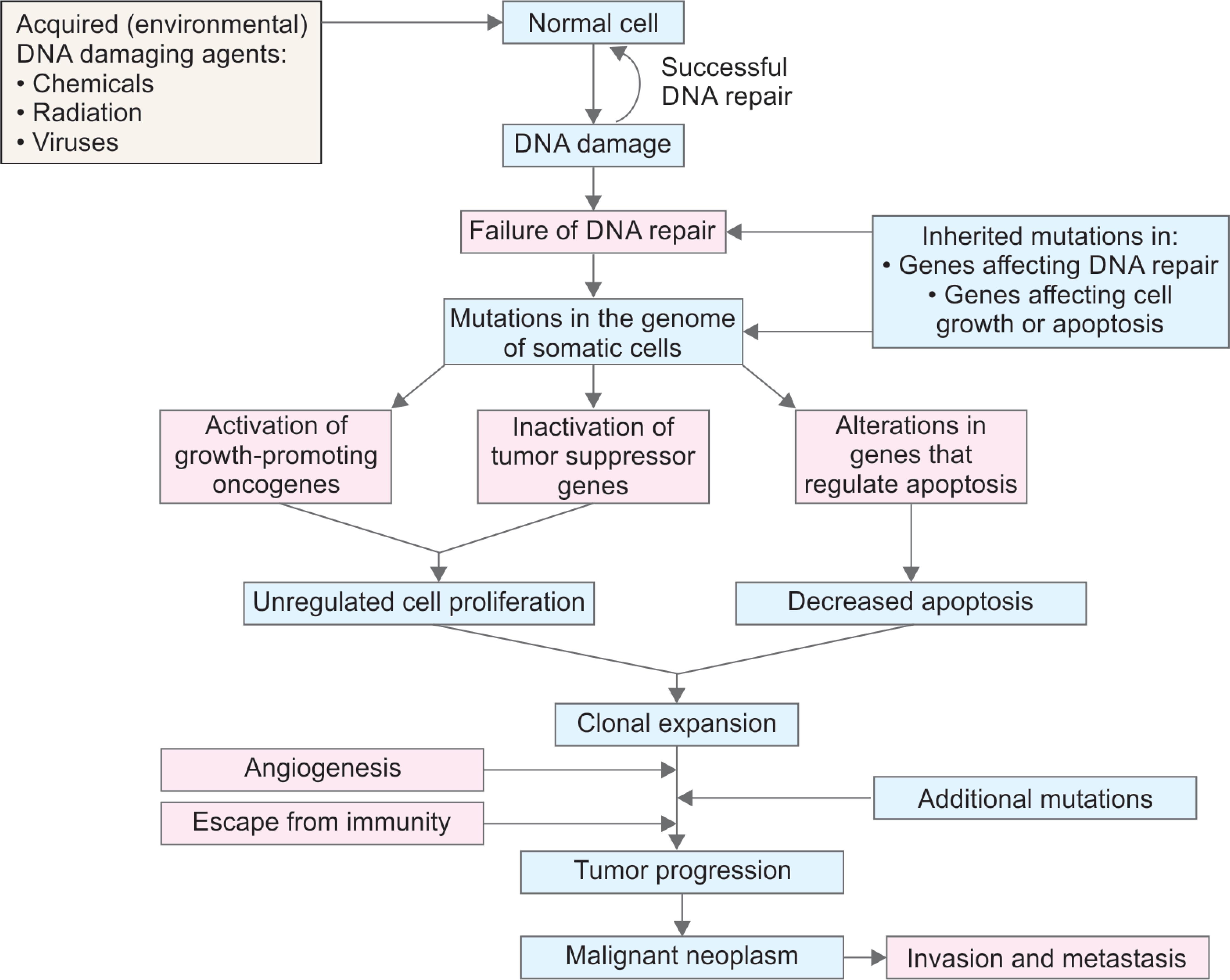 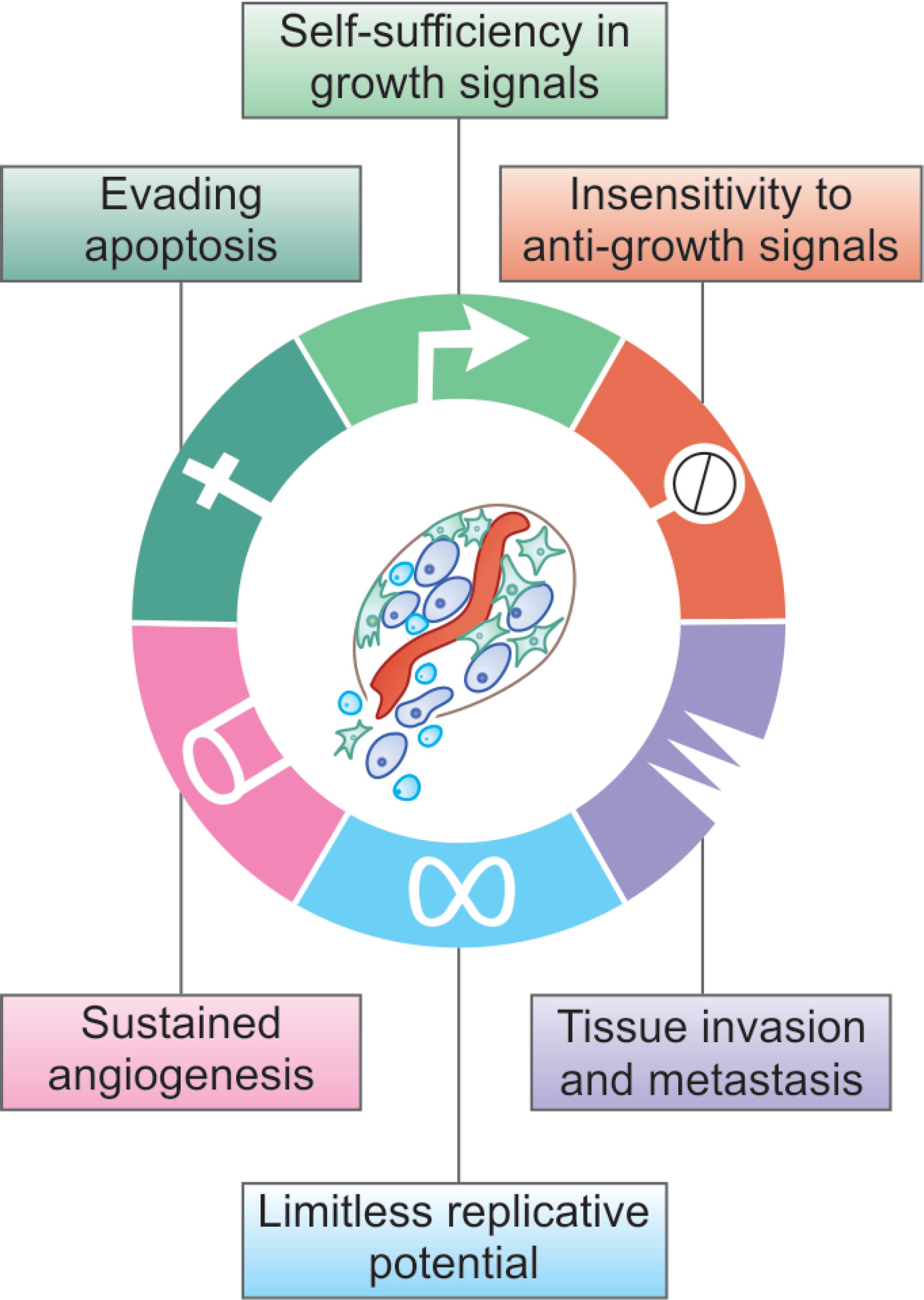 In this study, the essential principles behind the cell cycle checkpoints have been described in detail. The feature of detecting a defect within the cell cycle program, which in turn sends signals forward to change the oscillation of CDK activity in order to further control the cell cycle events. Some aspects of checkpoint signaling still remain to be clearly understood either as the basic underlying principle or within the context of diseases. Undoubtedly, the hidden aspects of checkpoint signaling can be further explored with the help of an ever-growing arsenal of highly sophisticated experimental tools and techniques, which will enable us to get a more clear and complete picture of the remarkable fidelity of the cell cycle.