Introduction: Gallstone is a very common disease condition and affects 10–20% of the adults in the developed countries and 20% of the patients present with acute calculous cholecystitis.1 One of the severe complications is gangrenous cholecystitis, which can occur in as high as 40%2,3 of patients with acute cholecystitis, and perforation of gallbladder (GB) in 2–18%.4 Gangrenous cholecystitis is defined as necrosis and perforation of the GB wall as a result of ischemia following progressive vascular insufficiency and is a severe complication of cholelithiasis. Factors such as male sex, advanced age, delay in seeking treatment, leukocytosis, cardiovascular diseases, and diabetes mellitus increase the likelihood of developing gangrenous cholecystitis and carry a significantly higher mortality rate between 15% and 50%.5 Hence, early diagnosis and immediate intervention are required in these cases. Laparoscopic cholecystectomy for gangrenous cholecystitis carries a high risk of morbidity and mortality. Hence, safer treatment modalities such as laparoscopic cholecystostomy help the patient to recover from the critical illness and the definitive procedure can be performed at a later, safer period.

We report a case series of five patients who presented with features of gangrenous calculous cholecystitis and who underwent laparoscopic cholecystostomy.

A 60-year-old hypothyroid female patient got admitted with gangrenous cholecystitis after being treated for 15 days at a local hospital conservatively for acute calculus cholecystitis. On admission, she had rebound tenderness and a palpable mass size of 10 cm in right hypochondrium and lumbar region. Computed tomography (CT) scan with intravenous contrast revealed distended GB with pericholecystic fat stranding. A defect was seen in the lateral aspect of the fundus which communicates to a collection that tracts through the right side of the liver up to the dome of the diaphragm (Fig. 1) with right pleural effusion. Common bile duct showed sludge (Fig. 2).

She was started on broad-spectrum antibiotics empirically and intravenous fluids and underwent endoscopic retrograde cholangiopancreatography (ERCP) and was found to have parapapillary choledochodudenal fistula for which fistulotomy was done and stent was placed in the common bile duct (CBD). Percutaneous drainage was attempted but was not successful because of the thick nature of the pus and hence was taken up for diagnostic laparoscopy and proceeded. At laparoscopy, falciform ligament, transverse colon, and duodenum all adhered to the undersurface of liver and to the anterior abdominal wall, and the liver was plastered to the undersurface of the diaphragm and rib cage on the right side. 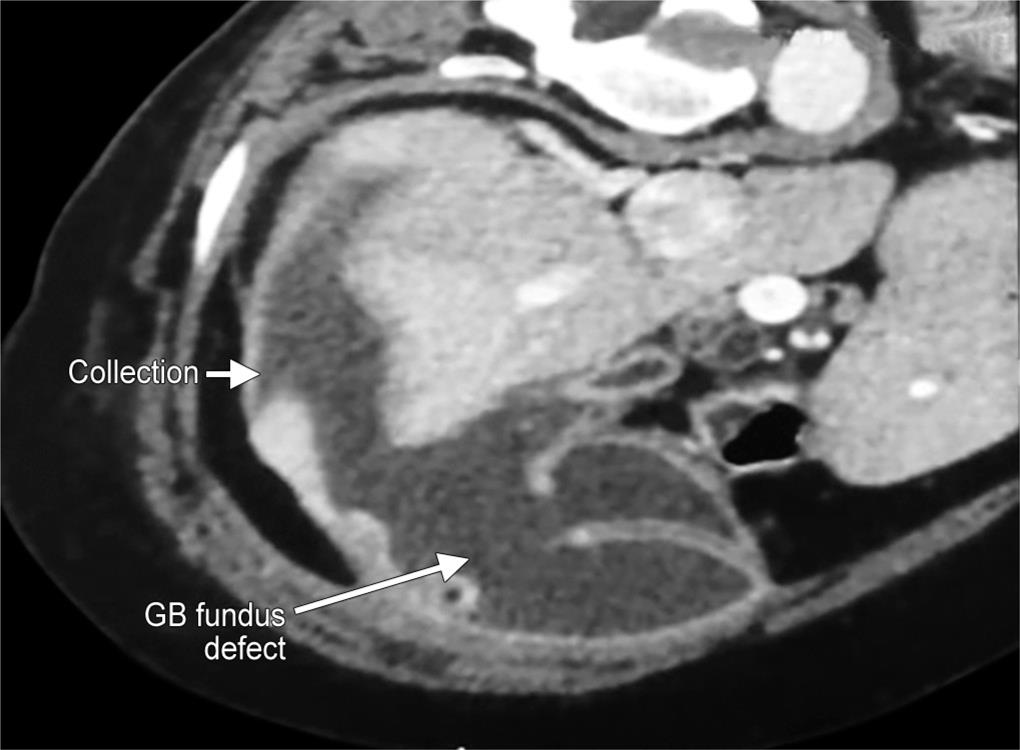 Fig. 1: Computed tomography scan of gallbladder showing fundal defect and collection in the right subdiaphragmatic space extending up to the dome of diaphragm 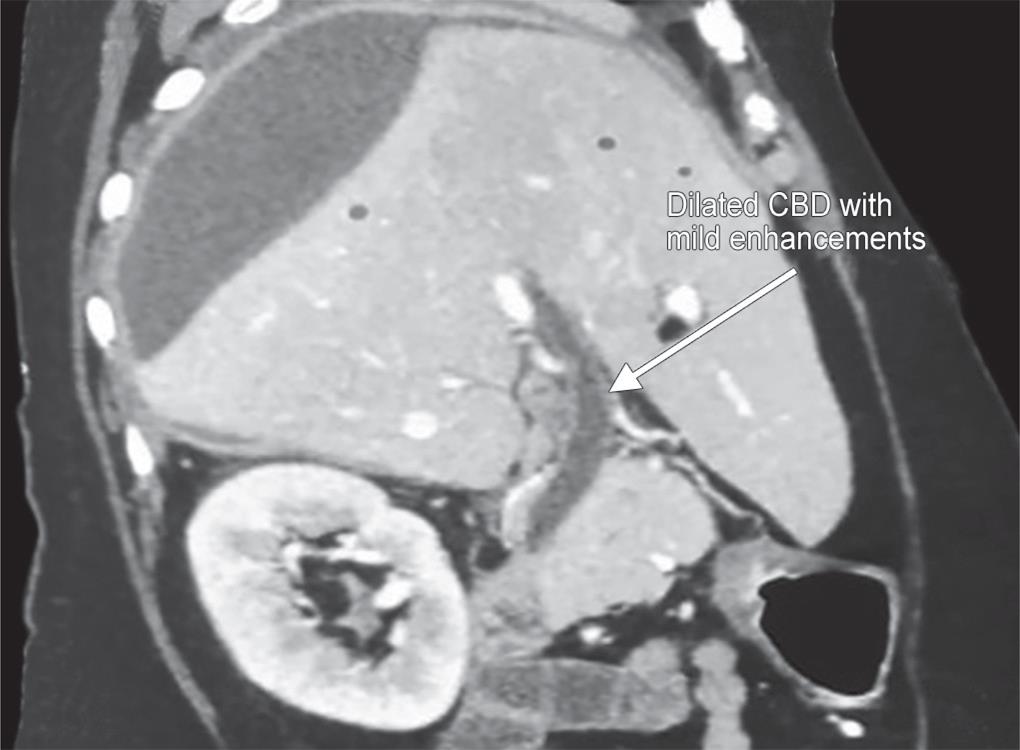 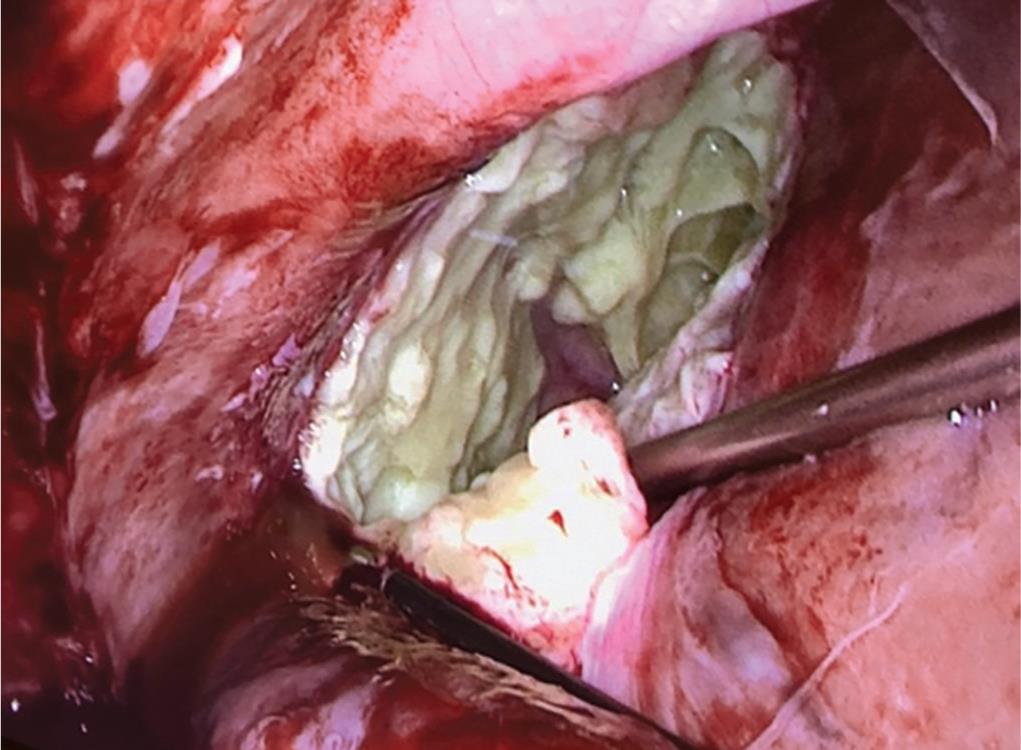 Fig. 3: Deroofing of abscess cavity in the right subdiaphragmatic space 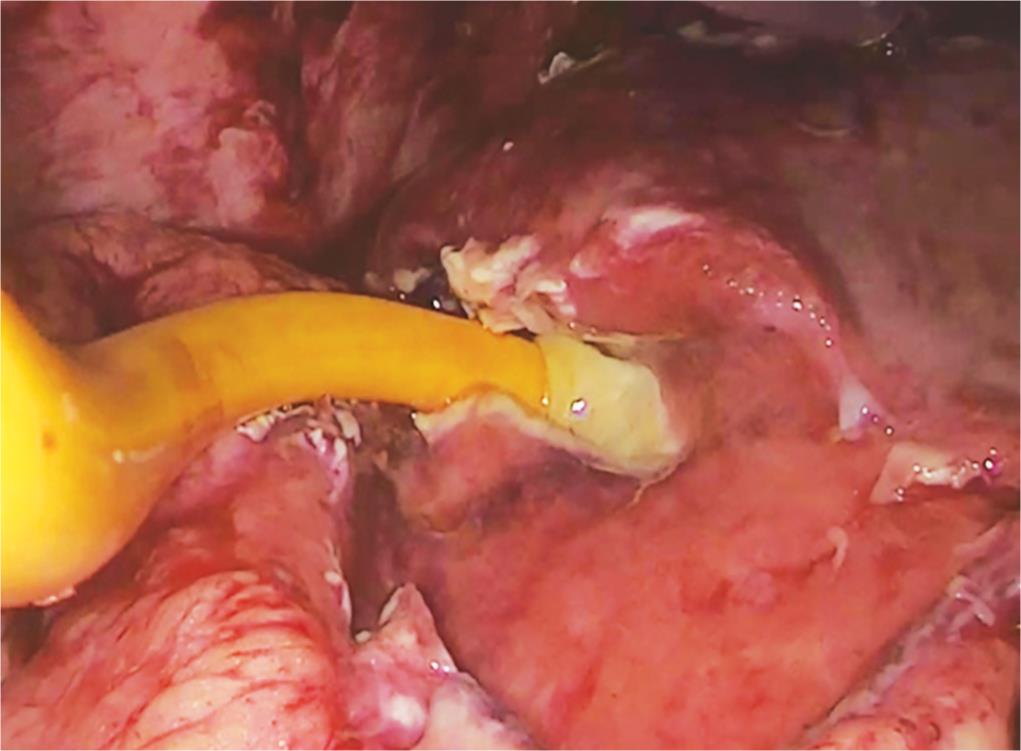 Fig. 4: Foley’s tube being inserted into the gallbladder through the fundal perforation

Liver was released from the undersurface of the right rib cage. After the anterior abdominal wall adhesions were released by blunt dissection, pus collection was observed around the fundus which was walled by bowel and anterior abdominal wall let out, and the small bowel and omentum separated from the undersurface of the liver. A defect of 1 cm was seen in the fundus of GB with gangrenous wall, and the rest of the GB was not delineated. There was another abscess cavity in the right subdiaphragmatic space extending up to the dome of the diaphragm and deroofing done and about 150 mL pus was drained and send for culture and sensitivity (Fig. 3).

Multiple pearly white stones were removed from the GB. After a thorough wash, 32 F chest drain was placed in the right subdiaphragmatic space, 20F Foley’s tube was inserted by transperitoneal technique into the GB (Fig. 4) and the balloon was inflated using 20 mL sterile water.

She was shifted to surgical high-dependency unit postoperatively and recovered well, was discharged with subhepatic drain, and underwent laparoscopic cholecystectomy after 3 months.

Even though the incidence is low, acute cholecystitis can cause GB perforation in 2–18%4 of patients and most common location was found to be in the fundus of the GB. Niemeier et al.6 classified GB perforation into three types, i.e.,

Type III (chronic): cholecystoenteric fistula of the GB with or without cholelithiasis.

In our study, five of our patients were female and one was male; and four of them were aged between 55 and 65, the oldest patient being 64 years. One patient was 48-year-old. The study patients’ average age being 58 years.

All patients had an elevated white blood cell (WBC) count, with an average value of 14,222. Parker et al.,9 increased WBC count are not the diagnostic indications for GB perforation. Roslyn and Busuttil4 reported that type I and type II GB perforation mostly occur in younger patients, around the age of 50 years, whereas type III GB perforation is more common in the elderly individuals. Our study being a small series, no significant findings were observed with age and type of perforation.

The mortality rate is high in patients with GB perforation. Hence, early diagnosis, stabilization of patient, and intervention are essential. Cholecystectomy, drainage of abscess, and abdominal lavage are the necessary treatment of GB perforation.4,15 The reported mortality rate is up to 7% in emergency cholecystectomy.16 Cholecystostomy is a reliable option for patients with biliary sepsis and can be done by ultrasound guidance or laparoscopically.

Laparoscopic cholecystostomy can be done in two ways, namely, transperitoneal and transcannular techniques. In transperitoneal technique, the Foley’s catheter is introduced into the perforated site of the GB and the balloon is inflated and finally fixed to the anterior abdominal wall. In transcannular technique, the trocar is used to puncture the GB, the catheter is introduced through the cannula into the GB, and the balloon is inflated.16 Laparoscopic cholecystostomy is a safe procedure with minimum complications, including dislodgment of Foley’s catheter, bile leakage into the intraperitoneal cavity, and bleeding.17 So in a critically ill patient, resolution of sepsis can be achieved by cholecystostomy; and a definitive procedure like cholecystectomy can be planned electively when the patient is stable in calculous cholecystitis. No further procedure is required in case of acalculous cholecystitis. In our series, the average hospital stay for patients with GB perforation was 13 days. In a study by Nandyala et al.,19 it was 8 days and 15 days for calculous and acalculous cholecystitis, respectively. In our series, all patients underwent interval cholecystectomy, five of them were managed laparoscopically and one was converted to open cholecystectomy due to unclear anatomy. Average duration from laparoscopic cholecystostomy to interval cholecystectomy was 82 days.

Cholecystostomy is an ideal procedure for patients in biliary sepsis associated with acute cholecystitis and can reduce the surrounding inflammation by definite elective cholecystectomy. Early diagnosis and emergency surgery are crucial in surgical management of gangrenous cholecystitis because of the high morbidity and mortality. So from our experience, we can conclude that laparoscopic cholecystostomy is a safe procedure and should be offered to patients who have GB perforation especially in patients with comorbid conditions and who are critically ill.