How to cite this article Jyothirmayi K, Kumar P. Analysis of Distribution of Allergens and its Seasonal Variation in Allergic Rhinitis. J Med Sci 2019;5(3):59–62.

Introduction: Allergic diseases are common and they have increased in frequency over the last few decades. More than 30% of the population suffers from allergic rhinitis (AR). It is defined as a combination of two or more symptoms, namely, watery rhinorrhea, nasal obstruction, itching, and sneezing. Allergic rhinitis occurs when these symptoms are the result of immunoglobulin E (IgE)-mediated inflammation following exposure to allergens. The common inhalant allergens causing AR are house dust mites, pollens, fungi, and insects. Skin prick test (SPT) is the gold standard test in the diagnosis of AR.

Aim: To study the distribution of inhalant allergens in AR and to find out seasonal variations in allergens by SPT.

Materials and methods: A descriptive study was done in 120 patients who came with symptoms of AR to ear, nose, and throat (ENT) outpatient department (OPD) of tertiary care hospital. The study was done from November 2017 to October 2018. The patient was clinically evaluated and the SPT was performed to analyze the distribution of inhalant allergens and its seasonal variations.

Results: The majority of the patients are males between 21 and 30 years of age. Majority of the people are urban residents. Dust mites followed by pollens yielded the highest number of positive responses among inhalant allergens. Dust mites and dusts are more common during winter season, pollens are more common during summer season, and fungi and insects (5.83%) during rainy season.

Conclusion: Analyzing the distribution of specific allergens for a particular geographical area and its seasonal variation helps in appropriate diagnostic evaluation of allergens, educating the patient on what allergen to avoid and also to find the best formulation of allergen immunotherapy for effective AR treatment.

Allergic rhinitis (AR) is an inflammatory nasal mucosal disease characterized by attacks of sneezing, profuse watery nasal flow, nasal congestion, and itching. This reaction is caused by immunoglobulin E (IgE)-mediated type I hypersensitivity reaction and is secondary to the allergic contact of the nasal mucosa. Physical examination typically reveals conchal hypertrophy, pale color of the concha mucosa, and excessive serous secretion. Allergic rhinitis has been classified as seasonal, perennial, and occupational AR based on the period of exposure to the allergen. Perennial AR is usually caused by house dust mites, fungi, insects (cockroaches), and animal feathers. Seasonal AR is caused by various extraneous allergens such as pollen and fungi. Distinguishing these two types may not always be straightforward. For example, a patient with seasonal AR may have allergies to a variety of pollens that develop at different times of the year, and their symptoms may suggest perennial rhinitis. Also, in some regions, pollens and fungi may be present throughout the year. On the contrary, symptoms of perennial allergy may not persist throughout the year.1

Epidemiological studies obtained from different countries show the prevalence of respiratory allergy as 15–30%.2 In an allergic population, sensitivity in urban areas is greater than that in rural areas2 Aeroallergens (airborne allergens) play an important role in respiratory allergic diseases, especially asthma and AR. Sampling from aeroallergens provides information that is clinically useful in determining possible reason for allergic symptoms in sensitive people Aeroallergens, including pollens (plant pollens), fungi, dusts, domestic mites, domestic animals, and insects, are the most important factors initiating allergic diseases.2

The prevalence of AR has increased eventually over the years. It is estimated that 400 million people suffer from AR, which affects 20% of adults and 40% of children in the US and UK (Bousquet et al., 2007; Gupta, Sheikh, Strachan, and Anderson, 2004). In India, 20–30% of the population is suffering from AR.3

Allergic disorders such as asthma are often underdiagnosed and undertreated, creating considerable burden on individuals and families.4 It is responsible for approximately 1% of all disability-adjusted life years lost worldwide.4 Allergic disorders and its complications have also been reported to increase healthcare costs of the individual.5 Therefore, even though mostly a non-life-threatening condition, they can impair the person’s ability to function. It thus has a huge socioeconomic impact and can adversely influence psychological well-being and quality of life.6–8

Allergic rhinitis is closely associated with the release of type-2 helper cells (TH2)-type immune response, antigen-presenting cells, eosinophils, basophils, and macrophages as the main cellular elements and IgE as well as all other mediators such as histamine, leukotrienes, and interleukins, granulocyte-macrophage colony-stimulating factor and various chemokines. Moreover, pollen is considered as one of the most abundant and inevitable elements in AR.9

Skin prick test (SPT) is a standardized test widely used in the diagnosis of suspected cases of IgE-mediated allergy. It is considered as the gold standard in the diagnosis of allergy.10 This method does not require spending longtime and high cost, and compared to the same experiments, its sensitivity and features are very high. This test can play a determining role in adopting prevention methods and patients’ treatment and desensitization. Usually, positive skin reaction rate is highly associated with clinical findings, and it can even determine the severity of the disease. Avoiding allergens shall be considered as the first-line prevention in controlling AR, even when it is not completely effective.

This method may reduce the need for further treatment. Identifying the most common aeroallergens to which the patients are allergic plays an important role in diagnosis and treatment of AR.

Identifying the aeroallergens of each region helps preventing AR disease in an advisable time, while it is effective in selecting the type of allergy vaccine for appropriate treatment when prevention and medical treatment are not effective and allergy vaccines are required.

For the above reasons, we decided to study the prevalence of allergens and their relationship with AR in our own region.

This descriptive study was conducted in Allergy Clinic, Department of ENT in a tertiary care hospital from November 2017 to October 2018. The approval of Institutional Ethical Committee was taken.

Patients coming to the ENT OPD with symptoms of AR (clinical symptoms including sneezing, runny nose, itching, or nasal congestion along with eye or throat involvement) were considered for the SPT and studied.

The inclusion criteria are patients coming to the hospital complaining of sneezing, runny nose, itching, or nasal congestion along with eye or throat involvement and diagnosis of AR, patients of age 10–40 years, willing to undergo the necessary examinations, and giving consent for SPT.

The exclusion criteria included underlying all other types of rhinitis such as vasomotor and infectious rhinitis, taking antihistamine and corticosteroid drugs over the past 2 weeks, heart disease, acute asthma exacerbation, deviated nasal septum, any nasal mass, or nasal polyposis. In this study, the skin test with 5 types of aeroallergens that includes 18 aeroallergens was performed on all patients who fits into the inclusion criteria enumerated above.

Patients coming to the ENT OPD were asked about their history and then the ENT examination was performed to rule out deviated nasal septum, nasal polyps, or any mass in the nasal cavity. Patient was sent for the following investigations: complete blood count-erythrocyte sedimentation rate (CBC-ESR) and absolute eosinophil count (AEC). Diagnostic nasal endoscopy was done.

Before doing the SPT, the patients were explained about the test and its local and systemic complications. Consent was taken from the patient. The skin test was considered valuable if the patients had a positive reaction to histamine (positive control) with erythema of greater than 6 mm, and a negative reaction to normal saline with edema and erythema of about zero. Otherwise, they were excluded from the study.

While performing the tests, the used kits were frequently checked for expiry date. The tests were performed using 18 aeroallergens.

The allergen extracts were put on the skin of both forearms with at least 2 cm distance from each other, and the prick test was performed using a lancet device. The skin reaction was measured on-site after 15–20 minutes through formation of skin erythema. Erythema with a diameter of more than 6 mm was considered as a positive skin reaction. The test results were recorded on the sheet related to skin test.

All the data collected were compiled and entered into a Microsoft Excel worksheet. Descriptive statistics was used to present the data. Qualitative variables were presented as frequencies and percentages. The data were analyzed using Statistical Package for Social Sciences (SPSS software v.21.0).

In this study, the questionnaire and skin test were completed for 120 individuals.

This proved that AR occurs less in older age-group as immunosuppression and atrophy of nasal mucosa occur, and the number of T cells in the blood declines with age, whereas these are higher in younger age-group. This is also the age-group in India when people start to move to a different location for their study or work and females move after marriage. 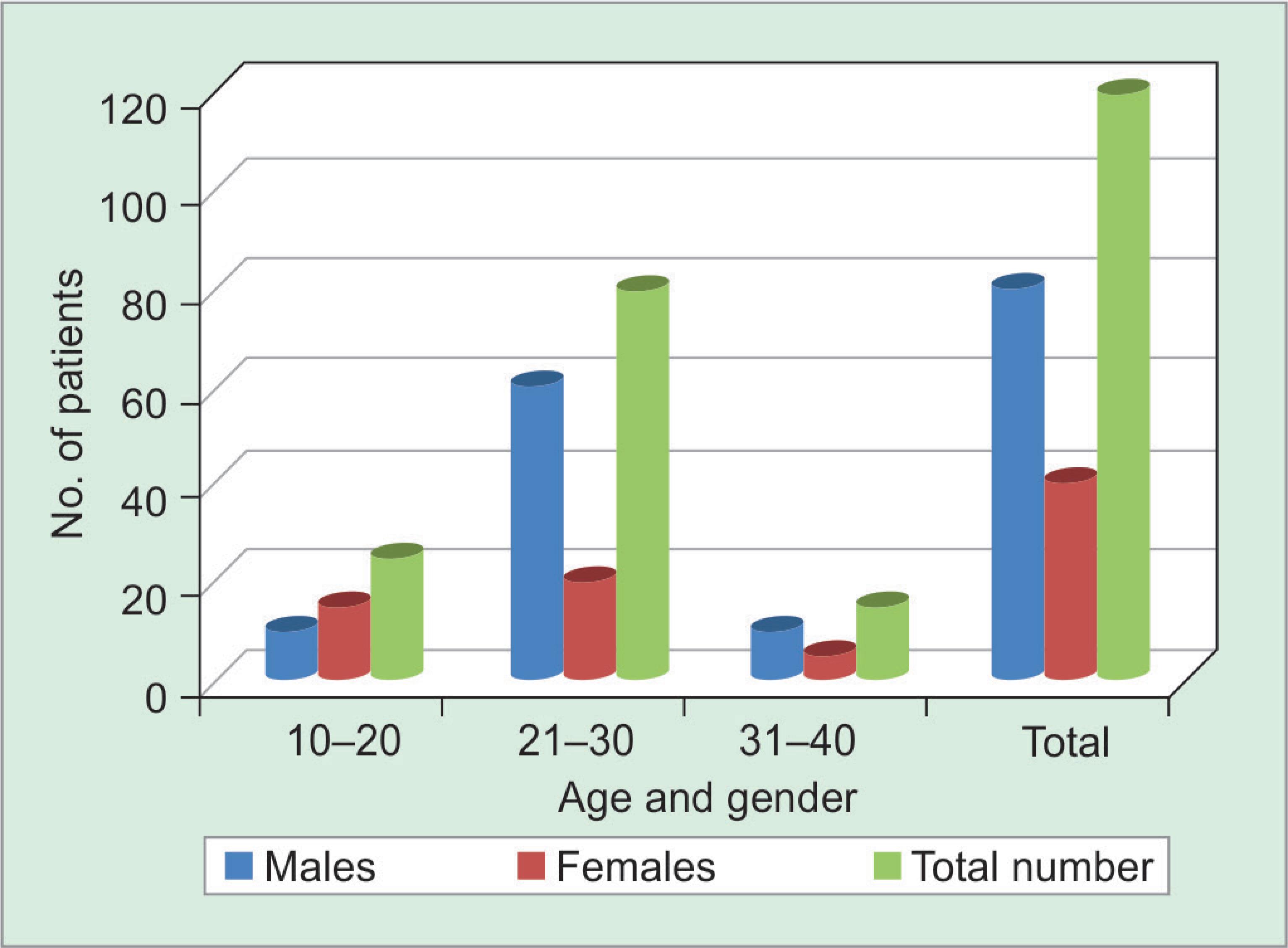 Fig. 1: Distribution of subjects according to age and gender 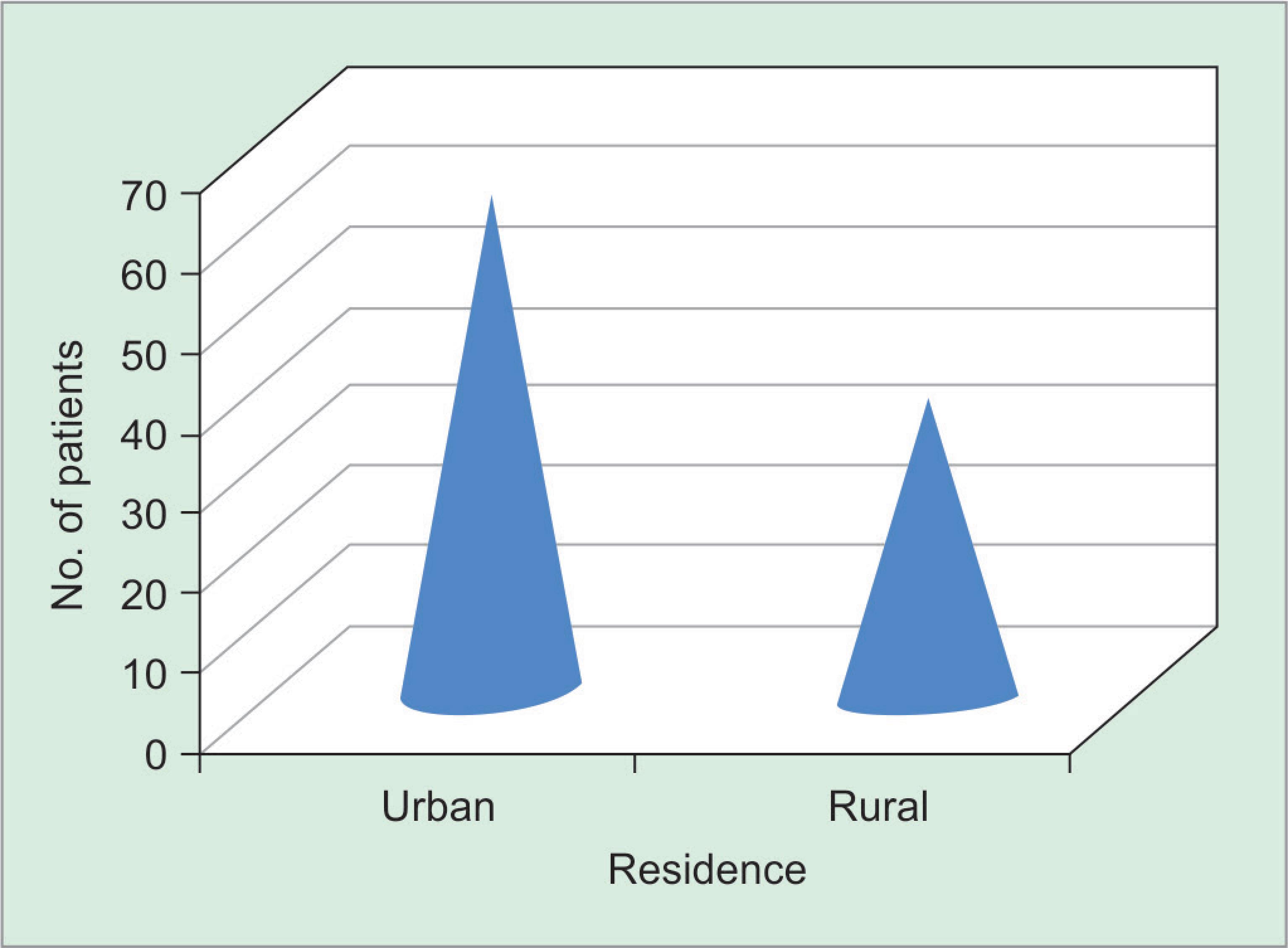 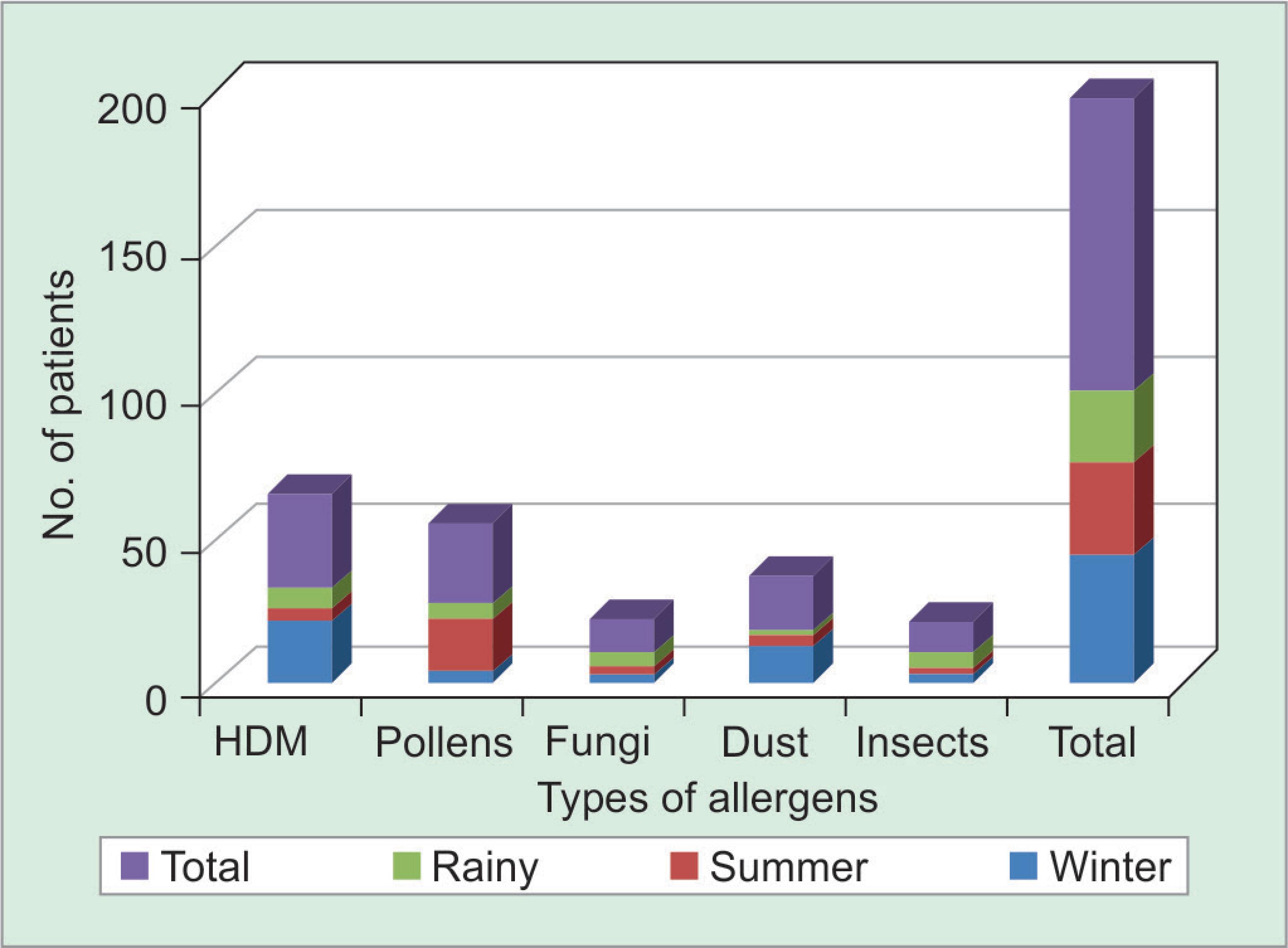 It was observed in our study that AR is more common in males than in females, with 66.66% in males and 33.33% in females. These observations were consistent with those of Ciprandi et al.12 The higher incidence of AR observed in males compared with females is possibly because of more exposure of males to workplace-related allergens and stress. Another factor that can be considered is the conservative nature of people in India, with females not showing up at hospital for their ailments (Tables 1 to 4).

Dust mites followed by pollens yielded the highest frequency of distribution. They are the most common allergens in patients affected by AR. Dust mites followed by dusts were more common during the winter season. Fungi and insects were found to be more common in the rainy season and pollens in the summer season. More males were affected and the urban population was affected more than the rural. We would like to emphasize that diagnostic evaluation of allergens is needed to educate the patient on what allergen to avoid and also helps to find the best formulation of treatment.

3. University A analyst at PG is M in PS has worked as an AP in PBDS, Drugs is a published research scholar S has worked on severalProjects like A-U, Formulations SR, books FTFH lies in, writing, Travel SL to, et al. Prevalence allergic rhinitis and its diagnosis with therapeutic considerations [Internet].Knowledge Tank. 2017 [cited 2019 Oct 24].