Background: Postoperative cognitive dysfunction (POCD) is one of the known complications after cardiac surgeries. The incidence of cognitive dysfunction varies considerably but may be as high 50–70% at 1 week after surgery, declining to 30–50% after 2 months. Carotid artery atherosclerosis is a major risk factor for stroke and subsequent cognitive impairment. Near-infrared spectroscopy (NIRS) is a system used for monitoring the activity of the brain.

Materials and methods: Forty-three patients with asymptomatic carotid artery lesion (>70%) undergoing elective off-pump coronary artery bypass (OPCAB) underwent preoperative and postoperative neuropsychological evaluations with the Montreal cognitive assessment (MoCA) score. The patients were randomized to receive or not to receive neuromonitoring with NIRS and subsequent management according to an algorithm. Twenty-one patients received NIRS monitoring and were managed accordingly and twenty-two patients did not receive NIRS monitoring and management.

Results: There was no statistically significant difference in the incidence of POCD between the groups that did or did not receive neuromonitoring and subsequent management based on NIRS at 1 hour, 24 hours, and 1 week post-extubation.

Conclusion: Neuromonitoring with NIRS and subsequent management does provide a systematic way of troubleshooting problems of cerebral desaturation. However, it has not shown any statistically significant difference in the MoCA scores taken at 1 hour, 24 hours, and 1 week post-extubation.

The POCD is one of the complications after cardiac surgery. The incidence of cognitive dysfunction varies considerably but may be as high 50–70% at 1 week after surgery, declining to 30–50% after 2 months.1 Socioeconomic implications of POCD are profound; they include loss of independence, extranursing care, and a high rate of discharge to long-term care.2 Carotid artery atherosclerosis is a major risk factor for stroke and subsequent cognitive impairment.1,3 NIRS is a system used for monitoring the activity of the brain. A randomized prospective study was done on the effects of NIRS on the neurocognitive functions in patients with asymptomatic carotid artery disease undergoing on-pump coronary artery bypass grafting (CABG).4 The results had been promising. We wanted to know the effect of NIRS monitoring and intervention on OPCAB grafting in patients with asymptomatic carotid artery disease.

The purpose of this study is to assess if preventing significant cerebral desaturation intraoperatively in patients with asymptomatic carotid artery disease helps reduce the occurrence of early POCD after OPCAB surgeries.

Setting: It is a hospital-based study done at Sri Jayadeva Institute of Cardiovascular Sciences, Bengaluru.

The study was conducted on patients undergoing elective coronary artery bypass surgeries at Sri Jayadeva Institute of Cardiovascular Sciences and Hospital. All the patients falling under inclusion criteria were randomized by computer-generated randomization.

A predesigned and pretested proforma was used to collect information. The cognitive assessment was done preoperatively and postoperatively using MoCA and the patients were scored accordingly.

Method of Collection of Data

Patients belonging to American Society of Anesthesiologists (ASA) physical status I–IV aged between 40 years and 70 years, with asymptomatic carotid atherosclerosis and with lesions >70% as evidenced by carotid Doppler who underwent elective OPCAB surgeries under general anesthesia.

After the approval of the Institutional Ethical Committee, 50 patients scheduled to undergo elective OPCAB surgeries were enrolled in the study. All patients who met the inclusion criteria underwent a thorough preanesthetic evaluation. The cognitive assessment was performed using the MoCA test by a resident anesthesiologist not involved in the study and preoperative scores were documented. A written informed consent was taken from the patients. Patients were randomized in two groups by a computer-generated list: group N (patients receiving NIRS monitoring) and group 0 (patients not receiving NIRS monitoring). All patients were kept nil per oral overnight. The patients were taken to the operating room and standard monitors were connected which include electrocardiogram (ECG), arterial line, pulse oximetry, and NIRS monitor (in patients who will be receiving NIRS monitoring). Baseline vital parameters were documented. The patients were preoxygenated for 3 minutes. Anesthesia was induced with titrated doses of propofol IV and fentanyl 5 μg/kg IV, after confirming the ability to mask ventilate, vecuronium 28 0.1 mg/kg IV was administered. The patient was mask ventilated with oxygen and isoflurane (1–2%) for 3 minutes, following which the trachea was intubated with an appropriate size endotracheal tube. After confirming that bilateral equal air entry, the endotracheal tube was secured. The patient was connected to a ventilator with appropriate ventilatory settings. The anesthesia was maintained with oxygen, air, and isoflurane (1–2%) with controlled ventilation. Temperature probe and nasogastric tube were inserted and secured. The right internal jugular vein was cannulated and double-lumen central venous catheter and pulmonary artery catheter were inserted. A femoral arterial line was secured. The urinary catheter was inserted. Analgesia and muscle relaxation will be maintained with intermittent fentanyl 1 µg/kg IV and supplemental doses of vecuronium 0.02 mg/kg IV, respectively. A cerebral oxygen desaturation >20% from the baseline was considered significant. In the case of significant cerebral desaturation, corrective measures were taken as per the Flowchart 1. Postoperatively, the patient was subjected to the MoCA test by the same anesthesiology resident who had evaluated the patient preoperatively and the cognitive function was evaluated at 1 hour, 24 hours, 48 hours, and 1 week postextubation. The anesthesiology resident who performs the test was unaware if NIRS was used intraoperatively or not. The scores were noted. The maximum score to get from this test is 30. According to this, 26 points and above were evaluated as normal, between 19 and 25 points are evaluated as a mild cognitive disorder, and below 19 are evaluated as serious cognitive disorders. 29 statistical analyses of the data obtained were done using the paired ‘t’ test or the Wilcoxon-signed rank test for intergroup comparison and the independent sample t test or the Mann–Whitney U test for intragroup comparison. A p value of less than 0.05 was taken as statistically significant (Tables 1 to 5).

In our study, we evaluated 50 patients with asymptomatic carotid artery disease with lesion >70% who were to undergo OPCAB grafting under general anesthesia. All the patients underwent neuropsychological assessment preoperatively and postoperatively by means of the MoCA score. Out of these, 21 patients received NIRS monitoring and management (group N) and 22 patients did not receive NIRS monitoring (group 0). Seven patients were excluded from the study as they underwent on pump CABG. Out of a total score of 30, MoCA score ≥26 was considered to be normal, 19–25 were considered to have mild cognitive dysfunction, and less than 19 were considered to have severe cognitive dysfunction.

The groups were evaluated with respect to various factors that could potentially confound the results. There were no significant differences between the groups with regard to their demography, medical history, or intraoperative variables. The groups were evenly matched (as evidenced by the nonsignificant “p” value between the groups) with regard to age, gender, height, weight, BMI, education, diabetes mellitus (DM), hypertension (HTN), smoking, COPD, renal insufficiency, preoperative MoCA scores, number of grafts, and time taken for grafting (Tables 1 to 3). 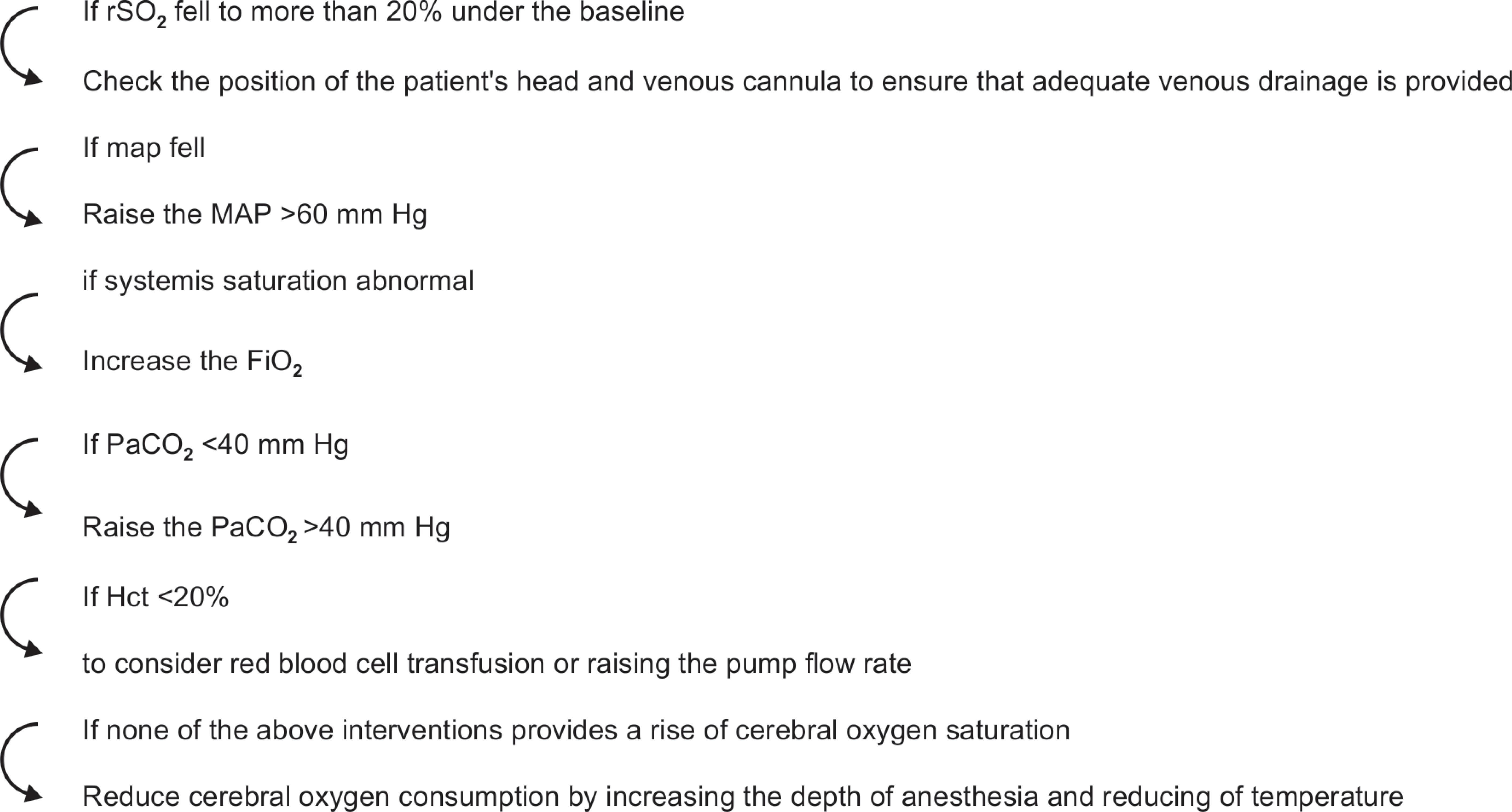 At the outset, it appears that not only the number of patients who developed POCD was less in group N but the severity is also less. However, this difference is not statistically significant as evidenced by the “p” value.

However, this apparent improvement in group N too was not statistically significant.

Even at 1 week, the difference has not been statistically significant between the groups (Tables 4A and B).

In a study conducted by Kara et al.,4 the preoperative mean MoCA scores were comparable between the groups that received NIRS monitoring and the group that did not receive NIRS monitoring. In their study they noted that the decrease in post operative mean MOCA scores was not significant in the group that received NIRS monitoring and was significant in the group that did not receive NIRS monitoring and subsequent management. One major difference between the study conducted by Kara et al.4 and the present study is that they had performed the study on patients who underwent on-pump CABG, while the present study was conducted on patients who underwent OPCAB. One possible explanation for the difference in their study and ours is that probably NIRS monitoring and management have a better utility in preventing POCD in patients undergoing on-pump CABG. On-pump CABG has multiple mechanisms which could lead to POCD like the presence of gaseous microemboli, aortic cross-clamping, etc. However, more studies are needed to make a recommendation on the routine use of NIRS in patients undergoing on-pump CABG even in the presence of asymptomatic carotid artery disease. 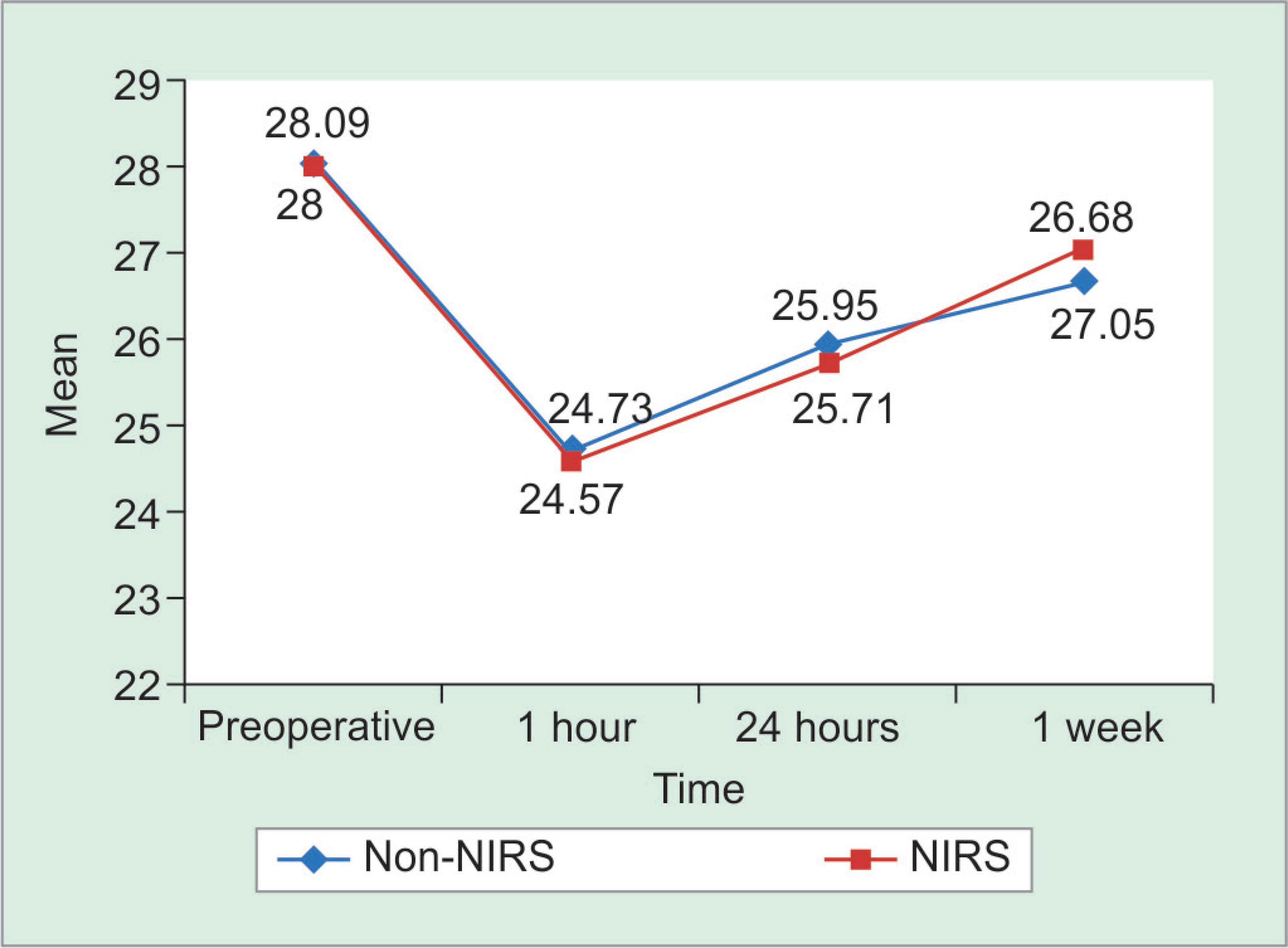 In a study conducted by Jetté et al.,5 the POCD was as high as 80% at 4–7 days after surgery. This is a contrasting result compared to our study. In our study, the occurrence of POCD was 33% in the non-NIRS group and 20% in the NIRS group at 7 days. The possible explanation for this discrepancy is that the median age in their study was 69.72 ± 4.57. In our study, the median age was 60 years. In their study, they concluded that the age >65 years correlated well with the occurrence of early and late POCD. Moreover, in their sample, 46 patients out of 61 had undergone on-pump CABG. These results suggest that since the occurrence of POCD is higher in patients >65 years and lesser in patients who are less than 60 years, NIRS monitoring may have a better application in elderly patients. Also, since a majority of the patients underwent on-pump CABG, NIRS monitoring may be more useful in patients undergoing on-pump CABG. This is in agreement with the results obtained in the study conducted by Kara et al.4 Another possible reason for this discrepancy was that the tests used to assess POCD were different from the study conducted by Kara et al.4 and the present study.

Reents et al.6 in their study have concluded that intraoperative regional cerebral oxygen saturation (ScO2) as assessed by near-infrared spectroscopy with the INVOS 4100 device is not predictive for postoperative cognitive performance in patients undergoing CABG with cardiopulmonary bypass. This study had certain similarities with our study: the median age of the patients in their study was similar to ours (60 years). The occurrence of POCD obtained in their study despite using a battery of 5 neuropsychological tests was 34% which was in agreement with ours. Their result was a stark contrast to certain studies which have found an association between low cerebral oxygenation and poorer cognitive outcome in patients undergoing cardiac operation with CPB.7 However, they have argued that those studies that found a correlation used the mini-mental state evaluation which is a crude instrument. Apart from that, they had used a different NIRS monitor with a different algorithm. Another reason the authors quote is that there is no regional saturation value that is critical of postoperative brain dysfunction. Available literature defines a cutoff of regional cerebral oxygen saturation (rSO2) %3C;50% or a relative decrease %3E;20% from baseline.8 Despite having patients with significant cerebral desaturation, they did not have a larger incidence of POCD. This is because the cutoff value of rSO2 for critical desaturation has not been defined.

Apart from these, we also assessed the secondary outcomes. The mean time taken for extubation was found to be 3.52 hours in the non-NIRS group and 3.36 hours in the NIRS group. This difference was not statistically significant (Table 5).

The mean duration of intensive care unit stay was 5.91 days in the non-NIRS group and 5.52 days in the NIRS group. This difference too was not statistically significant. These results are similar to those obtained by Kara et al.4

Late-onset POCD was not a part of this study. Another drawback is the upper limit of the cutoff age which was taken as 70 years. Increasing the upper limit for age would have probably yielded a positive result.

The application of the NIRS monitor and subsequent management does not statistically decrease the occurrence of early POCD or its severity in patients with asymptomatic carotid artery undergoing OPCAB. It does not reduce the time taken for extubation or the duration of ICU stay. This has been demonstrated in our study.